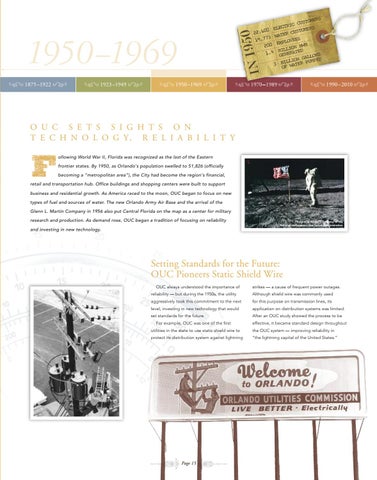 request with the Atomic Energy

a study of the

business and residential growth. As America raced to the moon, OUC began to focus on new types of fuel and sources of water. The new Orlando Army Air Base and the arrival of the

retail and transportation hub. Office buildings and shopping centers were built to support

research and production. As demand rose, OUC began a tradition of focusing on reliability

and investing in new technology.

Glenn L. Martin Company in 1956 also put Central Florida on the map as a center for military Photo ASII-40-5875 Courtesy of the National Aeronautics and Space Administration

Additions to the Lake

of development in the northern

and southern regions of Orange County.

OUC always understood the importance of reliability — but during the 1950s, the utility

Although shield wire was commonly used

aggressively took this commitment to the next

for this purpose on transmission lines, its

level, investing in new technology that would

application on distribution systems was limited.

set standards for the future.

After an OUC study showed the process to be

For example, OUC was one of the first

the OUC system — improving reliability in

protect its distribution system against lightning

“the lightning capital of the United States.”

effective, it became standard design throughout

utilities in the state to use static shield wire to

strikes — a cause of frequent power outages.