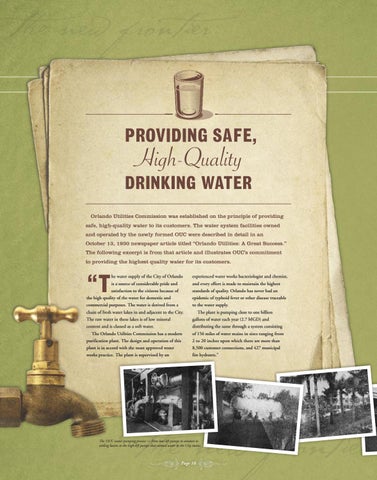 1923–1949 The American Red Cross set up a surgical dressing unit at OUC during WWII.

after the bombing of Pearl Harbor on

began to thrive, fueling growth throughout

for freedom on the battlegrounds of Europe

and the Pacific, OUC helped on the

from the Depression, as defense contracts

homefront — keeping the power on and the

on a major expansion of the water treatment

water flowing for the citizens of Orlando.

and electric generation facilities. The new

And that wasn’t always easy. According to

Orlando: A Centennial History, in June of

would be built west of Lake Highland, south

city faced an acute power shortage due to

of the railroad tracks, directly across from the

lack of oil. Merchants were asked to cut air

conditioning and display lights, and municipal

water main system that replaced many of the

lights were discontinued, with the exception

original mains that were installed beginning

Throughout some of the darkest years in

The following excerpt is from that article and illustrates OUC’s commitment to providing the highest quality water for its customers. he water supply of the City of Orlando is a source of considerable pride and satisfaction to the citizens because of the high quality of the water for domestic and commercial purposes. The water is derived from a chain of fresh water lakes in and adjacent to the City. The raw water in these lakes is of low mineral content and is classed as a soft water. The Orlando Utilities Commission has a modern purification plant. The design and operation of this plant is in accord with the most approved water works practice. The plant is supervised by an

experienced water works bacteriologist and chemist, and every effort is made to maintain the highest standards of quality. Orlando has never had an epidemic of typhoid fever or other disease traceable to the water supply. The plant is pumping close to one billion gallons of water each year (2.7 MGD) and distributing the same through a system consisting of 156 miles of water mains in sizes ranging from 2 to 20 inches upon which there are more than 8,500 customer connections, and 427 municipal fire hydrants.”

to Lake Lucerne. Up to this point, the largest

what would become a legacy of community

water main in the City’s chief artery was

service — opening its doors to the American

Red Cross, which set up a surgical dressing

With the addition of new infrastructure

unit on the third floor of OUC’s office building.

came the need for a centralized service

One of the first such units in the war effort, it

served as the state’s training headquarters for

dressings were made at OUC, representing

offices. The Yard was constructed on the north

During the war, the economies of Orlando and other Florida cities were able to rebound Lake Highland Service Yard construction circa 1942.

The OUC water pumping process — from low-lift pumps to aerators to settling basins to the high-lift pumps that carried water to the City mains.

this nation’s history, OUC set the stage for

shore of Lake Highland, on a private rail siding, adjacent to the Lake Ivanhoe Plant.