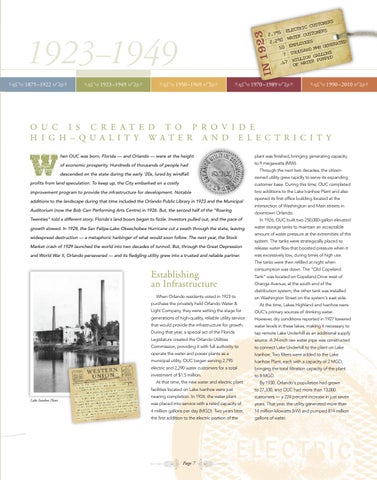 • OUC moves into its new

plant is placed into service.

hen OUC was born, Florida — and Orlando — were at the height

of economic prosperity. Hundreds of thousands of people had

descended on the state during the early ‘20s, lured by windfall

customer base. During this time, OUC completed

improvement program to provide the infrastructure for development. Notable

two additions to the Lake Ivanhoe Plant and also

Auditorium (now the Bob Carr Performing Arts Centre) in 1926. But, the second half of the “Roaring Twenties” told a different story. Florida’s land boom began to fizzle. Investors pulled out, and the pace of growth slowed. In 1928, the San Felipe-Lake Okeechobee Hurricane cut a swath through the state, leaving widespread destruction — a metaphoric harbinger of what would soon follow. The next year, the Stock

Light Company, they were setting the stage for

When Orlando residents voted in 1923 to

Orange Avenue, at the south end of the distribution system; the other tank was installed on Washington Street on the system’s east side. At the time, Lakes Highland and Ivanhoe were OUC’s primary sources of drinking water. However, dry conditions reported in 1927 lowered

that would provide the infrastructure for growth.

water levels in these lakes, making it necessary to

During that year, a special act of the Florida

Commission, providing it with full authority to

to connect Lake Underhill to the plant on Lake

operate the water and power plants as a

Ivanhoe. Two filters were added to the Lake

Ivanhoe Plant, each with a capacity of 2 MGD,

electric and 2,290 water customers for a total

bringing the total filtration capacity of the plant

consumption was down. The “Old Copeland Tank” was located on Copeland Drive west of

At that time, the new water and electric plant

system. The tanks were strategically placed to

The tanks were then refilled at night when

was excessively low, during times of high use.

and World War II, Orlando persevered — and its fledgling utility grew into a trusted and reliable partner.

Market crash of 1929 launched the world into two decades of turmoil. But, through the Great Depression

OUC has more than

Through the next two decades, the citizenowned utility grew rapidly to serve its expanding

profits from land speculation. To keep up, the City embarked on a costly

building at the corner of

nearing completion. In 1924, the water plant

was placed into service with a rated capacity of

years. That year, the utility generated more than

the first addition to the electric portion of the