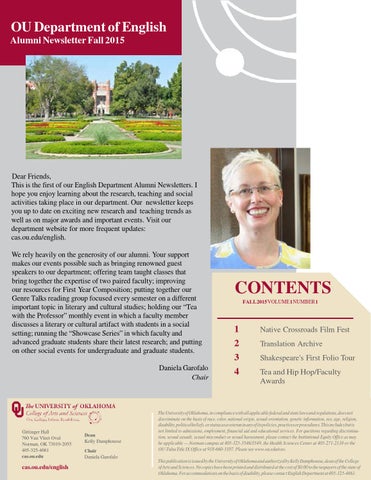 Dear Friends, This is the first of our English Department Alumni Newsletters. I hope you enjoy learning about the research, teaching and social activities taking place in our department. Our newsletter keeps you up to date on exciting new research and teaching trends as well as on major awards and important events. Visit our department website for more frequent updates: cas.ou.edu/english. We rely heavily on the generosity of our alumni. Your support makes our events possible such as bringing renowned guest speakers to our department; offering team taught classes that bring together the expertise of two paired faculty; improving our resources for First Year Composition; putting together our Genre Talks reading group focused every semester on a different important topic in literary and cultural studies; holding our “Tea with the Professor” monthly event in which a faculty member discusses a literary or cultural artifact with students in a social setting; running the “Showcase Series” in which faculty and advanced graduate students share their latest research; and putting on other social events for undergraduate and graduate students. Daniela Garofalo Chair

The University of Oklahoma, in compliance with all applicable federal and state laws and regulations, does not discriminate on the basis of race, color, national origin, sexual orientation, genetic information, sex, age, religion, disability, political beliefs, or status as a veteran in any of its policies, practices or procedures. This includes but is not limited to admissions, employment, financial aid and educational services. For questions regarding discrimination, sexual assault, sexual misconduct or sexual harassment, please contact the Institutional Equity Office as may be applicable — Norman campus at 405-325-3546/3549, the Health Sciences Center at 405-271-2110 or the OU-Tulsa Title IX Office at 918-660-3107. Please see www.ou.edu/eoo. This publication is issued by the University of Oklahoma and authorized by Kelly Damphousse, dean of the College of Arts and Sciences. No copies have been printed and distributed at the cost of $0.00 to the taxpayers of the state of Oklahoma. For accommodations on the basis of disability, please contact English Department at 405-325-4661.

Native Crossroads Film Festival and Symposium Yearly, OU puts on the Native Crossroads Film Festival and Symposium, which showcases films about Native people’s stories and lives. The English Department’s Joshua Nelson, Native American Studies scholar who specializes in both Native film and literature, helps organize this festival. Each year, the festival invites speakers who show how academic research and community engagement can be inspired by the artistry we see in cinematic and media work. Weaving these threads together is one of the key features that makes Native Crossroads a distinct and relevant film festival. Key speakers have included Winona LaDuke, Suzan Shown Harjo, and numerous directors and scholars. That the festival has secured such important and prominent speakers testifies to the resonance of the films and topics in Indian country. Audiences turn out in big numbers for the screenings, especially the headliner feature films shown in the evenings. There

have been several standing-room only crowds in the 170-seat Kerr Auditorium, Sam Noble Museum. Native Crossroads is a free event, but getting speakers, performers and directors into town, paying screening fees, and all the costs for a three-day festival adds up in a hurry. Generous gifts from the Chickasaw Nation and others have helped finance the event. Donations pay for space rental, travel and lodging for guests, and for honorariums that filmmakers — who generally don’t make very much on their movies — use to help finance their next projects. For the future, Nelson explains, the festival will provide “production workshops and courses tied to the festival so that even more Native filmmakers, like Kyle Bell, who was inspired to make his first film by attending the festival, can tell their own stories in their own creative ways.” The goal, Nelson points out, is to create “new spaces for Native films and filmgoers…the Chickasaw Nation and our other contributors will see a healthy return on their investment.”

papers of Wai-lim Yip, the founder of the field of Chinese-English Comparative poetics. The mission of this new archive, according to Stalling, is to reconfigure the material conditions for Translation Studies with a shift from “comparative analysis” (comparing translations to their originals) to research supported by archived/ documented/ and curated historical texts that Stalling believes will enable new and exciting interpretive claims. For more information about the archive see Stalling’s article in Asia Pacific Perspectives Spring Summer 2014, www.usfca. edu/center-asiapacific/perspectives/v12n2/Chinese_ Literature_in_Translation/ as well as the following article published by Chinese Literature Today: www.ou.edu/clt/04- 02/featuredScholar.html. Or watch a video conversation between Stalling and Howard Goldblatt here: http://asiasociety.org/video/art-bringingchinese-literature- world.

English Department Professor Jonathan Stalling was named the curator of a new special collection in the OU Library. The Chinese Literature Translation Archive now houses the papers of America’s most productive (and well-known and respected) translator of Chinese Literature, Howard Goldblatt, spanning his career of nearly 40 years along with roughly 6,000 volumes from his personal library. The collection also acquired the papers of Wolfgang Kubin, Europe’s most productive and well-known translator of Chinese poetry. Both collections include copious correspondence with Chinese authors and poets spanning decades, drafts, unpublished hand-written poems and many other important historical documents. This year the archive will also acquire the English page 3

In honor of the 400th anniversary of Shakespeare’s death in 1616, First Folio! The Book that Gave Us Shakespeare will tour all 50 states, Washington, D.C., and Puerto Rico. Beginning January 4, 2016 and running for a month, the First Folio exhibit and accompanying events will take place at OU. Several faculty in the English Department are part of a team organized by the Center for Medieval and Renaissance Studies, under the direction of Joyce Coleman, to bring this exhibit to OU. English professors David Anderson, Joyce Coleman, Kenneth Hodges and Su Fang Ng helped draft a program of accompanying events, including talks, performances, and films which are open to the public. Information on these events is available at cas.ou.edu/first-folio. The exhibit of the First Folio will be hosted by the Sam Noble Museum. The First Folio is the first complete collected edition of Shakespeare’s plays, published in 1623, seven years after his death. Compiled by two of Shakespeare’s fellow actors, it preserves 36 of Shakespeare’s plays. Without it, we would not have 18 of those plays, including Macbeth, Julius Caesar, Twelfth Night, The Tempest and Antony and Cleopatra. OU&#39;s own Second Folio will be on display in Bizzell Library as part of the Galileo Exhibit. Truly an exciting time for us! The Sam Noble Oklahoma Museum of Natural History is located on the University of Oklahoma Norman campus at J. Willis Stovall Road and Chautauqua Avenue. For accommodations on the basis of disability, call (405) 325-4712 or visit www.SamNobleMuseum.org. FALL 2015

Department of English Newsletter Tea and Hip Hop Catherine John’s English 4283 &quot;Hip Hop as Poetry, Literature, and Cultural Expression,&quot; one of the English Department’s most popular courses, offers an intensive study of a contemporary and controversial art form. Dr. John started offering her muchloved Hip Hop class for the first time in 2006. By examining the lyrics and music, students come to see that Hip Hop is deceptively simple and it cannot be understood without studying the historical and cultural context that produced it.

Students discover that most artists have songs that are equally as profound as some are profane and the substance of the larger message when viewed from the standpoint of social location is unexpectedly and deeply philosophical. As artist David Banner says, &quot;Hip Hop reflects the state of America, but America makes it look a lot prettier.&quot; An exciting part of her course involves performance. Students are required to do three performances of their own: Spoken Word Poems; a Technique segment -- memorization of the

lyrics of one of the artists; and a freestyle performance. The class is powerful for the students because the music keeps changing and it allows them to continuously address current events through deep discussions about culture, stereotypes, prejudices and hidden truths. The art form is alive; it is a part of a living oral tradition that has had the power to impact the capitalist world in terms of selling the culture of the oppressed for better and sometimes for worse. It is a vehicle for the expression of pain and violence, joy and sadness, rebellion and revolution, as well as trauma and resilience. John recently introduced the talents of her students to one of our “Tea with the Professor” events in which students and alumni performed and discussed issue of race and culture over tea.

Faculty Awards James Zeigler is this year’s recipient of the Longmire Award for Teaching. He joined the Department of English in 2007 and quickly became one of our students’ favorite teachers. His courses are exciting and innovative. For example, when he teaches the Early American Literature survey, he has students work on a group project on the Salem Witch Trials of 1692. Students form “law firms” to investigate the case against a person put to death for witchcraft. In 2008, Zeigler revived the English Department’s course on The Graphic Novel, which responds to the growing popularity and critical acclaim of artful, brilliant, and literary comic books. He also teaches courses in 20th Century American Drama, Literary and Critical Theory, and Cold War Culture. This spring he debuted a new course for advanced undergraduates on James Baldwin and the literature of the Civil Rights Movement.

Read about the events and projects in the College of Arts and Sciences' Department of English at the University of Oklahoma. 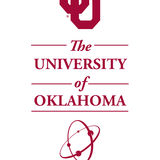