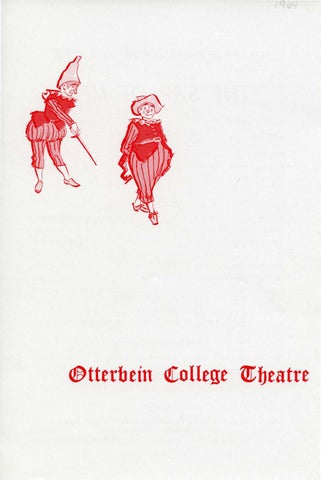 Piano: Ron Hanft and Diana Shawd. Percussion: Frank Tippett SYNOPSIS OF THE SCENES The action takes place at home and in the city. ACTI Intermission ACT II *Denotes Members of Cap and Dagger Dramatics Club * *Denotes Members of Theta Alpha Phi Dramatics Fraternity "The Sap of Life" is presented through special arrangements with the Playwrights

DISTINCTION PROJECTS In rec::nt ye~rs the Orre1oein College Theatre has established the practice of encouraging superior students interested in college teaching or professional theatre to undertake the direction of major theatre productions as part of the requirement for "graduation with distinction." Tonight's production of "The Sap of life" has been directed by Senior student Jack Wright as part of his distinction project. Other elements of the project include research into the history of the American musical comedy, recent trends in musicals, staging techniques for musicals in aren,1 theatre, and a written report of this research and its practical applicarion as evidenced in this production. To be eligible for entrance into the distincti011 program a student must have a 3.5 cumulative point average in his major field and a total point average of 3.0. In addition the Speech Department requires that the student must show superior talent and ability in order to be eligible for this specific type of creative distinction project. During the past three years Jack Wright has participated signifi_ candy in the Otterbein College program by appearing in several productions with leading roles, by winning two State college oral interpretation contests, by making significant contributions in back stage activities, by directing a difficult one-act play, and by making substantial contributions to the college through student leadership. Jack plans to enter graduate school next fall and work toward advanced degrees in theatre. Other recent graduates who have participated in this or a departmental program by directing major theatre productions include Richard Davis and John Soliday. Davis directed "Tartuffe" and Soliday directed "The Emperor's New Clothes" and wrote a one-act which we produced. Davis is now an instructor in theatre at Pennsylvania State University and Soliday is an instructor in theatre at Wooster College. We hope you have enjoyed participating in this phase of College Theatre threefold objective: ENTERTAINMENT, ARTISTIC and CULTURAL APPRECIATION, and EDUCATION - for both our spectators and participants. CWD SHOPPING FOR CHRISTMAS PRESENTS? Why not give tickets to "Anastasia"? Tickets will be on sale at the Box-Office during Intermission.