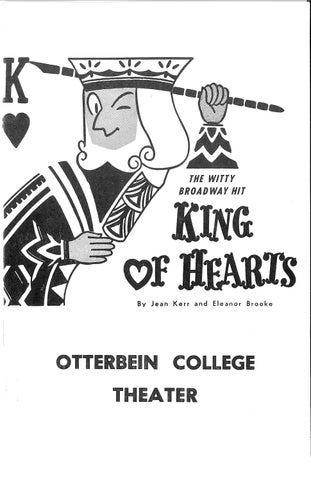 By Jean Kerr and Eleanor Brooke

"The House of Fine Foods"

by Jean Kerr and Eleanor Brooke

This play is produced by special arrangement with Dramatists Play Service, Inc.

HALLMARK GREETING CARDS A Card For Every Occasion

THE TRADITION Tonight's production marks the thirteenth annual student presentation since the tradition was revived in 1948. It is produced under the auspices of Cap and Dagger Dramatic Society.

ABOUT THE PLAY The play was originally conceived by Eleanor Brooke and was written as an exercise in the drama course at Catholic University in which she was a pupil of Walter l(err, drama critic of the New York Herald Tribune. Her teacher encouraged her to rewrite the play, which she did several times, and she finally asked a fellow drama student Jean Kerr, wife of Mr. Kerr, to collaborate with her in the final revision. The p!ay opened on April l, 1954, with Cloris Leachman, Jackie Cooper, and Donald Cook in starring roles, and closed on November 27 of the same year. Otterbein is very happy to present this modern comedy.

"It Pays to Save Where Saving Pa,,s"

SETTING The action of the play takes place in Larry Larkin's studio in New York City at the present time.

CAST OF CHARACTERS in Order of Appearance

Talbot's Flowers All Types of Flowers

ON STAGE NANCY MYERS is seen 1n the role of Dunreath. She has appeared on the Cowan Hall stage in the Freshman OneActs, The IBarretts of Wimpole Street, The Rainmaker, and Taming of the Shrew. Nancy is a speech, English and education major from Canton, Ohio.

JIM BEBEE appears as Larry in tonight's production. Jim is a sophomore from Ridgewood, New Jersey, and is a speech and English major.

ON STAGE (cond) CHERYL DOLLISOl\l is seen in the role of Jeniella. She is no stranger to the Cowan Hall stage for she has been seen in the Freshman One Acts, Box and Cox, Ah, Wilderness!, Oklahoma! and Taming of the Shrew. A junior from Salesville, Ohio, Cheryl is majoring in speech and pre-law. TOM PARKER, a sophomore from Pittsburgh, Pennsylvania, creates the role of Mike. He has come to Otterbein after two years in the Air Force and is majoring in speech. RICHARD BERRY, a freshman speech major, plays the part of Francis. Dick has appeared in the Taming of the Shrew and the Freshman One Acts. He is from New Cumberland, Pennsylvania. DICK SPICER creates the role of Joe in tonight's performance. He has been seen in the Freshman One Acts, Tam~ ing of the Shrew, Arsenic and Old lace, Squaring the Cir~ de, Ah, Wilderness!, and Oklahoma! Dick is a pre-law student from Columbus, Ohio. MIKE HOHN is seen in tonight's production as Norman. He is in the sixth grade at Hawthorne Elementary School. Mike appeareed two years ago in Lambert Hall in the Operetta "The Lowland Sea." LARRY GREEN is making his initial appearance on Cowan stage as Mr. Hobart. He is a junior from Newark, Ohio and is majoring in Economics.

TAFFY, a very important collie, is three years old and will celebrate her fourth birthday in July. She is fond of chi!dren and likes to ride in cars. Her stage name in tonight's show is Happy.

PAT LAMB, a senior, has served as technical director for

Ah, Wilderness!, Taming of the Shrew, Diary of Anne frank, and King of Hearts. He is an elementary education major from New Rome, Ohio, and appears on stage tonight as the Policeman.

The student director for tonight's production, MISS MARY ANN ANDERSON, is a familiar person to Otterbein audiences. Besides King of Hearts, she has directed a freshman one - act a n d appeared in many of the college productions, including The Bride Wore Red Paiamas, The Barretts of Wimpole Street, Oklahoma!, Squaring the Circle, Ah, Wilderness! and Taming of the Shrew. A senior elementary education major,

PLEASE SUPPORT OUR ADVERTISERS It 1s their ccM:>peration that makes

SPOTLIGHT ON MAY DAY PLAY The Annual May Day festivities of Otterbein will take place on May 13 and 14. The Cap and Dagger Club will participate in the merrymaking by bringing one of the greatest melodramas in American Theatre history to the Cowan Hall Stage.

TEN NIGHTS IN A BARROOM is perhaps the greatest, best-known, and most often produced melodrama in America. The Otterbein production will feature numerous old-time variety acts, mustachio-ed villains, palpitating hero and heroine, rinky-tink piano, and many other surprises. You will not want to miss this visit into the past when one of the greatest traditions in the American theatre will come alive on the Cowan Hall stage.

MAY DAY PLAY Ten Nights in A Barroom

Due to circumstances beyond our control, we regret to inform our season ticket holders that the MODERN DANCE SHOW, originally scheduled for March 17, has been cancelled.