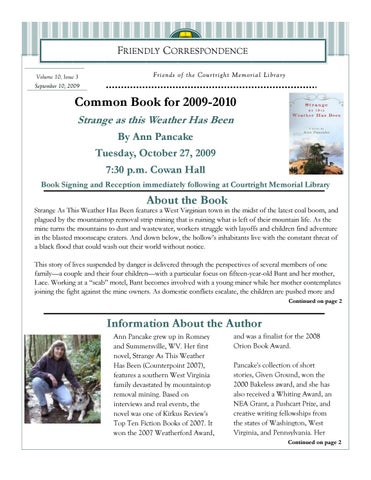 Strange As This Weather Has Been features a West Virginian town in the midst of the latest coal boom, and plagued by the mountaintop removal strip mining that is ruining what is left of their mountain life. As the mine turns the mountains to dust and wastewater, workers struggle with layoffs and children find adventure in the blasted moonscape craters. And down below, the hollow’s inhabitants live with the constant threat of a black flood that could wash out their world without notice. This story of lives suspended by danger is delivered through the perspectives of several members of one family—a couple and their four children—with a particular focus on fifteen-year-old Bant and her mother, Lace. Working at a “scab” motel, Bant becomes involved with a young miner while her mother contemplates joining the fight against the mine owners. As domestic conflicts escalate, the children are pushed more and Continued on page 2

Information About the Author Ann Pancake grew up in Romney and Summersville, WV. Her first novel, Strange As This Weather Has Been (Counterpoint 2007), features a southern West Virginia family devastated by mountaintop removal mining. Based on interviews and real events, the novel was one of Kirkus Review&#39;s Top Ten Fiction Books of 2007. It won the 2007 Weatherford Award,

and was a finalist for the 2008 Orion Book Award. Pancake&#39;s collection of short stories, Given Ground, won the 2000 Bakeless award, and she has also received a Whiting Award, an NEA Grant, a Pushcart Prize, and creative writing fellowships from the states of Washington, West Virginia, and Pennsylvania. Her Continued on page 2

Coming soon...a Book Signing and Reception Date to be Announced

Once upon a time a dog was looking for a home. Not just any home...the perfect home, to be exact. Travel around the world with Dog as he visits different countries to see how other dogs live. Will there be a happy ending to his journey?

“About the Book” Continued from front cover

more outside among junk from he floods and felled trees—the only nature the youngest ones have ever known. But Bant has other memories and is as curious and strong-willed as her mother. Ultimately, through her eyes, we come to discover the very real threat of destruction that looms in the landscape and in her home. Based on interviews and real events, and magnificently drawn together by Ann Pancake, the stories of these people merge and finally explode into a harrowing, yet life-affirming, conclusion. (http://annpancake.blogspot.com) Visit http://www.otterbein.edu/commonbook/ for more information about the Common Book. “About the Author” continued from front cover

fiction and essays have appeared in journals and anthologies like Glimmer Train, Poets and Writers, Narrative, and New Stories from the South. She earned her BA in English at West Virginia University and a PhD. in English Literature from the University of Washington. Currently, she teaches in the low-residency MFA program at Pacific Lutheran University. (http://annpancake.blogspot.com/2007/04/biography.html) Visit http://www.otterbein.edu/commonbook/ for more information about the Common Book Author, Ann Pancake or her website http://annpancake.blogspot.com/2007/05/welcomer.html

“The New Otterbein Room” ARCHIVES UPDATE In late July, Archivist Stephen Grinch and Library Director Lois Szudy purchased furniture for the new Research Room and Museum. Five new display cases, two large worktables and a dozen high-backed chairs are on order from the Amish Originals furniture store in Westerville. They should be ready for delivery by early October. In the meantime the Otterbein Service Department will prepare the new Research Room for their arrival. This will include fresh paint on the walls, some built-in shelves to display special archival items, and the ceiling will be completely remodeled in the style of the classrooms in Towers Hall. We hope to have the new Reading Room open for visits by the Inauguration/Homecoming/Marching Band Centennial weekend!. Until this time the Otterbein Room will be open by appointment only, Monday through Friday between 10:00 and 6:00. To schedule an appointment please call Stephen at (614) 823 – 1761 or contact him via e-mail at sgrinch@otterbein.edu.

Pearl Rexford â&amp;#x20AC;&amp;#x153;Rexâ&amp;#x20AC;? Ogle, born June 27, 1928 to Pearl R. and Winnie Bernice (McBroom) Ogle, died peacefully in his sleep on New Year&#39;s Day. His father, mother, and brother Donald preceded him in death. He is survived by Marcia, his faithful, loving wife of 56 years; their 6 children, Kim VanWassen (Bob), Craig (Mary Ann), Sue Ankrom (Jeff), Colleen, Jennifer Freshly (Lindsay), Heather Rodwell (John); 14 grandchildren; brother, Gary (Maryann); and dear friend, Myron Campbell (Chris). Rex grew up in Columbus, matriculating from East High School, and then attended to Capital University, Ohio State University, and Michigan State University, where he received his Ph.D. in Chemistry. Dr. Ogle worked as a research chemist for the Goodyear Atomic Corporation in Piketon for 7 years and then answered a calling to teach at Otterbein College for 29 years. He was a 50-year member of the American Chemical Society and was past president of the Central Ohio chapter. As a professor he was more than a teacher and researcher, but also a mentor whose commitment to his students extended beyond the classroom, even providing many a place to stay when needed. He felt tremendous pride in their accomplishments, as he did his children&#39;s. As a family man, he was hardworking, fun, adventurous, and totally dedicated, a true partner with Marcia, and an unending source of encouragement to his children and grandchildren, who were his greatest joy. Rex possessed a quiet, but radiant faith. During 45 years as a member of Church of the Master UMC, he served in many positions of leadership but most often led by example with a heart for improving the conditions and character of others&#39; lives through countless acts of kindness and assistance, large and small. Heifer Project International, Habitat for Humanity, the Interfaith Hospitality Network, and The Open Shelter were among organizations to which he gave substantial time and energy. He touched many lives and will be sorely missed. His family appreciates the loving care re received in his final months from the staff at Friendship Village of Columbus. Calling hours were Monday, January 4, 2010 at 4:306:30 p.m. at The Church of the Master, 24 N. Grove St., Westerville, where a memorial service was held at 11 a.m., on Tuesday January, 5, 2010. Rev. Todd Anderson officiated. Friends may contribute in his memory to Heifer Project International, c/o Church of the Master. Arrangements handled by HILL FUNERAL HOME, Westerville. (Columbus Dispatch, January 3, 2010: B7)

Other memberships include the National Society of Professional Engineers and the navy League of the United States. The family received friends t Hill Funeral Home in Westerville on Monday, June 1, 2009 at 6-8 pm. The funeral service, with the Rev. Todd Anderson officiating, along with the Rev. John Wells, was held at the Church of the master on the corner of West Main Street and N. Grove Street, in Westerville on Tuesday, June2 at 10:30 am, a reception followed. Friends may contribute to the Sylvia and Waid Vance Endowed Scholarship, Otterbein College Development office, One Otterbein College, Westerville, OH 430812 or to the Memorial Fund, church of the Master, 24 n. Grove St., Westerville, Oh 43081. (Columbus Dispatch, May 31, 2009: B7)

2009-2010 Friends Bookmark Winner! About the Artist My name is Meagan Navarre and I am a freshman English and Art major concentrating in Creative Writing and Photography. I was born and raised in Toledo, Ohio and attended Sylvania Southview High School. I came to Otterbein because of the small size of the school and the fact that it had both of my intended majors. I also knew that at Otterbein I would be able to work with both the English and the Art Departments to correlate my classes, and be able to graduate on time. Outside of classes, I participate in student groups such as Starving Artists, Catholic ACTS, and most recently, the Tau Delta sorority. After earning my degrees, I hope to get a job as a photographer at either a travel or nature centered magazine while I write novels, particularly of the fantasy genre. My dream job would be to work for National Geographic and travel around the world, but we will see how that goes. Although, it never hurts to dream. About the Bookmark When I began this project, I knew I wanted to design a bookmark that did not necessarily have an obvious correlation to libraries or books. As I began brainstorming ideas, the image of a puzzle, or puzzle pieces came to mind, and after playing around with different designs, I created this design. The different puzzle pieces represent the individual elements of a story that come together to form a cohesive whole. As readers, we must put together these individual pieces to understand the meaning of a story, hence why the pieces are all separate. The font of the word “friends” harkens back to when manuscripts were originally written on typewriters. Lastly, to tie the bookmark to Otterbein, I chose to color the puzzle pieces red.

Staff updates The search committee (Lois Szudy, Becky Rollo, Bill Stoddard and Lizz Zeitz) for the Graduate Assistant – Circulation is happy to report that we have a new staff member. His name is Bill Pearce and he will officially start Tuesday, August 25, 2009. Bill is working toward his Masters of Teaching (MAT) degree in the Education department. He has taken a number of graduate education classes at Otterbein this summer. Bill is a graduate of Otterbein and received a BA degree in Business Administration. He has been working for Bank One/Chase for a number of years, while coaching children sports teams, and recently decided to change his career and prepare for his dream job of teaching. Bill’s wife, Jennifer, works for Otterbein as the Executive Director of Marketing and Communications. They have two daughters.

New Member Choose the donation category most appropriate for you:

To insure proper gift credit, please make checks payable to Otterbein College. Contributions are tax deductible in accordance with Internal Revenue Service rules. PLEASE COMPLETE One benefit to being a Friend is borrowing privileges at the library. Are you interested in receiving borrowing privileges?

Drivers License Number (required) By signing (below) I agree that I will abide by the loan policies of the Courtright Memorial Library. I will be responsible for all items I check out and their replacement costs should they become lost, stolen, or damaged. I understand that the Courtright Memorial Library reserves the right to take collection actions if my account is over 60 days

Exp. Date (Signature required below) THIS SIDE FOR OFFICE USE ONLY

Please note that your membership expires on the date shown on your mailing label. To renew, fill out the enclosed form and mail it to Lois Szudy at the above address.