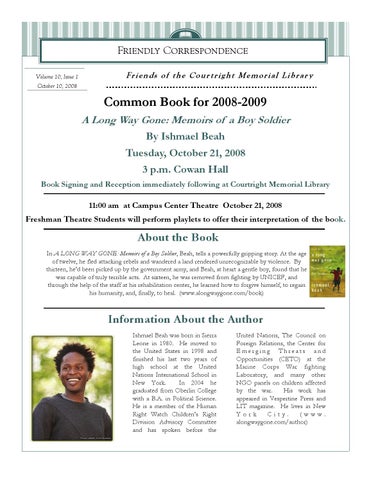 11:00 am at Campus Center Theatre October 21, 2008 Freshman Theatre Students will perform playlets to offer their interpretation of the book.

About the Book In A LONG WAY GONE: Memoirs of a Boy Soldier, Beah, tells a powerfully gripping story. At the age of twelve, he fled attacking rebels and wandered a land rendered unrecognizable by violence. By thirteen, heâ&amp;#x20AC;&amp;#x2122;d been picked up by the government army, and Beah, at heart a gentle boy, found that he was capable of truly terrible acts. At sixteen, he was removed from fighting by UNICEF, and through the help of the staff at his rehabilitation center, he learned how to forgive himself, to regain his humanity, and, finally, to heal. (www.alongwaygone.com/book)

Information About the Author Ishmael Beah was born in Sierra Leone in 1980. He moved to the United States in 1998 and finished his last two years of high school at the United Nations International School in New York. In 2004 he graduated from Oberlin College with a B.A. in Political Science. He is a member of the Human Right Watch Childrenâ&amp;#x20AC;&amp;#x2122;s Right Division Advisory Committee and has spoken before the

United Nations, The Council on Foreign Relations, the Center for Emerging Threats and Opportunities (CETO) at the Marine Corps War fighting Laboratory, and many other NGO panels on children affected by the war. His work has appeared in Vespertine Press and LIT magazine. He lives in New York City. (www. alongwaygone.com/author)

Join us for a Book Signing and Reception Sunday, November 9, 2008 4 p.m. at Courtright Memorial Library

Reflections of Erin The Importance of Belonging, Relationships, and Learning with Each Other

By Barbara McKenzie, Design by Chris McKenzie, Art of Possibility Press, 2008 A NEW BOOK ABOUT REDISCOVERING THE VISION OF INCLUSION

About the Book When the inclusive education movement began several years ago, many used the argument that it was purely for social benefits. The curriculum used for children with disabilities that were placed in general education classrooms was often very different from what was being taught in those classrooms. Slowly the movement began to stress the importance of accessing the curriculum and making accommodations, modifications, or enhancements as needed so that ALL students could learn together. In recent years the focus has been on academic standards and identifying deficits, which has often led to more sorting, pull-out, and remediation for a variety of students, including those with disabilities, rather than inclusive classrooms and schools. The importance of discovering the gifts of each person, developing relationships, and embracing our interdependence are often not considered as valid in evidence-based research and standards, curriculum development, or instructional practices. Barbara McKenzie hopes to shift the focus back to creating inclusive learning communities by sharing evidence that she and others have gathered from the experience of knowing and loving Erin. Conveyed in the form of keen observations, heartfelt surprises, and insightful reflections, the stories and images inspired by Erin McKenzieâ&amp;#x20AC;&amp;#x2122;s life demonstrate the rich connections and relationships that result from an inclusive learning community.

About the Author Barbara McKenzie is an advocate, presenter, and organizer of gatherings about the importance of creating inclusive communities. In college during the late â&amp;#x20AC;&amp;#x2DC;60s, she considered herself a social justice activist, but when Erin was born and diagnosed with a disability, she realized how much she had to learn about welcoming everyone and discovering the gifts in each of us. Over the last two decades she has continued to learn with dear friends and leaders in the movement for full inclusion. With the loving support of her family, her passion has grown and endures.

A Reader’s Nightmare By Jim Bailey

A man reads to fall asleep. He begins to dream of his books. “Rebecca”, “Mrs. Danver’s”, “Scarlet O’Hara”, “Jane Eyre”, “Mark Twain” and others visit him during his night. Join us for a humorous look at a series of parodies of literary characters!

The Otterbein Room has moved! Over the past three weeks the historical collection of the college has moved from its cramped quarters on the third floor of the Courtright Memorial Library to the basement area formerly occupied by WOCC-TV. This move doubles the amount of storage space available to the archives, which will allow the many treasures of Otterbein’s past to be properly displayed for the first time in over a decade. Archivist Stephen D. Grinch and his team of student workers will spend Fall quarter and Christmas break organizing the collections and preparing the new museum space, which will be named in memory of Alice Salt. During this time the Otterbein Room will be open by appointment only, Monday through Friday between 10:00 and 6:00. To schedule an appointment please call Stephen at (614) 823 – 1761 or contact him via e-mail at sgrinch@otterbein.edu. The area previously occupied by the Archives will be the new home to Center for Teaching and Learning.

Congratulations to Rares and Collette on the birth of their daughter. Born October 9th at 12:30 am. 7 lbs 13 oz. Pictures to come!

Congratulations to Staff Members: Stephen Grinch (left) and Rebecca RaeskeGrinch (right) on the birth of their daughter

A Farewell to Friends Lost

William Oliver Amy William Oliver Amy, age 78, of Westerville, Ohio, beloved husband, father, professor, and teacher, died September 5, 2008, of complications due to pneumonia. He was born and raised in Waterloo, Ontario, Canada. He was a graduate of the University of Western Ontario, with additional degrees from Garrett Theological Seminary (UM), New York Theological Seminary, and the University of Toronto. He was pastor of St. Timothy Church in Kitchener, Ontario, for eight years, until his appointment to teach in the Religion and Philosophy Department of Otterbein College, Westerville, Ohio, in 1962. He later served 15 years at Monmouth College in Monmouth, Illinois, as Dean and Professor. Following retirement in 1993, he served as adjunct professor at Otterbein College for 12 years. During his years in Westerville he was an active member and Sunday School Teacher at The Church of The Master. William Amy is survived by his wife, Floral (Mache); son, Jonathan and Patricia (Gahris). Grandchildren, Sarah and David; daughter, Jennifer Amy-Dressler and Dale Dressler, Grandchildren, Noah and Grace; daughter, Christine S. Amy; brothers, Reginald, Paul, Don and Ron; sisters, Joan Woods and Mary Strome. He was preceded in death by his parents Oliver and Lillian Amy, brothers Nelson, Bruce and Ross and sister Ruth. A celebration of Billâ&amp;#x20AC;&amp;#x2122;s life was held at The Church of The Master United Methodist at 2 p.m. Saturday, September 13. His family received friends following the service at 3 p.m. in the Fellowship hall at the Church. Arrangements by HILL FUNERAL HOME, Westerville. Donations, in lieu of flowers, may be made to the Amy Family Interfaith Lecture Series at The Church of The Master, (Westerville), the American Heart Association or Otterbein College in memory of Bill Amy. (Columbus Dispatch, September 12, 2008: B4)

Wanda Lee Gardner, age 83, of Westerville, passed away Saturday, August 2, 2008 at The Village of Westerville. Wanda served the Westerville area for 53 years as a pharmacist. She was co-owner for 37 years of Brinkman Rexall Drugstore with her pre-deceased husband, Alvin. She hosted 36 foreign students from 9 different countries and was a member of The Church of The Master, U.M. Survived by sons, John (Victoria) of Perkinsville, VT and Richard (Mitsuyo Takeda) of Tokyo, Japan. Friends called 5-8 p.m. Friday, August 8th at the HILL FUNERAL HOME, 220 S. State Street., Westerville. Private family interment at Blendon Central Cemetery. A Memorial Service was held at 11 a.m. Saturday, August 9, 2008 at The Church of The Master, U.M. Friends may contribute in her memory to Central Ohio Parkinson Society, P.O. Box 16126, Columbus, OH 43216-6126 (Columbus Dispatch, August 5, 2008: B6)

New Member Choose the donation category most appropriate for you:

To insure proper gift credit, please make checks payable to Otterbein College. Contributions are tax deductible in accordance with Internal Revenue Service rules. PLEASE COMPLETE One benefit to being a Friend is borrowing privileges at the library. Are you interested in receiving borrowing privileges? Drivers License Number (required) By signing (below) I agree that I will abide by the loan policies of the Courtright Memorial Library. I will be responsible for all items I check out and their replacement costs should they become lost, stolen, or damaged. I understand that the Courtright Memorial Library reserves the right to take collection actions if my account is over 60 days

Exp. Date (Signature required below) THIS SIDE FOR OFFICE USE ONLY

Please note that your membership expires on the date shown on your mailing label. To renew, fill out the enclosed form and mail it to Lois Szudy at the above address.