Program Crimes of the Heart 1984 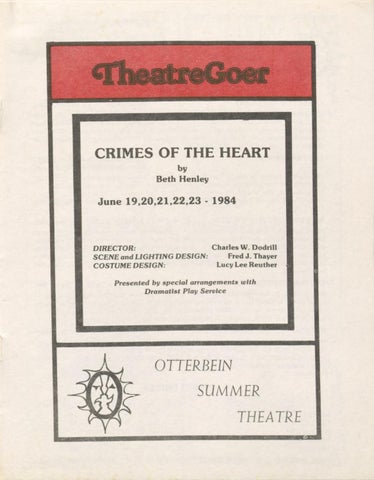 CRIMES OF THE HEART June 19,20,21,22,23 Tubs. - Sat. This new play by Beth Henley was the winner of the Pulitzer Prize and the New York Drama Critics Circle Award. It is a warm hearted, humorous examination of the lives of three young Mississippi sisters who are betrayed by their passions. “It has heart, wit and a surprisingly zany passion that must carry all before it... It would certainly be a crime for anyone interested in the theatre not to see this play.” - Clive Barnes, N.Y. Post THEFANTASTICKS

June 27,28,29,30, July 1,5,6,7 Wed.-Sun. Matinee; Thurs. - Sat. This cheerful musical fantasy by Tom Jones and Harvey Schmidt is about young love, parents, the world and human nature. A wonderful combination of beauty, originality, spirit and wise but tender wit. The beautiful scores include “Try to Remember,” “Never Say No,” “Plant a Radish,” and “Soon It’s Gonna Rain.” (NOTE: special matinee performance on Sunday, July 1, at 2:30 p.m.). WHOSE LIFE IS IT ANYWAY? July 10,11,12,13,14 Tues. - Sat. Brian Clark has written a brilliant battle of wits in this extraordinary play about a man’s search for personal dignity. Ken Harrison (played by guest professional DENNIS ROMER) is paralyz­ ed in a car accident and kept alive by hospital support systems. Harrison decides that he does not want to live only to exist as a medical achievement. His physician is determined to preserve Harrison’s life regardless of its quality. WHOSE LIFE is a sensitive, touching and timely even­ ing of theatre. THE DINING ROOM July 17,18,19,20,21 Tues. - Sat. A.R. Gurney, Jr. has crafted a richly humorous look at the now neglected room that was once a vital center of family life. A series of interrelated scenes that are funny, touching and rueful combine for an entertaining portrait of American life. THE DINING ROOM, directed by guest artist DENNIS ROMER, promises to be a delightful evening of humor and abundant humanity. WITNESS FOR THE PROSECUTION July 24,25,26,27,28 Tues. - Sat. Only Agatha Christie could have written this suspenseful thriller with its uncanny triple flip end­ ing. Guest artist ED VAUGHAN will be featured as Sir Wilford Roberts in an evening of suspense sprinkled with comedy. Make your plans early as last summer’s mystery played to 99% audience capacity. If you love a mystery, don’t miss ‘Witness For the Prosecution. ”.

Try the pizza that our customers say is the best in Westerville and judge for yourself.

We’re never satisfied until you are

(Scenic Shop Foreman) is a senior B.F.A. Design Technical major. He has been the master carpenter, costume master and property master for such productions as The Man Who Came To Dinner, Irene! and Otterbein Summer Theatre respectively. Michael recently appeared in A Midsummer Nights Dream as Bottom and was the designer for Heidi and Same Time, Next Year. He was also the 1982 and 1983 recipient of the D. Martyn Bookwalter Technical Theatre Award. This summer Mr. Blankenship will serve as scenic designer for The Dining Room.

David Caldwell (Properties Master) is a junior B.F.A. in performance. David has been in­ volved in Workshop Theatre and was the Deputy in The Man Who Came To Dinner, a chorus member of Irene! and Mordcha, the Innkeeper in Fiddler On The Roof. Outside of Otterbein he took part in The Slice of Life Theatre in Jesus Christ Superstar. Linda Cole

(Acting Apprentice) junior B.F.A. in performance. She recently appeared as Fraulein Rottenmeier in Heidi and as a chorus member in Fiddler On The Roof. She has also been involved in the Workshop Theatre program.

(Acting Apprentice) is a sophomore B.F.A. performance major. John recently portrayed the Rabbi in Fiddler On The Roof and also appeared in the fall workshop production of The Line.

(Acting Apprentice) is a junior B.F.A. performance major. Nancy most recently appeared as a Fairy in the winter production of A Midsummer Nights Dream.

(Property Mistress) is a junior B.F.A. Design-Technical major. Karen was cochairman for the lighting of Irene! and Fiddler On The Roof. Most recently Karen served as Properties Mistress for Same Time, Next Year. Last year Karen was technical apprentice for the Otterbein Summer Theatre. (Acting Company) is a sophomore B.F.A. Musical Theatre major. Last year Tim portrayed Lysander in A Midsummer Nights Dream, the Aim Uncle in Heidi and Perchik

in Fiddler On The Roof.

SERVICE ON ALL MAKES

Searching for Something Better

THE SETTING The setting of the entire play is the kitchen in the Magrath sistersâ&amp;#x20AC;&amp;#x2122; house in Hazelhurst, Mississippi.

THE TIME In the fall; five years after Hurricane Camille.

There will be two ten-minute intermissions.

TIFFANY’S is proud to introduce its NEW MENU featuring

DIRECTORS and DESIGNERS Ed Vaughan, Otterbein Theatre faculty member, will direct Whose Life Is It Anyway? and play the part of Sir Wilfrid Robarts in Agatha Christie’s Witness For The Prosecution, while ser­ ving as Summer Theatre Managing Director. Fred J. Thayer, Otterbein Scenic Designer, will serve as Technical Director for the summer and will design the sets for Crimes Of The Heart, Whose Life Is It Anyway? and Witness For The Prosecution. Assisting Mr. Thayer in the technical areas will be senior B.F.A. student Michael Blankenship who will also design the set for The Dining Room. Lucy Lee Reuther, Otterbein Costume Designer, will design the costumes for Crimes Of The Heart,Whose Life Is It Anyway? and Witness For The Prosecution. Michael Slane, recent Otterbein graduate, will serve as Costume Shop Foreman while designing the costumes for The Fantasticks and The Dining Room. Mr. Slane will also design the set and costumes for our children’s production of Hansel and Gretel. Dr. Charles W. Dodrill, Chairman of the Otterbein College Department of Theatre and dance, will direct the Summer Theatre’s opening production of Beth Henley’s comedy Crimes Of The Heart. Suzanne Kiesby-Blackburn, is an Assistant Professor of Theatre at Ohio State University. She most recently directed Chekou at Yalta for O.S.U. This summer Suzanne will direct and choreograph The Fantasticks.. Dennis Romer, guest professional artist, will play the lead in Whole Life Is It Anyway? and will direct The Dining Room. Mr. Romer is a 1971 graduate of Otterbein College. Fontaine Follansbee, is a 1981 graduate of Otterbein. She is currently working on her MM degree in Voice Performance at the University of Michigan. She will play the role of Luisa in The Fantasticks. Geoffrey Nelson, who last summer directed God&#39;s Favorite, returns this season to direct Agatha Christie’s Witness For The Prosecution. David A. Hammond, who last summer functioned as Designer/Technical Director, returns this season to design the set for The Fantasticks. Craig Johnson, of the Department of Music, will serve as Musical Director for The Fan­ tasticks. During the regular school year, Mr. Johnson is the director of Otterbein’s show choir Opus Zero.

MAILING LIST —If you would like to be on our mailing list and receive announcements of college cultural activities, please fill out a card at the refreshment stand. REFRESHMENTS—The refreshment stand is located in the lobby for your convenience. We would appreciate your cooperation in not bringing cups into the auditorium. Thank you. RESTROOMS and TELEPHONE —The restrooms and telephone are located upstairs behind the main entrance of the Campus Center. SPECIAL CHILDREN’S THEATRE: HANSEL and GRETEL Moses Goldberg has written a superb special treatment of this familiar folk tale. This audience participation version of HANSEL AND GRETEL encourages the audience to share the action and plot in a direct, physical way. The play lasts about one hour and is geared to young people five years of age and above. Performance dates are: Friday-Saturday, June 29, 30, and ThursdayFriday-Saturday, July 5, 6, and 7. Show time is 1:30 p.m. General admission is $2.00; groups over 25, $1.50.

Program Crimes of the Heart 1984