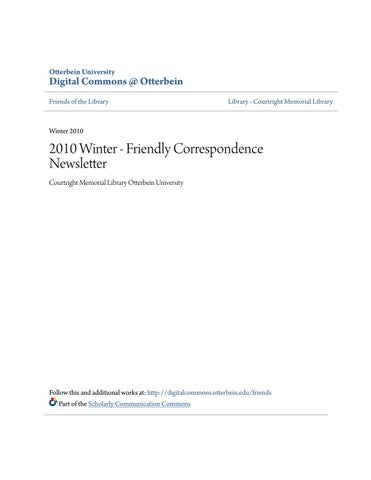 Follow this and additional works at: http://digitalcommons.otterbein.edu/friends Part of the Scholarly Communication Commons

Time in a Bottle Friday March

The 2009 Freshman Musical Theatre Majors under the direction of Dennis Davenport and Stella Hiatt Kane, will join the Freshman Acting Majors, under the direction of Ed Vaughan, to perform a retrospective of popular music and show tunes from the 1960â&#x20AC;&#x2122;s and 1970â&#x20AC;&#x2122;s as a fundraiser for the Friends of the Otterbein College Courtright Memorial Library

Pictures from “A Reader’s Nightmare” By Jim Bailey January 18, 2008

“A Reader's Nightmare" is a comedy by James Bailey, Professor Emeritus of English. The reader, played by Bailey, is haunted by

One of the pieces of art displayed

Don’t get caught in the cold! Visit the Courtright Memorial Library and find a book to warm the spirit

A Farewell to Friends Lost James A MacKenzie James A. MacKenzie, age 62 of Westerville passed away Friday December 26, 2008. James was a 1964 graduate of Westerville High School and graduated from Otterbein College. He was a member of the Church of The Master, United Methodist., served as a Captain in the U.S. Air Force in Vietnam. Preceded in death by father, Arthur. Survived by his loving wife of 35 years, PeiHsiu; children, Michelle (Shawn) and Michael MacKenzie; grandson Zaine Foster; Mother, Alberta Messmer; sisters, Carol Kruger, Barbara Campbell and Marilyn MacKenzie; numerous other family members. Memorial Service was held at 11 a.m. Tuesday, December 30, 2008 at the Church of The Master, U.M. 24 N. Grove St., Westerville with reception immediately following service. Family also received friends one hour prior to service. Friends may if they wish, contribute in his memory to Central Ohio Parkinson Society. P.O. Box 16126, Columbus, OH 43216. Arrangements handled by the Hill Funeral Home, Westerville (Columbus Dispatch, December 28, 2008: B9)

Mary Lydenberg Davis Mary Lydenberg Davis, aged 93, died Saturday, November 22, 2008, in Westerville, Ohio, from cancer. She was predeceased by her husband of 68 years, William W. Davis, who died November 1 of this year. Mary is survived by four children and their spouses, Donald and Jean Davis of Bethlehem, Pennsylvania, William Davis II and Ellen Gagne of Bethesda, Maryland, Richard Davis and Rita McCleary of Hamden, Connecticut, and Debby and Andrew Blackley of Chardon, Ohio. In her loving family also are seven grandchildren and one spouse, Joelle Davis Michaels and her husband, Kenneth Michaels, Jason Davis, Matthew Davis, Molly Blackley, Katherine Blackley, Rebecca Blackley, and Andrew Blackley IV. The most recent addition to her family is one great-grandson, Kenneth William Michaels. Mary was born August 28, 1915 in Scarsdale, NY. Her parents were Harry M. Lydenberg and Madeleine Day Lydenberg. After graduating from Scarsdale High School in 1932, she attended Mt. Holyoke College, where she received a B.A. in 1936. In 1938 she received a certificate from the New York School of Social Work. She worked in the area of child welfare in Baltimore, Maryland for several years, where she met Bill. Soon after their wedding in 1940 they were separated by war. When Bill was sent to serve in Australia and New Guinea, Mary continued social work in Louisville, Kentucky. After the war they lived in Kentucky and West Virginia before moving to Westerville, Ohio in 1952. Westerville was her home for 56 years. In addition to raising a large family, Mary was active in numerous volunteer activities and local organizations. She served as President in the Westerville chapter of the League of Women Voters, she was a co-founder of Project Aware in 1965, she worked with Life-Care Alliance, and she has been an active member of the Church of the Messiah United Methodist in many capacities, including the Teammates Sunday school class. She received the Courtright Community Service Award in 1965, and also received an Otterbein Honorary Alumnus Award in 2003. She loved to travel, and after graduation from Mt. Holyoke in 1936 she traveled to Germany and the Soviet Union. After Bill's retirement they traveled extensively in the U. S. and abroad. Many in Westerville have been touched by her consideration and good cheer, and she will be missed greatly in this community. In a short biography Mary wrote in 1982 for her 50th high school reunion at Scarsdale, she concluded: "it's a great life and we've been very blessed. You have to roll with the punches. There's always a challenge and a green field appearing." Friends joined her family at a Celebration of Her Life, at 11 a.m. November 29, 2008 at The Church of the Messiah, 51 N. State St., Westerville. Friends may contribute in her memory to their charity of choice. Arrangements by HILL FUNERAL HOME, Westerville (Columbus Dispatch, November 25, 2008: B4)

William Wiant Davis, M.D., age 97, of Westerville, OH, died Saturday, November 1, 2008 after a short illness. He was a retired physician since 1976. He specialized in pediatrics, industrial medicine, public health, and military medicine. Williams is survived by beloved wife, Mary Lydenberg of 68 wonderful years; remarkable sons and daughters-in-law, Donald M. and Jean Grosz Davis, William W. II and Ellen Gagne, Richard H. and Rita McCleary; dedicated daughter and son-in-law, Deborah V. and Andrew K. Blackley; grandchildren, Joelle S., Jason R., Mathew H., Molly L., Katherine D., Rebecca D., and Andrew K. IV; great-grandson, Kenneth W Michaels. He was preceded in death by parents Isaac D. and Ethel Wiant Davis and sister Barbara W. Cherrill, all of Parkersburg, WV. His premedical education was at Marietta College and the University of Michigan, medical degree from Vanderbilt Medical School. Internships and residency at Baltimore City Hospitals and the John Hopkins Hospital. He was a Pediatrician at Beckley Hospital W.Va. prior to Army service and entered Army service on December 5, 1940, in a early overseas deployment. He served in World War II in SWPA with the 10th Evacuation Hospital, which received the Distinguished Unit Citation. His active duty terminated January 1946. He had an active medical practice in Oak Hill, W.V. and Parkersburg, 1946-1952; and a residency Ohio State Medical School 1952-53 in Occupational Medicine. He practiced occupational medical at O.S.U. and at the North American Aviation Company 1953-1971, where he was medical director. He was also area medical director for Ohio Bell Telephone. He was active in the U.S. Army Reserve 1952-1969 and as Brig. General Commanding officer, from 1964-69 for the 2291st General Hospital, He was awarded Legion of Merit 1969 upon retirement. William was assistant professor of Preventive Medicine and courtesy staff at O.S.U. Hospital. He was also the Past president of the Franklin County Heart Association, a member of the Columbus Academy of Medicine, the American Board of Pediatrics, the Ohio State Medical Association, the American Medical Association, a fellow of the American Occupational Medical Association, a member of the Candby Robinson Society (medical), Otterbein "O" Club, and the Westerville Sertoma Club. He was the Westerville Fund President. Member Alpha Tau Omega (U. of Michigan) and Alpha Kappa (medical) fraternities; the American Legion Young Budd Post 171 and V.F.W. Post 7883 Westerville. William was a longtime member of the Church of the Messiah, United Methodist. Westerville, and devoted member of the Teammates Sunday School class of that church. Longtime interest in vintage automobiles. Member of the Auburn, Cord, Dusenberg Club and the Mercedes Benz Club. Friends called Thursday, November 6, 2008 at the HILL FUNERAL HOME, 220 S. State St., Westerville. Funeral Service was Friday, November 7, 2008 at Church of the Messiah, U.M. 51 N. State St., Westerville. Graveside Service was Saturday, November 8, 2008 at Mount Olivet Cemetery, Parkersburg, W.V. In lieu of flowers, friends may contribute in his memory the Acclaim Hospice, 2800 Corporate Exchange Dr., Columbus, OH 43231 (Columbus Dispatch, November 4, 2008: B4)

The Importance of Belonging, Relationships, and Learning with Each Other

FOR OFFICE USE ONLY

A benefit to being a Friend is borrowing privileges

 Yes, I would like to have borrowing privileges.

Drivers License Number (required) By signing (below) I agree that I will abide by the loan policies of the Courtright Memorial Library. I will be responsible for all items I check out and their replacement costs should they become lost, stolen, or damaged. I understand that the Courtright Memorial Library reserves the right to take collection actions if my account is over 60 days past-due.

Please note that your membership expires on the date shown on your mailing label. To renew, fill out the enclosed form and mail it to Courtright Memorial Library. Please don’t forget to inform us of any address changes. Thank you.