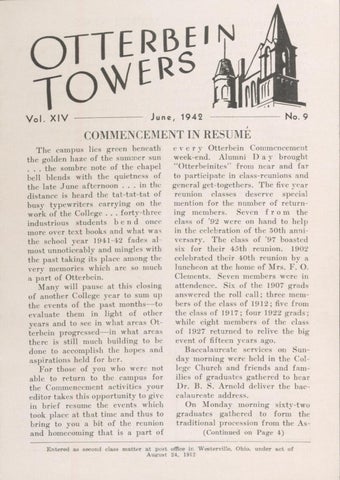 COMMElNCEMENT IN RESUME The campus lies green beneath the golden haze of the summer sun . . . the sombre note of the chapel bell blends with the quietness of the late June afternoon ... in the distance is heard the tat-tat-tat of busy typewriters carrying on the work of the College . . . forty-three industrious students bend once more over text books and what was the school year 1941-42 fades al­ most unnoticeably and mingles with the past taking its place among the very memories which are so much a part of Otterbein.

Many will pause at this closing of another College year to sum up the events of the past months—to evaluate them in light of other vears and to see in what areas Ot­ terbein progressed—in what areas there is still much building to be done to accomplish the ho})es and aspirations held for her. For those of you who were not able to return to the campus for the C’oinrnencement activities your editor takes this oj)portunity to give in brief resume the events wliich took place at that time and thus to bring to you a bit of the reunion and homecoming that is a part of

ever y Otterbein Commencement week-end. Alumni D a y brought “Otterbeinites” from near and far to participate in class-reunions and general get-togethers. The five year reunion classes deserve special mention for the number of return­ ing members. Seven from the class of ’92 were on liand to help in the celebration of the 50th anni­ versary. The class of ’97 boasted six for their 45th reunion. 1902 celebrated their 40th reunion by a luncheon at the home of Mrs. F. O. Clements, Seven members were in attendence. Six of the 1907 grads answered the roll call; three mem­ bers of the class of 1912; five from the class of 1917; four 1922 grads; while eight members of the class of 1927 returned to relive the big event of fifteen years ago.

Baccalaureate services on Sun­ day morning were held in the Col­ lege Churcli and friends and fam­ ilies of graduates gathered to hear Dr, B, S. Arnold deliver the bac­ calaureate address. On Monday morning sixty-two graduates gather(‘d to form the traditional {)roeession from the As(Continued on Page 4)

Entered as second class matter at post office in Westerville, Ohio, under act of Auffust 24. 1912

Items from the Editor

Only four this time—brief and to the point. First, don’t forget we are relying on you to hel}) di­ rect students to Otterbein’s halls for this fall. Don’t fail us ! Rela­ tive to that keep in mind as an­ nounced previously that Otterbein is 11 o w establishing a complete program of elementary education.

• ’12 Among the first members of the newest group of alumni to accept positions are Charles Bridwell who is employed as foreman in the Ordnance plant at Joliet, Illinois; and Arthur Secrest M&#39;ho has accepted a position as chemist in the government ordnance plant at Wahoo, Nebraska.

Two sentences of farewell from your editor, who, as he writes this, complet(*s his last issue of the “Towers.” First, an expression of my appreciation to Miss Janet Scanland, my secretary for the past two years, who has done so much of the work pertaining to our “Tow(*rs” and the alumni jirogram in general. For you as well as my­ self, I say thanks. Finally to you all, my good wishes and a last hand shake and a warm word of thanks for your fine cooperation in our endeavor to make Otterhein’s alumni program a bigger and better thing. I hesjieak for those who will continue with the work the saim* sjihmdid cooperation.

•’.S7 De nton Elliott is now located at Joliet, Illinois, where he is emj)loyed as foreman in the Ord­ nance plant. • ’.S2 Carl C. B^ers, who has been principal of Gallia Academy High School in Gallipolis since 19J6, has been named superin­ tendent of the Parma, Ohio, schools. Mr. Byers has a master’s degree from Ohio University and is study­ ing for a doctor of philosophy de­ gree from the Ohio State Uni­ versity. • ’28 Mrs. Earl R. Hoover (Alice I.. Propst) is the new president of the Women’s Council for Hiram College. • ’27 Evidence of the rapidity with which world affairs are mov­ ing at the present time is the fact that the last issue of the “Towers’&#39; is already out-of-date, and Perry I.aukhuff, who at the time of that issue was reported to have been assigned to an (inbassy })ost at Ijsbon, is back in the United States. He arrived on the Swedish-American liner Drottningholm on June 1 under a safe conduct exchange arrangement with the Axis. • (“x-’2.&#39;’) J o h n Shank, country circulation manager for the Dayton Daily News since March 1929, has been named circulation man-

ager for the newspaper. Mr. Shank has been employed by the News since October, 1925. At that time he was engaged as a city district manager and later was named to the position from which he has just been promoted.

• ’20 At the inauguration of Ed­ win Edgar Voigt as President of Simpson College, Indianola, Iowa, Otterbein College was rejjresented by Dr. James E. Oppelt who is a member of the faculty of that in­ stitution. •ex-’13 We regret to announce the death of India Katherine Shep­ herd, the infant daughter of Mr. and Mrs. Frank Shepherd of Co­ lumbus, Ohio. • ’01 Included in the 1912-13 edi­

tion of “Who’s Who In California” is the name of Dr. Alfred Henry Weitkamp, physician and surgeon of Los Angeles. • ’90 Dr. E. V. Wilcox of Chevy Chase, Maryland, was recently elected president of the Shakes­ peare Society of Washington.

With the Army: The alumni office continues to re­ ceive letters and cards from the four corners of the globe as Otter­ bein boys become members of the army, the navy and the marines in the united effort of the country. Bill Johns, ’12, is at Sheppard Field, Wichita Falls, Texas. New draftees from Westerville include Henry Karg, ex-’42; Ht nry Furniss, ’34; A1 Detrick, ex-’32, and Austin Sage. ex-’32. (C&lt;)ntituie(l on Page 4, Column 2)

(Continued from Page 1) sociation Building to the College Chiireh. Of this niiinber forty-three reeeived the degree of bachelor of arts, twelve received the degree of bachelor of science, six received the degree of bachelor of music‘educa­ tion, and one the degree of bache­ lor of fine arts. In addition to the under-graduates receiving degrees, honorary degrees were conferred on the Reverend Mr. J. Stuart Innerst, pastor of the F a i r v i e w United Brethren Church of Dayton; Mr. Frank H. Reinaley, As­ sistant Superintendent of the Al­ legheny County Schools, Pitts­ burgh, Pa.; Mr. Elmer N. Funkhouser, Vice-President, The Funkhouser Company, Hagerstown, Md.; and Mr. Charles Franklin Kettering, Vice - President, The General Motors Corporation, De­ troit, Michigan. Dr. Kettering’s address, “The Value of Education in This Changing World,” was challenging and profitable to the members of the graduating class as well as to the friends and families who gathered for the Commence­ ment exercises. The singing of the “Love Song” and playing of “Taps” brought Commencement ac­ tivities and the 1942 school year officially to a close.

(Continued from Page 3) Carl Alsberg, &#39;41, has been a corporal for several months now, but this is the first opportunity that the alumni office has had to an­ nounce the raise in rank.

The science department of the Colleges loses a valuable instruc­ tor as Prof. Charles W. Botts, in­ structor of bacteriology, who has been commissioned first lieutenant in the Sanitary Corps of the army, leaves to report for duty at the Bil­ lings General Hospital, Indian­ apolis, Indiana. While Lois Arnold Wagner, ’42. was receiving the A.B. degree in Otterbein’s Commencement e x e r cises, husband Marvin, ex-’44, was busy learning the work of the United States Coast Guards. He is stationed at Harbor Beach, Michigan. Private Harold Joseph Anness, ex-’44, better known to the Otter­ bein campus as “Hody Joe,” is stationed at Fort Knox, Kentucky. Joe Papp, ex-’48, feels right at home in the army with the title “Student.” He is stationed in New Orleans. Fred Nicolle’s last letter came on im})ressive W a r Department letter head — maybe it’s because he’s now a Corporal at Camp Croft, South Carolina. A new army camp was added to the Otterbein list when William Spitler, ’.34, was s(‘nt to Fort Logan, Colorado.

Pvt. Harold McBride is no longer “deep in the heart of Texas,” but has transferred his af­ fections to the “Georgia peaches,” Ft. Benning, Georgia.