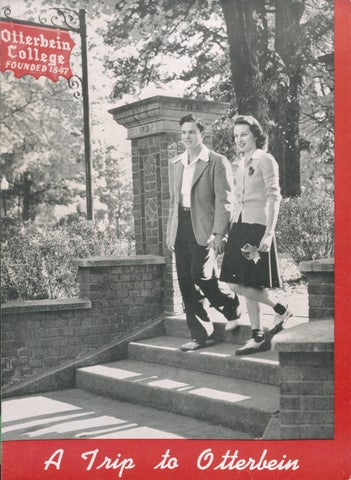 ^^Her Stately Towers Speak naught hut power For our dear

Let us stroll across her

campus, visit her buildings, and see her students as they work

and play, and love and dream.

Let us try to catch something of

her Spirit as symbolized by The Towers—her stately towers— ever pointing skyward and beckoning all in their shadows to have the upward and forward look. That is the Spirit

which for ninety-five years has been an inspiration and challenge to thousands of young people like yourself.

Published quarterly by the Alumni Council in the interest of alumni and friends. Entered as second class matter at the post office in Westerville, Ohio, under the Act of August 24, 1912.

A CAMPUS BEAUTIFUL ENTER THE CAMPUS note the stately

elms, oaks, and maples which shade the walks and approaches to Old Main.

characteristic of the whole campus, making it one of natural beauty.

GO TO CHAPEL daily at Otterbein.

The twenty minutes which we spend here daily

are among the most helpful and stimulating of our college experience. Many a new resolve is made as we come under the influence of great and good men.

The annual Religion in Tife Week brings to the campus an

outstanding Christian leader to share with the students his richest experiences.

Otterbein, as a church-related college, is dedicated to the principle that religion is a part of the equipment of the well-educated man.

church plays its part in helping students to develop a Christian philosophy, with respect for personality, and love for truth. church is also the college chaplain.

The minister of the

Here is the storehouse for Otterbein’s 34,000 books and other thousands of bound magazines. One hundred sixty current periodicals, representing every interest of the stu­ dents, come regularly to the library. You will spend many hours here in study, research, or just reading for plain enjoyment.

Perhaps you like to write, or you are interested in Journalism! If so, you will find many outlets for expression.

provide a broad foundation for journalistic work. The Tan and Cardinal, our bi-weekly newspaper; the Sibyl, our yearbook; and the Quiz and Quill, our literary magazine, are student publications. I&#39;he News Bureau affords opportunities for reporting for large dailies and periodicals.

THIS IS AN AGE OF SCIENCE cFadden hall,

A major is offered for those who desire to teach that subject in high school.

Eighteen Courses are ofiered in art, leading to the degree of Bachelor of Fine Arts (B.F.A.). Thev include Appreciation; History; Commercial, Cos­ tume, and Stage Design; Drawing; Painting; In­ terior Decorating; Handicrafts; and Sculpture. At the left you observe the most modern technique in teach­ ing speech. By this means you hear yourself as others hear you. Courses are offered in Public Speaking, Parliamentary Speech, Interpretative Reading, Phonetics, and Debating. Debate teams engage in intercollegiate contests.

you have production “Yes each year. The acting, make-up, Below

a scene from the recent Cap and Dagger and No.” Plays of many types are staged class in play production studies the art of and stagecraft.

Mus., and B. Mus. Ed. degrees. Graduates are qualified to teach both

music in either grades or high school.

Otterbein is one of the one hundred thirty-six schools in the United States approved by the National Association of Schools of Music.

various ensembles allies for particiâ&amp;#x20AC;˘endition of the hsic. liven though jsic major, you are hese organizations.

A SPORT FOR EVERYONE F COURSI: YOU LIKF TO PLAY!

A complete program of

intercollegiate and intramural sports is carried on under competent coaches.

A major in physical education is

offered for those who desire to teach.

Below: These pictures suggest the preventive and curative aspects of the college health pro­ gram. All students are carefully watched by the college physician for symptoms of disease. For those who become ill, a fully equipped twelve-

bed Health Center is provided with a resident, trained nurse always in charge.

OUR HOMES AWAY FROM HOME RALLY, you would ^ like to see our student homes.

Girls live in one of

the two dormitories pictured on this page or in the Co-op House, where they do their own cooking, and thus, reduce expenses.

Hall, the Clements House, or in one of the fixe fraternity houses.

FRATERNITIES SORORITIES There are five fraterÂ­ nity houses adjacent to the campus. Each of the six sororities has a club room in Cochran Hall. These groups leave nothÂ­ ing to be desired in social life.

Right: Going out for a Formal

There are many opportu­ nities for on- or off-campus work, for those who apply early,

one of the campus work­ shops, is located in McFadden Hall, pictured at the left.

HERE ARE THE FACTS ABOUT OTTERBEIN ACCREDITATION

Catholic and Jewish faiths, are represented in the student body. EXPENSES

Expenses are held to the minimum in keeping with the educational efficiency and high stand­ ing of the college. The catalog carries an itemized list of all expenses. Students with high scholastic averages may apply for scholar­ ships. Self-help is available for those with limited means.

The Collecje is affiliated with the Church of the United Brethren in Christ; however, it is not narrowly denominational. Each year the major Protestant denominations, as well as the ■Alumni Gymnasium

HOW TO ENTER OTTERBEIN

Applications should be sent to the college as soon as possible after the close of the first semester of the senior year. A Complete Catalog listing all courses and giving additional information will he sent on request to persons seriously considering the possibilities of entering Otterbein College. Inquiry concerning any phase of the work offered or any questions about a particular educational problem will receive prompt atten­ tion if addressed to: Dr. Wade S. Miller Director of Public Relations

meet OUR PRESIDENT J. RUSKIN HOWE, B.D, Ph. D., D. D. ou HAVE JOURNEYED WITH US about the campus and through the

buildings at Otterbein. Much of the visible tangible Otterbein has been represented to you in the pages you have turned. But it is our hope that you may also have caught some suggestion of that intangible but contagious “Otterbein spirit” which unites faculty and students in a glad comradeship of learning and of life. d&#39;he abiding values of college days lie as truly in these “priceless impon­ derables” as in the wisdom gleaned from teachers and from books. These deeper things which for almost a century hav^e been Otterbein’s traditions and ideals cannot be pictured here. To know them you must live and movQ and have your being for a season among the friendships, the adven­ tures and the discipline of mind and spirit which have given Otterbein her greatness. We invite you to do just that. Visit us at Otterbein! Better still, come and spend among us the four happiest and finest years of all your life. J. Ruskin Howe, President