f skiers get grumpy trying to book the popular overnight cabins in Gatineau Park, there’s an alternative. At the Papineau-Labelle Wildlife Reserve in Quebec, two hours from Ottawa on Highway 321 north of Papineau, they can reserve overnight huts just weeks in advance instead of months ahead. This is where I enjoyed my very first overnight ski weekend with friends.

At the visitor centre, we strapped on our packs and headed outside, but quickly realized we were newbies skiing with extra weight. The serpentine curves on our selected trail were beyond our abilities. Luckily, PapineauLabelle (an immense 1,628 square kilometres) has options for all on its 100 kilometres of marked but ungroomed trails. The easiest and straightest of them follows a summer road for 10 kilometres. The Ernestine and Le Petit Train (which follows an old rail line, hence the name) are harder forest trails, and La Ouest is for seasoned skiers. Ski times to our cabins varied from 2½ to four hours, reflecting our skill mix – total beginners to quite experienced. Don’t be fooled: our ski-along-a-road is still tough for a beginner with a pack, even though it’s is straight and groomed. The long ski in gave us time to establish the swish-swish rhythm of cross-country skiing. We also had lots of time to think about how darn heavy our packs were, and mentally list all the items we should have left at home. Park rangers will ski-doo up to six bags into the cabins for $105, but we said no. We had packed as little as we could to strike a balance between an easy load and enough clothes and food to avoid cold and hunger. As winter camping goes, the rustic, wellequipped cabins felt relatively luxurious, with couches and beds, so we needed only sleeping 06 I ottawaoutdoors

bags. Beds are rented per person, so if you are in a small group you may find yourself making friends with new cabin mates. A pre-drilled ice hole in the lake was our source of water, boiled in large kettles on propane stoves. There was firewood already cut and split for a glorious glow from the wood stove. A few folk found beach chairs for lounging on the lake ice, enjoying hot chocolate and the sight of quietly falling snowflakes. Our crew opted for a true feast instead of regular camping fare. So it was with bellies full of venison chili, Moroccan stew, cornbread and a few bladders of wine that we headed out for a midnight ski over the solidly frozen Lake Ernest. The moon was almost full, the snow flat and powdery, the night clear and far from light pollution. So we saw all those stars twinkling down as we skied the full length of the lake. Back at the cabin, other adventurous spirits had built a quinzee out front. We hung out in it for a bit, but later snuggled up in the beds inside the cabins. The only downside of skiing in to the cabins is you have to ski out again. Luckily our packs were much lighter, spirits were high, and we cut a full hour off our time coming in. I stayed on my feet the whole time until a tumble just 10 metres from the visitor centre as we returned. Big discovery: it’s hard to get back up on skis with a 14-kilogram pack on your back. The park ranger just smiled. This kind of weekend would be incomplete without at least one good wipeout. 

THINK AHEAD Practise skiing with a pack before you try this kind of adventure. As you transfer weight from foot to foot, don’t transfer too far or your pack will slide to the side and take your body with it – into a pile of snow. Wax skis carefully. Carrying a pack compresses the skis more, leaving a shorter wax “pocket,” the area under the binding where you apply grip wax. If it’s too long with weight on your back, your skis won’t glide well and will slow you down. If you rent skis, get a longer pair than normal to account for the added weight of your pack. Hut rentals are $28.75 per person plus tax. Phone 1-800-665-6527 to book one. 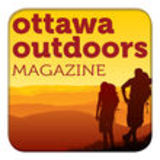