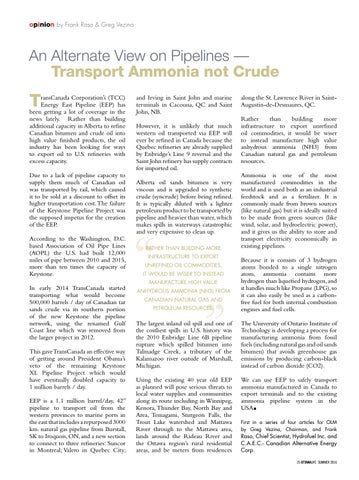 An Alternate View on Pipelines — Transport Ammonia not Crude

ransCanada Corporation’s (TCC) Energy East Pipeline (EEP) has been getting a lot of coverage in the news lately. Rather than building additional capacity in Alberta to refine Canadian bitumen and crude oil into high value finished products, the oil industry has been looking for ways to export oil to U.S. refineries with excess capacity. Due to a lack of pipeline capacity to supply them much of Canadian oil was transported by rail, which caused it to be sold at a discount to offset its higher transportation cost. The failure of the Keystone Pipeline Project was the supposed impetus for the creation of the EEP. According to the Washington, D.C. based Association of Oil Pipe Lines (AOPL) the U.S. had built 12,000 miles of pipe between 2010 and 2015, more than ten times the capacity of Keystone. In early 2014 TransCanada started transporting what would become 500,000 barrels / day of Canadian tar sands crude via its southern portion of the new Keystone the pipeline network, using the renamed Gulf Coast line which was removed from the larger project in 2012. This gave TransCanada an effective way of getting around President Obama’s veto of the remaining Keystone XL Pipeline Project which would have eventually doubled capacity to 1 million barrels / day. EEP is a 1.1 million barrel/day, 42” pipeline to transport oil from the western provinces to marine ports in the east that includes a repurposed 3000 km. natural gas pipeline from Burstall, SK to Iroquois, ON, and a new section to connect to three refineries: Suncor in Montreal; Valero in Quebec City;

and Irving in Saint John and marine terminals in Cacouna, QC and Saint John, NB. However, it is unlikely that much western oil transported via EEP will ever be refined in Canada because the Quebec refineries are already supplied by Enbridge’s Line 9 reversal and the Saint John refinery has supply contracts for imported oil. Alberta oil sands bitumen is very viscous and is upgraded to synthetic crude (syncrude) before being refined. It is typically diluted with a lighter petroleum product to be transported by pipeline and heavier than water, which makes spills in waterways catastrophic and very expensive to clean up. RATHER THAN BUILDING MORE INFRASTRUCTURE TO EXPORT

along the St. Lawrence River in SaintAugustin-de-Desmaures, QC. Rather than building more infrastructure to export unrefined oil commodities, it would be wiser to instead manufacture high value anhydrous ammonia (NH3) from Canadian natural gas and petroleum resources. Ammonia is one of the most manufactured commodities in the world and is used both as an industrial feedstock and as a fertilizer. It is commonly made from brown sources (like natural gas) but it is ideally suited to be made from green sources (like wind, solar, and hydroelectric power), and it gives us the ability to store and transport electricity economically in existing pipelines.

Because it is consists of 3 hydrogen atoms bonded to a single nitrogen atom, ammonia contains more hydrogen than liquefied hydrogen, and it handles much like Propane (LPG), so it can also easily be used as a carbonfree fuel for both internal combustion engines and fuel cells.

The largest inland oil spill and one of the costliest spills in U.S. history was the 2010 Enbridge Line 6B pipeline rupture which spilled bitumen into Talmadge Creek, a tributary of the Kalamazoo river outside of Marshall, Michigan.

The University of Ontario Institute of Technology is developing a process for manufacturing ammonia from fossil fuels (including natural gas and oil sands bitumen) that avoids greenhouse gas emissions by producing carbon-black instead of carbon dioxide (CO2).

Using the existing 40 year old EEP as planned will pose serious threats to local water supplies and communities along its route including in Winnipeg, Kenora, Thunder Bay, North Bay and Area, Temagami, Sturgeon Falls, the Trout Lake watershed and Mattawa River through to the Mattawa area, lands around the Rideau River and the Ottawa region’s rural residential areas, and be meters from residences

UNREFINED OIL COMMODITIES, IT WOULD BE WISER TO INSTEAD MANUFACTURE HIGH VALUE ANHYDROUS AMMONIA (NH3) FROM CANADIAN NATURAL GAS AND

First in a series of four articles for OLM by Greg Vezina, Chairman, and Frank 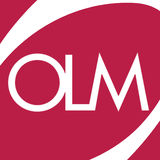