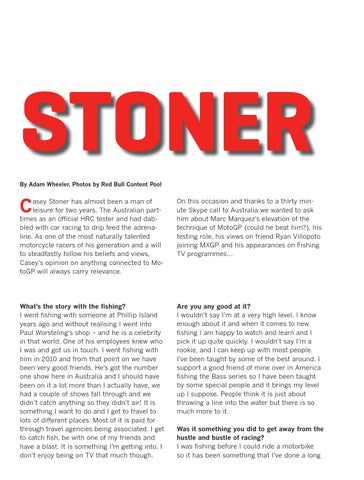 asey Stoner has almost been a man of leisure for two years. The Australian parttimes as an official HRC tester and had dabbled with car racing to drip feed the adrenaline. As one of the most naturally talented motorcycle racers of his generation and a will to steadfastly follow his beliefs and views, Casey’s opinion on anything connected to MotoGP will always carry relevance.

On this occasion and thanks to a thirty minute Skype call to Australia we wanted to ask him about Marc Marquez’s elevation of the technique of MotoGP (could he beat him?), his testing role, his views on friend Ryan Villopoto joining MXGP and his appearances on Fishing TV programmes…

What’s the story with the fishing? I went fishing with someone at Phillip Island years ago and without realising I went into Paul Worsteling’s shop – and he is a celebrity in that world. One of his employees knew who I was and got us in touch. I went fishing with him in 2010 and from that point on we have been very good friends. He’s got the number one show here in Australia and I should have been on it a lot more than I actually have, we had a couple of shows fall through and we didn’t catch anything so they didn’t air! It is something I want to do and I get to travel to lots of different places. Most of it is paid for through travel agencies being associated. I get to catch fish, be with one of my friends and have a blast. It is something I’m getting into. I don’t enjoy being on TV that much though.

Are you any good at it? I wouldn’t say I’m at a very high level. I know enough about it and when it comes to new fishing I am happy to watch and learn and I pick it up quite quickly. I wouldn’t say I’m a rookie, and I can keep up with most people. I’ve been taught by some of the best around. I support a good friend of mine over in America fishing the Bass series so I have been taught by some special people and it brings my level up I suppose. People think it is just about throwing a line into the water but there is so much more to it. Was it something you did to get away from the hustle and bustle of racing? I was fishing before I could ride a motorbike so it has been something that I’ve done a long 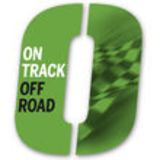