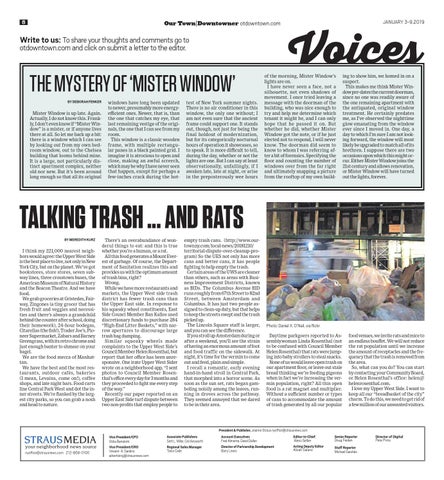 Write to us: To share your thoughts and comments go to otdowntown.com and click on submit a letter to the editor.

THE MYSTERY OF ‘MISTER WINDOW’ BY DEBORAH FENKER

Mister Window is up late. Again. Actually, I do not know this. Frankly, I don’t even know if “Mister Window” is a mister, or if anyone lives there at all. So let me back up a bit: there is a window which I can see by looking out from my own bedroom window, out to the Chelsea building that looms behind mine. It is a large, not particularly distinct apartment complex, neither old nor new. But it’s been around long enough so that all its original

windows have long been updated to newer, presumably more energyefficient ones. Newer, that is, than the one that catches my eye, that last remaining vestige of the originals, the one that I can see from my room. This window is a classic wooden frame, with multiple rectangular panes in a black painted grid. I imagine it is atrocious to open and close, making an awful screech, which may be why I have never seen that happen, except for perhaps a few-inches crack during the hot-

test of New York summer nights. There is no air conditioner in this window, the only one without; I am not even sure that the ancient frame could support one. It stands out, though, not just for being the final holdout of modernization, but for its categorically nocturnal hours of operation it showcases, so to speak. It is more difficult to tell, during the day, whether or not the lights are one. But I can say at least observationally, unfailingly, if I awaken late, late at night, or arise in the preposterously wee hours

of the morning, Mister Window’s lights are on. I have never seen a face, not a silhouette, not even shadows of movement. I once tried leaving a message with the doorman of the building, who was nice enough to try and help me determine which tenant it might be, and I can only hope that he passed it on. But whether he did, whether Mister Window got the note, or if he just elected not to respond, I will never know. The doorman did seem to know to whom I was referring after a bit of forensics. Specifying the ﬂoor and counting the number of windows over from the far right and ultimately snapping a picture from the rooftop of my own build-

ing to show him, we homed in on a suspect. This makes me think Mister Window pre-dates the current doorman, since no one was readily aware of the one remaining apartment with the antiquated, original window treatment. He certainly predates me, as I’ve observed the nighttime glow emanating from the window ever since I moved in. One day, a day to which I’m sure I am not looking forward, the window will most likely be upgraded to match all of its brethren. I suppose there are two occasions upon which this might occur. Either Mister Window joins the 21st century and allows renovation, or Mister Window will have turned out the lights, forever.

I think my 221,000 nearest neighbors would agree: the Upper West Side is the best place to live, not only in New York City, but on the planet. We’ve got bookstores, store stores, seven subway lines, three crosstown buses, the American Museum of Natural History and the Beacon Theatre. And we have food. We grab groceries at Gristedes, Fairway, Zingones (a tiny grocer that has fresh fruit and veggies and necessities and there’s always a grandchild behind the counter after school, doing their homework), 24-hour bodegas, Citarellas (the ﬁsh!), Trader Joe’s, Pioneer Supermarket, Zabars and Barney Greengrass, with its retro chrome and just enough banter to shmear on your bagel. We are the food mecca of Manhattan. We have the best and the most restaurants, outdoor cafés, bakeries (I mean, Levains, come on!), coffee shops, and late night bars. Food carts line Central Park West and dot the inner streets. We’re ﬂanked by the largest city parks, so you can grab a nosh and head to nature.

There’s an overabundance of wonderul things to eat: and this is true whether you’re a human, or a rat. All this food generates a Mount Everest of garbage. Of course, the Department of Sanitation realizes this and provides us with the optimum amount of trash bins, right? Wrong. While we have more restaurants and markets, the Upper West side trash district has fewer trash cans than the Upper East side. In response to his squeaky wheel constituents, East Side Counci Member Ban Kallos used discretionary funds to purchase 284 “High-End Litter Baskets,” with narrow apertures to discourage large trash bag dumping. Similar squeaky wheels made complaints to the Upper West Side’s Council Member Helen Rosenthal, but report that her office has been unresponsive. One irate Upper West Sider wrote on a neighborhood app, “I sent photos to Council Member Rosenthal’s office every day for 3 months and they proceeded to ﬁght me every step of the way.” Recently our paper reported on an Upper East Side turf dispute between two non-proﬁts that employ people to

empty trash cans. (http://www.ourtownny.com/local-news/20181210/ territorial-dispute-over-cleanup-program) So the UES not only has more cans and better cans, it has people ﬁghting to help empty the trash. Certain areas of the UWS are cleaner than others, such as areas with Business Improvement Districts, known as BIDs. The Columbus Avenue BID runs roughly from 67th Street to 82nd Street, between Amsterdam and Columbus. It has just two people assigned to clean-up duty, but that helps to keep the streets swept and the trash picked up. The Lincoln Square staff is larger, and you can see the difference. If you stroll up Amsterdam during or after a weekend, you’ll see the strain of having an enormous amount of foot and food traffic on the sidewalk. At night, it’s time for the vermin to come out and feed, plain and simple. I recall a romantic, early evening hand-in-hand stroll in Central Park, that morphed into a horror scene. As soon as the sun set, rats began gamboling noisily among the leaves, running in droves across the pathway. They seemed annoyed that we dared to be in their area.

Photo: Daniel X. O’Neil, via ﬂickr Daytime parkgoers reported to Assemblywoman Linda Rosenthal (not to be confused with Council Member Helen Rosenthal) that rats were jumping into baby strollers to steal snacks. None of us would leave open trash on our apartment ﬂoor, or leave out stale bread thinking we’re feeding pigeons when in fact we’re increasing the vermin population, right? All this open food is a rat magnet and multiplier. Without a sufficient number or types of cans to accommodate the amount of trash generated by all our popular

food venues, we invite rats and mice to an endless bouffet. We will not reduce the rat population until we increase the amount of receptacles and the frequency that the trash is removed from the area. So, what can you do? You can start by contacting your Community Board, or Helen Rosenthal’s office: helen@ helenrosenthal.com. I love my Upper West Side. I want to keep all our “breadbasket of the city” charm. To do this, we need to get rid of a few million of our unwanted visitors. 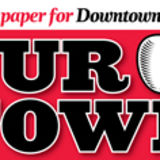