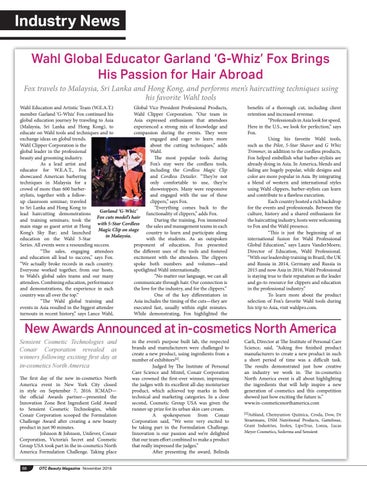 Industry News Wahl Global Educator Garland ‘G-Whiz’ Fox Brings His Passion for Hair Abroad Fox travels to Malaysia, Sri Lanka and Hong Kong, and performs men’s haircutting techniques using his favorite Wahl tools Global Vice President Professional Products, Wahl Education and Artistic Team (W.E.A.T.) Wahl Clipper Corporation. “Our team in member Garland ‘G-Whiz’ Fox continued his Asia expressed enthusiasm that attendees global education journey by traveling to Asia experienced a strong mix of knowledge and (Malaysia, Sri Lanka and Hong Kong), to compassion during the events. They were educate on Wahl tools and techniques and to engaged and eager to learn more exchange ideas on global trends. about the cutting techniques,” adds Wahl Clipper Corporation is the Wahl. global leader in the professional The most popular tools during beauty and grooming industry. Fox’s stay were the cordless tools, As a lead artist and including the Cordless Magic Clip educator for W.E.A.T., Fox and Cordless Detailer. “They’re not showcased American barbering only comfortable to use, they’re techniques in Malaysia for a showstoppers. Many were responsive crowd of more than 600 barberand engaged with the use of these stylists, together with a followclippers,” says Fox. up classroom seminar; traveled “Everything comes back to the to Sri Lanka and Hong Kong to Garland ‘G-Whiz’ functionality of clippers,” adds Fox. lead haircutting demonstrations Fox cuts model’s hair During the training, Fox immersed and training seminars; took the with 5-Star Cordless the sales and management teams in each main stage as guest artist at Hong Magic Clip on stage country to learn and participate along Kong’s Sky Bar; and launched in Malaysia. with the students. As an outspoken education on the Wahl 5-Star proponent of education, Fox presented Series. All events were a resounding success. the different uses of the tools and fostered “The sales, engaging attendees excitement with the attendees. The clippers and education all lead to success,” says Fox. spoke both numbers and volumes—and “We actually broke records in each country. spotlighted Wahl internationally. Everyone worked together, from our hosts, “No matter our language, we can all to Wahl’s global sales teams and our many communicate through hair. Our connection is attendees. Combining education, performance the love for the industry, and for the clippers.” and demonstrations, the experience in each One of the key differentiators in country was all over the top.” Asia includes the timing of the cuts—they are “The Wahl global training and executed fast, usually within eight minutes. events in Asia resulted in the biggest attendee While demonstrating, Fox highlighted the turnouts in recent history,” says Lance Wahl,

benefits of a thorough cut, including client retention and increased revenue. “Professionals in Asia look for speed. Here in the U.S., we look for perfection,” says Fox. Using his favorite Wahl tools, such as the Pilot, 5-Star Shaver and G Whiz Trimmer, in addition to the cordless products, Fox helped embellish what barber-stylists are already doing in Asia. In America, blends and fading are hugely popular, while designs and color are more popular in Asia. By integrating a blend of western and international styles using Wahl clippers, barber-stylists can learn and contribute to a flawless execution. Each country hosted a rich backdrop for the events and professionals. Between the culture, history and a shared enthusiasm for the haircutting industry, hosts were welcoming to Fox and the Wahl presence. “This is just the beginning of an international fusion for Wahl Professional Global Education,” says Laura VanderMoere, Director of Education, Wahl Professional. “With our leadership training in Brazil, the UK and Russia in 2014, Germany and Russia in 2015 and now Asia in 2016, Wahl Professional is staying true to their reputation as the leader and go-to resource for clippers and education in the professional industry.” To learn more about the product selection of Fox’s favorite Wahl tools during his trip to Asia, visit wahlpro.com.

in the event’s purpose built lab, the respected brands and manufacturers were challenged to create a new product, using ingredients from a number of exhibitors[2]. Judged by The Institute of Personal Care Science and Mintel, Conair Corporation was crowned the first-ever winner, impressing the judges with its excellent all-day moisturiser product, which achieved top marks in both technical and marketing categories. In a close second, Cosmetic Group USA was given the runner up prize for its urban skin care cream. A spokesperson from Conair Corporation said, “We were very excited to be taking part in the Formulation Challenge. Innovation is our passion and we’re delighted that our team effort combined to make a product that really impressed the judges.” After presenting the award, Belinda

Carli, Director at The Institute of Personal Care Science, said, “Asking five finished product manufacturers to create a new product in such a short period of time was a difficult task. The results demonstrated just how creative an industry we work in. The in-cosmetics North America event is all about highlighting the ingredients that will help inspire a new generation of cosmetics and this competition showed just how exciting the future is.” www.in-cosmeticsnorthamerica.com [2]Ashland, 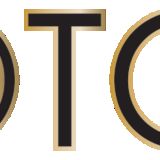