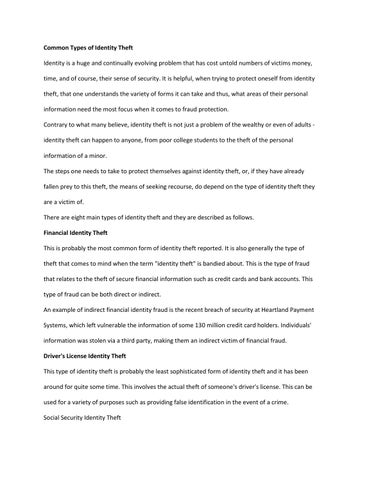 Common Types of Identity Theft Identity is a huge and continually evolving problem that has cost untold numbers of victims money, time, and of course, their sense of security. It is helpful, when trying to protect oneself from identity theft, that one understands the variety of forms it can take and thus, what areas of their personal information need the most focus when it comes to fraud protection. Contrary to what many believe, identity theft is not just a problem of the wealthy or even of adults identity theft can happen to anyone, from poor college students to the theft of the personal information of a minor. The steps one needs to take to protect themselves against identity theft, or, if they have already fallen prey to this theft, the means of seeking recourse, do depend on the type of identity theft they are a victim of. There are eight main types of identity theft and they are described as follows. Financial Identity Theft This is probably the most common form of identity theft reported. It is also generally the type of theft that comes to mind when the term &quot;identity theft&quot; is bandied about. This is the type of fraud that relates to the theft of secure financial information such as credit cards and bank accounts. This type of fraud can be both direct or indirect. An example of indirect financial identity fraud is the recent breach of security at Heartland Payment Systems, which left vulnerable the information of some 130 million credit card holders. Individuals&#39; information was stolen via a third party, making them an indirect victim of financial fraud. Driver&#39;s License Identity Theft This type of identity theft is probably the least sophisticated form of identity theft and it has been around for quite some time. This involves the actual theft of someone&#39;s driver&#39;s license. This can be used for a variety of purposes such as providing false identification in the event of a crime. Social Security Identity Theft

This type of theft actually encompasses two fairly different types of fraud. First and foremost, this refers to the theft of someone&#39;s social security number. This is an incredibly important piece of information and can allow a criminal to not only attempt to do things like open bank or other accounts using this information, but it can also be used to obtain government document like passports too. The other type of fraud this refers to is the use of social security information as a means of obtaining the social security benefits of the victim. Unfortunately, this often means targeting the elderly or disabled. Criminal Identity Theft This typically refers to identity theft with the purposes of using said identity as false identity. This is often used if the criminal is caught for a traffic violation or other crime. While the victim can get these charges dropped, it can be a huge hassle and take a lot of time and effort to make right. Medical Identity Theft This type of identity theft is a lot more rare than the others described above, but it too can cause a lot of negative ramifications for the victim. It can also be dangerous to the victim&#39;s health. This type of fraud involves the theft of medical information and can be used to commit insurance fraud. This can be dangerous in that the criminal can seek care using this information, leading to inaccurate information on medical history forms. Child Identity Theft It would seem that, as a minor, the risk for identity theft would be non-existent, but unfortunately, that is not the case. In cases of child identity theft, a child&#39;s personal information such as name and social security number are used for a variety of different types of financial and government fraud. This includes the opening of bank accounts, credit cards, and even obtaining government documents using the minor&#39;s identity. Insurance Identity Theft

This type of identity theft is not new, per say, but it is becoming a more popular target for criminals. As the name implies, this involves the theft of a victim&#39;s insurance information - whether it be medical insurance, car insurance, home insurance, etc. This often leads to financial ramifications as the victim might find themselves faced with huge medical bills that result from criminal fraud, higher premiums, and even difficulties obtaining new coverage in the future. Synthetic Identity Theft This a so-called &quot;newer&quot; form of identity theft that is also a bit more sophisticated than the other forms described above. It entails the theft of bits of personal information from a number of different people. This information is then combined and used to create an entirely new identity. This new identity can be used to apply for credit, open various accounts, and even apply for certain documents under a completely false identity. When it comes to identity theft, the problem is much more widespread than many originally thought. Those who don&#39;t have much have the mistaken idea that their meager finances and identity are not attractive to thieves and there, they would be wrong. Identity theft can affect the young or old, the rich or poor - criminals do not make these distinctions very often when committing crime. Understanding the different threats to personal information and how it can be used will help conscious consumers better understand the risks as well as means they have to protect themselves against fraud. Learn more about identity theft protection at http://www.identitytheftaid.org/best-identity-theftprotection-services/ 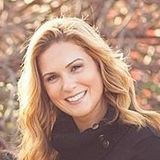