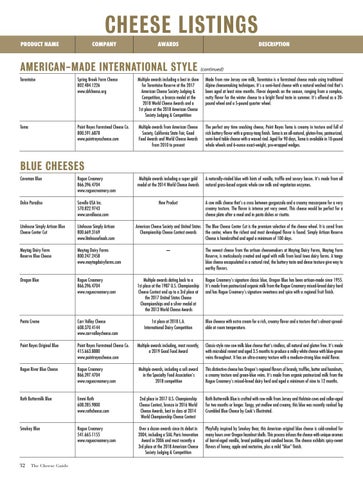 Made from raw Jersey cow milk, Tarentaise is a farmstead cheese made using traditional Alpine cheesemaking techniques. It&#39;s a semi-hard cheese with a natural washed rind that&#39;s been aged at least nine months. Flavor depends on the season, ranging from a complex, nutty flavor for the winter cheese to a bright floral taste in summer. It&#39;s offered as a 20pound wheel and a 5-pound quarter wheel.

The perfect any time snacking cheese, Point Reyes Toma is creamy in texture and full of rich buttery flavor with a grassy-tang finish. Toma is an all-natural, gluten-free, pasteurized, semi-hard table cheese with a waxed rind. Aged for 90 days, Toma is available in 10-pound whole wheels and 6-ounce exact-weight, pre-wrapped wedges.

A naturally-rinded blue with hints of vanilla, truffle and savory bacon. It&#39;s made from all natural grass-based organic whole cow milk and vegetarian enzymes.

A cow milk cheese that&#39;s a cross between gorgonzola and a creamy mascarpone for a very creamy texture. The flavor is intense yet very sweet. This cheese would be perfect for a cheese plate after a meal and in pasta dishes or risotto.

American Cheese Society and United States The Blue Cheese Center Cut is the premium selection of the cheese wheel. It is cored from Championship Cheese Contest awards the center, where the richest and most developed flavor is found. Simply Artisan Reserve Cheese is handcrafted and aged a minimum of 100 days. —

The newest cheese from the artisan cheesemakers at Maytag Dairy Farms, Maytag Farm Reserve, is meticulously created and aged with milk from local Iowa dairy farms. A tangy blue cheese encapsulated in a natural rind, the buttery taste and dense texture give way to earthy flavors.

Blue cheeese with extra cream for a rich, creamy flavor and a texture that&#39;s almost spreadable at room temperature.

Multiple awards including, most recently, a 2019 Good Food Award

Classic-style raw cow milk blue cheese that&#39;s rindless, all natural and gluten free. It&#39;s made with microbial rennet and aged 3.5 months to produce a milky white cheese with blue-green veins throughout. It has an ultra-creamy texture with a medium-strong blue mold flavor.

Multiple awards, including a sofi award in the Specialty Food Association&#39;s 2018 competition

This distinctive cheese has Oregon&#39;s regional flavors of brandy, truffles, butter and hazelnuts, a creamy texture and green-blue veins. It&#39;s made from organic pasteurized milk from the Rogue Creamery&#39;s mixed-breed dairy herd and aged a minimum of nine to 12 months.

Roth Buttermilk Blue is crafted with raw milk from Jersey and Holstein cows and cellar-aged for two months or longer. Tangy, yet mellow and creamy, this blue was recently ranked Top Crumbled Blue Cheese by Cook&#39;s Illustrated.

Over a dozen awards since its debut in 2004, including a SIAL Paris Innovation Award in 2006 and most recently a 3rd place at the 2018 American Cheese Society Judging &amp; Competition

Playfully inspired by Smokey Bear, this American original blue cheese is cold-smoked for many hours over Oregon hazelnut shells. This process infuses the cheese with unique aromas of barrel-aged vanilla, bread pudding and candied bacon. The cheese exhibits spicy-sweet flavors of honey, apple and nectarine, plus a mild “blue” finish.