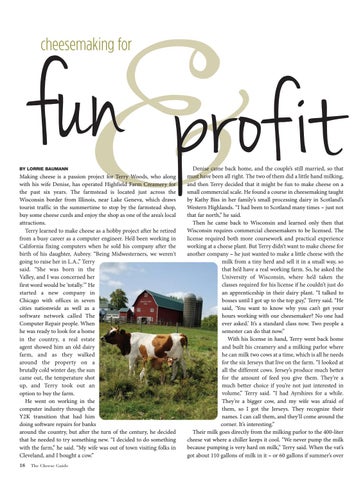 Making cheese is a passion project for Terry Woods, who along with his wife Denise, has operated Highfield Farm Creamery for the past six years. The farmstead is located just across the Wisconsin border from Illinois, near Lake Geneva, which draws tourist traffic in the summertime to stop by the farmstead shop, buy some cheese curds and enjoy the shop as one of the area’s local attractions. Terry learned to make cheese as a hobby project after he retired from a busy career as a computer engineer. He’d been working in California fixing computers when he sold his company after the birth of his daughter, Aubrey. “Being Midwesterners, we weren&#39;t going to raise her in L.A.,” Terry said. “She was born in the Valley, and I was concerned her first word would be &#39;totally.&#39;” He started a new company in Chicago with offices in seven cities nationwide as well as a software network called The Computer Repair people. When he was ready to look for a home in the country, a real estate agent showed him an old dairy farm, and as they walked around the property on a brutally cold winter day, the sun came out, the temperature shot up, and Terry took out an option to buy the farm. He went on working in the computer industry through the Y2K transition that had him doing software repairs for banks around the country, but after the turn of the century, he decided that he needed to try something new. “I decided to do something with the farm,” he said. “My wife was out of town visiting folks in Cleveland, and I bought a cow.” 18

Denise came back home, and the couple’s still married, so that must have been all right. The two of them did a little hand milking, and then Terry decided that it might be fun to make cheese on a small commercial scale. He found a course in cheesemaking taught by Kathy Biss in her family’s small processing dairy in Scotland’s Western Highlands. “I had been to Scotland many times – just not that far north,” he said. Then he came back to Wisconsin and learned only then that Wisconsin requires commercial cheesemakers to be licensed. The license required both more coursework and practical experience working at a cheese plant. But Terry didn’t want to make cheese for another company – he just wanted to make a little cheese with the milk from a tiny herd and sell it in a small way, so that he’d have a real working farm. So, he asked the University of Wisconsin, where he’d taken the classes required for his license if he couldn’t just do an apprenticeship in their dairy plant. “I talked to bosses until I got up to the top guy,” Terry said. “He said, ‘You want to know why you can’t get your hours working with our cheesemaker? No one had ever asked.’ It’s a standard class now. Two people a semester can do that now.” With his license in hand, Terry went back home and built his creamery and a milking parlor where he can milk two cows at a time, which is all he needs for the six Jerseys that live on the farm. “I looked at all the different cows. Jersey’s produce much better for the amount of feed you give them. They’re a much better choice if you’re not just interested in volume,” Terry said. “I had Ayrshires for a while. They’re a bigger cow, and my wife was afraid of them, so I got the Jerseys. They recognize their names. I can call them, and they’ll come around the corner. It’s interesting.” Their milk goes directly from the milking parlor to the 400-liter cheese vat where a chiller keeps it cool. “We never pump the milk because pumping is very hard on milk,” Terry said. When the vat’s got about 110 gallons of milk in it – or 60 gallons if summer’s over