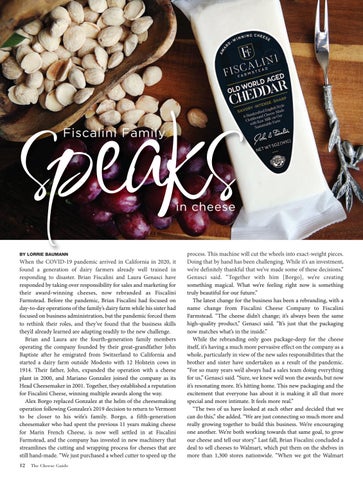 When the COVID-19 pandemic arrived in California in 2020, it found a generation of dairy farmers already well trained in responding to disaster. Brian Fiscalini and Laura Genasci have responded by taking over responsibility for sales and marketing for their award-winning cheeses, now rebranded as Fiscalini Farmstead. Before the pandemic, Brian Fiscalini had focused on day-to-day operations of the family’s dairy farm while his sister had focused on business administration, but the pandemic forced them to rethink their roles, and they’ve found that the business skills they’d already learned are adapting readily to the new challenge. Brian and Laura are the fourth-generation family members operating the company founded by their great-grandfather John Baptiste after he emigrated from Switzerland to California and started a dairy farm outside Modesto with 12 Holstein cows in 1914. Their father, John, expanded the operation with a cheese plant in 2000, and Mariano Gonzalez joined the company as its Head Cheesemaker in 2001. Together, they established a reputation for Fiscalini Cheese, winning multiple awards along the way. Alex Borgo replaced Gonzalez at the helm of the cheesemaking operation following Gonzalez’s 2019 decision to return to Vermont to be closer to his wife’s family. Borgo, a fifth-generation cheesemaker who had spent the previous 11 years making cheese for Marin French Cheese, is now well settled in at Fiscalini Farmstead, and the company has invested in new machinery that streamlines the cutting and wrapping process for cheeses that are still hand-made. “We just purchased a wheel cutter to speed up the 12

process. This machine will cut the wheels into exact-weight pieces. Doing that by hand has been challenging. While it’s an investment, we’re definitely thankful that we’ve made some of these decisions,” Genasci said. “Together with him [Borgo], we’re creating something magical. What we’re feeling right now is something truly beautiful for our future.” The latest change for the business has been a rebranding, with a name change from Fiscalini Cheese Company to Fiscalini Farmstead. “The cheese didn’t change; it’s always been the same high-quality product,” Genasci said. “It’s just that the packaging now matches what’s in the inside.” While the rebranding only goes package-deep for the cheese itself, it’s having a much more pervasive effect on the company as a whole, particularly in view of the new sales responsibilities that the brother and sister have undertaken as a result of the pandemic. “For so many years we’d always had a sales team doing everything for us,” Genasci said. “Sure, we knew we’d won the awards, but now it’s resonating more. It’s hitting home. This new packaging and the excitement that everyone has about it is making it all that more special and more intimate. It feels more real.” “The two of us have looked at each other and decided that we can do this,” she added. “We are just connecting so much more and really growing together to build this business. We’re encouraging one another. We’re both working towards that same goal, to grow our cheese and tell our story.” Last fall, Brian Fiscalini concluded a deal to sell cheeses to Walmart, which put them on the shelves in more than 1,300 stores nationwide. “When we got the Walmart