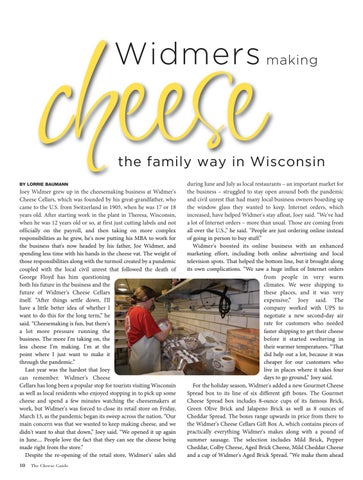 the family way in Wisconsin

Joey Widmer grew up in the cheesemaking business at Widmer's Cheese Cellars, which was founded by his great-grandfather, who came to the U.S. from Switzerland in 1905, when he was 17 or 18 years old. After starting work in the plant in Theresa, Wisconsin, when he was 12 years old or so, at first just cutting labels and not officially on the payroll, and then taking on more complex responsibilities as he grew, he's now putting his MBA to work for the business that's now headed by his father, Joe Widmer, and spending less time with his hands in the cheese vat. The weight of those responsibilities along with the turmoil created by a pandemic coupled with the local civil unrest that followed the death of George Floyd has him questioning both his future in the business and the future of Widmer's Cheese Cellars itself. “After things settle down, I'll have a little better idea of whether I want to do this for the long term,” he said. “Cheesemaking is fun, but there's a lot more pressure running the business. The more I'm taking on, the less cheese I'm making. I'm at the point where I just want to make it through the pandemic.” Last year was the hardest that Joey can remember. Widmer's Cheese Cellars has long been a popular stop for tourists visiting Wisconsin as well as local residents who enjoyed stopping in to pick up some cheese and spend a few minutes watching the cheesemakers at work, but Widmer's was forced to close its retail store on Friday, March 13, as the pandemic began its sweep across the nation. “Our main concern was that we wanted to keep making cheese, and we didn't want to shut that down,” Joey said. “We opened it up again in June.... People love the fact that they can see the cheese being made right from the store.” Despite the re-opening of the retail store, Widmer's' sales slid 10

during June and July as local restaurants – an important market for the business – struggled to stay open around both the pandemic and civil unrest that had many local business owners boarding up the window glass they wanted to keep. Internet orders, which increased, have helped Widmer's stay afloat, Joey said. “We've had a lot of Internet orders – more than usual. Those are coming from all over the U.S.,” he said. “People are just ordering online instead of going in person to buy stuff.” Widmer's boosted its online business with an enhanced marketing effort, including both online advertising and local television spots. That helped the bottom line, but it brought along its own complications. “We saw a huge influx of Internet orders from people in very warm climates. We were shipping to these places, and it was very expensive,” Joey said. The company worked with UPS to negotiate a new second-day air rate for customers who needed faster shipping to get their cheese before it started sweltering in their warmer temperatures. “That did help out a lot, because it was cheaper for our customers who live in places where it takes four days to go ground,” Joey said. For the holiday season, Widmer's added a new Gourmet Cheese Spread box to its line of six different gift boxes. The Gourmet Cheese Spread box includes 8-ounce cups of its famous Brick, Green Olive Brick and Jalapeno Brick as well as 8 ounces of Cheddar Spread. The boxes range upwards in price from there to the Widmer's Cheese Cellars Gift Box A, which contains pieces of practically everything Widmer's makes along with a pound of summer sausage. The selection includes Mild Brick, Pepper Cheddar, Colby Cheese, Aged Brick Cheese, Mild Cheddar Cheese and a cup of Widmer's Aged Brick Spread. “We make them ahead