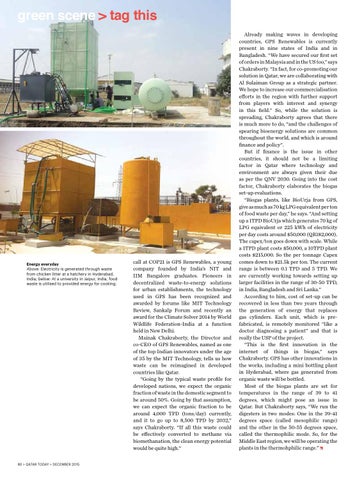 Energy everyday Above: Electricity is generated through waste from chicken litter at a hatchery in Hyderabad, India; below: At a university in Jaipur, India, food waste is utilised to provided energy for cooking.

call at COP21 is GPS Renewables, a young company founded by India’s NIT and IIM Bangalore graduates. Pioneers in decentralized waste-to-energy solutions for urban establishments, the technology used in GPS has been recognized and awarded by forums like MIT Technology Review, Sankalp Forum and recently an award for the Climate Solver 2014 by World Wildlife Federation-India at a function held in New Delhi. Mainak Chakraborty, the Director and co-CEO of GPS Renewables, named as one of the top Indian innovators under the age of 35 by the MIT Technology, tells us how waste can be reimagined in developed countries like Qatar. “Going by the typical waste profile for developed nations, we expect the organic fraction of waste in the domestic segment to be around 50%. Going by that assumption, we can expect the organic fraction to be around 4,000 TPD (tons/day) currently, and it to go up to 8,500 TPD by 2032,” says Chakraborty. “If all this waste could be effectively converted to methane via biomethanation, the clean energy potential would be quite high.”

Already making waves in developing countries, GPS Renewables is currently present in nine states of India and in Bangladesh. “We have secured our first set of orders in Malaysia and in the US too,” says Chakraborty. “In fact, for co-promoting our solution in Qatar, we are collaborating with Al Sulaiman Group as a strategic partner. We hope to increase our commercialisation efforts in the region with further support from players with interest and synergy in this field.” So, while the solution is spreading, Chakraborty agrees that there is much more to do, “and the challenges of spearing bioenergy solutions are common throughout the world, and which is around finance and policy”. But if finance is the issue in other countries, it should not be a limiting factor in Qatar where technology and environment are always given their due as per the QNV 2030. Going into the cost factor, Chakraborty elaborates the biogas set-up evaluations. “Biogas plants, like BioUrja from GPS, give as much as 70 kg LPG equivalent per ton of food waste per day,” he says. “And setting up a 1TPD BioUrja which generates 70 kg of LPG equivalent or 225 kWh of electricity per day costs around $50,000 (QR182,000). The capex/ton goes down with scale. While a 1TPD plant costs $50,000, a 10TPD plant costs $215,000. So the per tonnage Capex comes down to $21.5k per ton. The current range is between 0.1 TPD and 5 TPD. We are currently working towards setting up larger facilities in the range of 30-50 TPD, in India, Bangladesh and Sri Lanka.” According to him, cost of set-up can be recovered in less than two years through the generation of energy that replaces gas cylinders. Each unit, which is prefabricated, is remotely monitored “like a doctor diagnosing a patient” and that is really the USP of the project. “This is the first innovation in the internet of things in biogas,” says Chakraborty. GPS has other innovations in the works, including a mini bottling plant in Hyderabad, where gas generated from organic waste will be bottled. Most of the biogas plants are set for temperatures in the range of 39 to 41 degrees, which might pose an issue in Qatar. But Chakraborty says, “We run the digesters in two modes: One in the 39-41 degrees space (called mesophilic range) and the other in the 50-55 degrees space, called the thermophilic mode. So, for the Middle East region, we will be operating the plants in the thermohphilic range.” 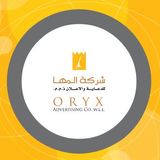 THE YEAR THAT WAS In our annual recap of the year gone by, we shed light on some of the memorable and world-changing events of 2015.

THE YEAR THAT WAS In our annual recap of the year gone by, we shed light on some of the memorable and world-changing events of 2015.