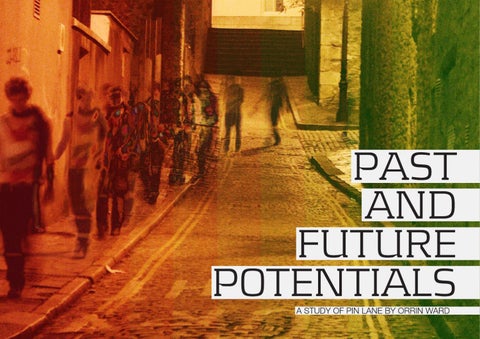 introduction For this project I have set out to investigate Pin Lane near the Barbican in Plymouth and create a project from it. My expectations are to explore different aspects of the lane and then choose something Iâ&#x20AC;&#x2122;ve found that interests me and develop it into an interesting piece of art. I have a particular interest in automation and transformation of objects and spaces and hope to angle my progress in this direction.

It seems to serve three purposes - parking, pedestrian throughfare and as a fire/waste exit for the buildings on the east side. It has a broken, uneven cobbled street. The walls on the west side look very old with large brickwork and filled in archways. The east side is more modern and backs onto the Co-Operative newsagent, Lavish cocktail bar and a house. The street goes uphill from South to North.

pin lane | objects Here are a collection of objects and points of interest found in Pin Lane. From top-left; The bright light. Trash at the back of Lavish. Lights coming from Lavish. A fence and a garden. Plants growing from a wall. Plants overgrowing from the garden. An empty wine bottle. Paint dripped from a high wall. Two cans of Carlsberg Special Brew. When you are in Pin Lane it seems very dull and grey, but there is actually a lot of vibrant colour there. Every visit you are bound to find a new piece of binge-drink memorabilia.

rivers After looking at people moving through Pin Lane for some time I started to think about the physical behaviours of the people as a group. I realised there are strong similarities between the way the lane is used and a section of a river. You can see a river as the journey of a water molecule from rain drop until it settles in an ocean. A river provides a scenic route for the molecule and serves the purpose of getting it from A to B. Pin Lane serves this same purpose for the people that use it. It is just a lot more direct and a lot less memorable. I aim to use this river metaphor to try and change the perception of Pin Lane and make it more interesting.

pin lane | objects These images are examples of the first technique I experimented with to show the â&#x20AC;&#x153;past and future potentialâ&#x20AC;? of something in a single still image. The object I chose was people and I tried to show the immediate past and future of the people walking around Pin Lane in a single timeframe. When you take a photograph you capture a single moment. When you film something you capture a series of single moments that convince you there is motion, or a past and a future. I used clean, coloured lines to show the past and the future actions of the people in the street, to give the viewer more insight into motion, without trying to trick them. The red lines show where a person has come from and the green lines show where they move to after the photo was taken. As a collage it has some visual appeal, but serves a better purpose as a way of recording motion and ground coverage of a group of people.

evaluation The final video can be found at: http://www.youtube.com/watch?v=SB81IBxCE4c Looking at the renegotiated Pin Lane that was generated I can see that it has changed structure quite a lot and become quite river-like. Analysing the layout with the current buildings in the space I think the outcome is positive: The block that shifted into the middle of the lane would be good for reducing awkward long walks catching strangers eyes. The Barbican/co-op entrance is a lot wider and more inviting. it really opens the lane up so it isnâ&#x20AC;&#x2122;t as claustrophobic. The back of Lavish has opened up and could potentially offer outdoor alfresco dining there. Overall I am very satisfied with the outcome. Past and Future Potentials

A Study of Pin lane. This project was created for my Production of Space Module in my final year on BSc(Hons) Digital Art and Technology at...

Past and Future Potentials

A Study of Pin lane. This project was created for my Production of Space Module in my final year on BSc(Hons) Digital Art and Technology at...