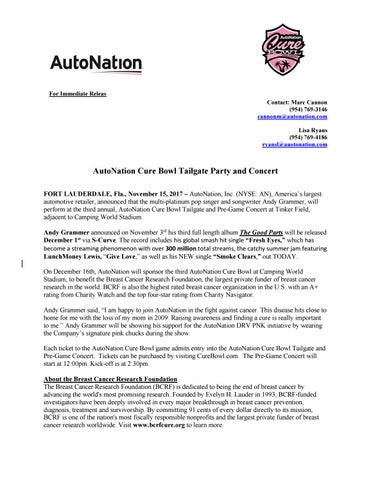 AutoNation Cure Bowl Tailgate Party and Concert FORT LAUDERDALE, Fla., November 15, 2017 – AutoNation, Inc. (NYSE: AN), America’s largest automotive retailer, announced that the multi-platinum pop singer and songwriter Andy Grammer, will perform at the third annual, AutoNation Cure Bowl Tailgate and Pre-Game Concert at Tinker Field, adjacent to Camping World Stadium. Andy Grammer announced on November 3rd his third full length album The Good Parts will be released December 1st via S-Curve. The record includes his global smash hit single “Fresh Eyes,” which has become a streaming phenomenon with over 300 million total streams, the catchy summer jam featuring LunchMoney Lewis, “Give Love,” as well as his NEW single “Smoke Clears,” out TODAY. On December 16th, AutoNation will sponsor the third AutoNation Cure Bowl at Camping World Stadium, to benefit the Breast Cancer Research Foundation, the largest private funder of breast cancer research in the world. BCRF is also the highest rated breast cancer organization in the U.S. with an A+ rating from Charity Watch and the top four-star rating from Charity Navigator. Andy Grammer said, “I am happy to join AutoNation in the fight against cancer. This disease hits close to home for me with the loss of my mom in 2009. Raising awareness and finding a cure is really important to me.” Andy Grammer will be showing his support for the AutoNation DRV PNK initiative by wearing the Company’s signature pink chucks during the show. Each ticket to the AutoNation Cure Bowl game admits entry into the AutoNation Cure Bowl Tailgate and Pre-Game Concert. Tickets can be purchased by visiting CureBowl.com. The Pre-Game Concert will start at 12:00pm. Kick-off is at 2:30pm. About the Breast Cancer Research Foundation The Breast Cancer Research Foundation (BCRF) is dedicated to being the end of breast cancer by advancing the world&#39;s most promising research. Founded by Evelyn H. Lauder in 1993, BCRF-funded investigators have been deeply involved in every major breakthrough in breast cancer prevention, diagnosis, treatment and survivorship. By committing 91 cents of every dollar directly to its mission, BCRF is one of the nation&#39;s most fiscally responsible nonprofits and the largest private funder of breast cancer research worldwide. Visit www.bcrfcure.org to learn more. 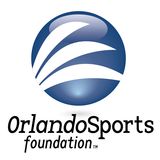