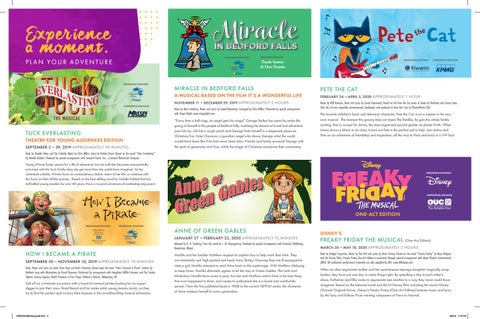 A MUSICAL BASED ON THE FILM IT’S A WONDERFUL LIFE

Music by Will Aronson; Book and Lyrics by Sarah Hammond; Based on the Pete the Cat series of books by Kimberly and James Dean. Pete the Cat was originally commissioned, developed, and produced in New York City by TheatreWorks USA

Book by Mark Cabaniss; Music and Lyrics by Lowell Alexander; Arranged by Chris Miller; Presented by special arrangement with Stage Rights www.stagerights.com “Every time a bell rings, an angel gets his wings!” George Bailey has spent his entire life giving of himself to the people of Bedford Falls, watching his dreams of travel and adventure pass him by. Life hits a rough patch and George finds himself in a desperate place on Christmas Eve. Enter Clarence, a guardian angel who shows George what the world would have been like if he had never been born. Friends and family surround George with the spirit of generosity and love, while the magic of Christmas transforms their community.

The favorite children’s book and television character, Pete the Cat, is on a mission in his very own musical. The moment this groovy blue cat meets The Biddles, he gets the whole family rocking- that is, except for Jimmy, the most organized second grader on planet Earth. When Jimmy draws a blank in art class, it turns out Pete is the perfect pal to help. Join Jimmy and Pete on an adventure of friendship and inspiration, all the way to Paris and back in a VW Bus!

Book by Claudia Shear and Tim Federle; Music by Chris Miller; Lyrics by Nathan Tysen; Based on the novel “Tuck Everlasting” by Natalie Babbitt; Produced by special arrangement with Samuel French, Inc., a Concord Theatricals Company Young Winnie Foster yearns for a life of adventure, but not until she becomes unexpectedly entwined with the Tuck Family does she get more than she could have imagined. As her adventure unfolds, Winnie faces an extraordinary choice: return to her life, or continue with the Tucks on their infinite journey. Based on the best-selling novel by Natalie Babbitt that has enthralled young readers for over 40 years, this is a musical adventure of everlasting enjoyment.

HOW I BECAME A PIRATE SEPTEMBER 30 – NOVEMBER 10, 2019 APPROXIMATELY 70 MINUTES Book, Music and Lyrics by Janet Yates Vogt and Mark Friedman; Based upon the book “How I Became A Pirate” written by Melinda Long with illustrations by David Shannon; Performed by arrangement with Houghton Mifflin Harcourt and The Sandra Dijkstra Literary Agency; World Premiere at First Stage Children’s Theatre, Milwaukee, WI. Sail off on a fantastic excursion with a band of comical pirates looking for an expert digger to join their crew. Braid Beard and his mates enlist young Jeremy Jacob, as they try to find the perfect spot to bury their treasure in this swashbuckling musical adventure.

Marilla and her brother Matthew request an orphan boy to help work their farm. They are mistakenly sent high-spirited red-head Anne Shirley. Knowing they are ill-equipped to raise a girl, Marilla attempts to send Anne back to the orphanage. With Matthew lobbying to keep Anne, Marilla ultimately agrees to let her stay at Green Gables. The trials and tribulations Marilla fears come to pass, but she and Matthew admit Anne is the best thing that ever happened to them, and comes to understand she is a loved and worthwhile person. From the first published book in 1908 to the current NETFLIX series, the character of Anne endears herself to every generation.

MARCH 30 – MAY 10, 2020 APPROXIMATELY 2 HOURS Book by Bridget Carpenter; Music by Tom Kitt and Lyrics by Brian Yorkey; Based on the novel “Freaky Friday” by Mary Rodgers and the Disney Films; Freaky Friday One Act Edition is presented through special arrangement with Music Theater International (MTI). All authorized performance materials are also supplied by MTI. www.MTIshows.com When an uber-organized mother and her spontaneous teenage daughter magically swap bodies, they have just one day to make things right. By spending a day in each other’s shoes, Katherine and Ellie come to appreciate one another in a way they never could have imagined. Based on the beloved novel and the hit Disney films including the recent Disney Channel Original Movie, Disney’s Freaky Friday (One-Act Edition) features music and lyrics by the Tony and Pulitzer Prize-winning composers of Next to Normal. 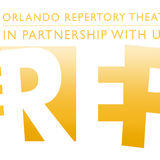 Learn about our 2019-2020 offerings for your class's field trip activities!

Learn about our 2019-2020 offerings for your class's field trip activities!