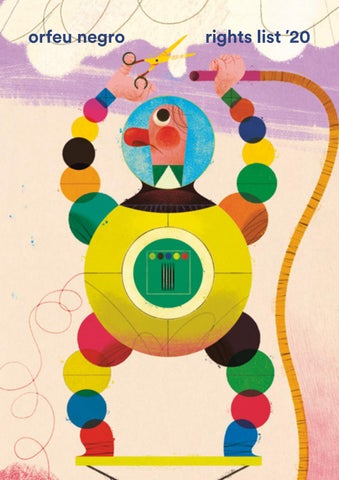 — Once upon a time there were two friends, an orange dog, a white tree and a green… cloud? Hold on! This book is wrong! TRUE COLOURS is a funny and visually poetic story about freedom and an upside down journey through surrealist landscapes where rain falls from trees and clouds bear fruit. An eccentric book that invites us to paint the world in many tones and colours. — GONÇALO VIANA (Portugal) is an architect and illustrator, published worldwide. His work has been internationally awarded and selected for several exhibitions. Viana also collaborates with publications such as The New York Times and Variety.

— Birds stopped singing. Cats did not meow. And cows refused to give milk. Animals seemed to have made a pact… Eduarda Lima’s debut album is a story about the impact of humans on the planet. From little insects to big elephants and gorillas, animals silently scream together for a world of biodiversity and well-being. Beautifully illustrated, THE PROTEST delicately captures our imagination while encouraging critical thinking. — EDUARDA LIMA (Portugal) is an illustrator and 2D animator. She studied architecture at the University College of London and Motion-Design at the London College of Communication. In 2019 she participated in the annual exhibition ILUSTRA 33.

— It wasn’t that long ago that girls were forbidden to ride bicycles. Also, it wasn’t long ago that girls had to dress up as boys in order to stand out in society. This is the case of Alfonsina Strada, a girl who loved to ride her bicycle, but had to fight hard for her dream. In 1924, after winning several competitions, she became the first woman in history to ride in a Grand Tour: the Giro d’Italia. Fast as the wind, she turned into a legend and a symbol of resistance and determination. — JOAN NEGRESCOLOR (Spain) is an award winning illustrator, best known for his beautiful album ANIMAL CITY (Orfeu Negro, 2017), double winner of the Junceda Award 2018 and other international prizes.

— It all began when EVERYTHING was in the same place. We don’t know how it appeared, but we do know that the Universe started in a very small space. It seems impossible, but it’s true: when it all began, all the big things were very very little. IMPOSSIBLE tells us the history of the Universe from the Big Bang to the birth of plants, animals and humans. Catarina Sobral’s first non-fiction book is a colourful journey through particles, stars, dinossaurs and our genealogical tree. — CATARINA SOBRAL (Portugal) is an award-winning illustrator, published internationally and praised by readers and critics all over the world.

— The horizon surrounds us everywhere. Here. There. Further away. Visible or undetectable. Sometimes, distant. Others, so near. Discreet. Silent. Infinite. Hard to grasp. It always seems to escape us and yet... Carolina Celas’s debut album follows the line of the horizon to draw spatial and micro narratives which lead us to a beautiful and poetic graphic tale. — CAROLINA CELAS (Portugal) studied at the Royal College of Art and is an awarded illustrator. Her work explores detail, humour and the surreal. Carolina won the Big Revelation Prize 2017 and a Special Mention at Ilustrarte (Portugal) 2018.

— John is not always confident. Tim is very brave. John likes to make paper boats. Tim wants to command great ships. John and Tim have been friends since the first dream. They spend hours talking. And lose track of time. A poetic story about friendship, trust and the importance of sharing. The imaginary adventures of two friends, John and Tim, who travel together through forests, oceans and icebergs. — MADALENA MONIZ (Portugal) studied Illustration at the Creative Arts School in Bristol. TODAY I FEEL, her ABC of feelings, was awarded a Special Mention by Bologna Ragazzi Award 2015.

— A handful of poems by surrealist writer António José Forte where bicycles are the automobiles of poets and roses are born on the trunk of an elephant. Alice in Wonderland arrives to Rossio riding a crocodile. Pumpkins, magical hats, fleas and mermaids dance around the sparkling illustrations by Mariana Malhão. — MARIANA MALHÃO (Portugal) is an up-and-coming talented illustrator and this is her debut album. Her vibrant colours, inspired by Russian folk art, invite us to the surreal world of these humorous poems about cities, bicycles and butterflies. A perfect match!

— Four 13 to 19 year-old teenagers write in their diaries. At four different times and four unlikely places. Every day brings a new set of concerns, decisions and many, many doubts. CYCLONE is a diary of emotions and a looping into adulthood. This Young Adult illustrated novel tells four different coming of age stories, from the 1970s to the present, connected by the characters’ life-changing moments on the Cyclone, a roller coaster with a curious history and a very dark secret… — Based on the theatre script ROLLER COASTER, written by INÊS BARAHONA and MIGUEL FRAGATA, and now touring national and international stages, CYCLONE is illustrated by up-and-coming Portuguese artist Mariana Malhão.

— A powerful and lyrically intense ABC of feelings by MADALENA MONIZ (Portugal). Each image conveys a strong emotional presence and the moods chosen to represent each letter – Audacious, Beloved, Curious – are often described through a visual metaphor, avoiding traditionally playful approaches to this kind of picture book. Handmade artwork in watercolour paper with ink and watercolour washes. And in the end, we can all play: How are you feeling today? From A to Z.

— Nina likes visiting the jungle city. People once lived here, but the place is now taken over by nature. This is her secret place. Animals bustle about, as Nina comes to tell them stories. Monkeys like adventures in outer space, flamingos are fans of myths and legends. But there is ONE story which is all the animals’ favourite... — JOAN NEGRESCOLOR (Spain) is the illustrator of Hay Clases Sociales, published by Media Vaca and winner of the Non-Fiction Bologna Ragazzi Award 2016. He is also the illustrator of I, Alfonsina, selected for the Bologna Illustrators' exhibition 2020.

— CARMEN CHICA & MARTINA MANYÀ (Spain) create a very experimental picture book full of colours, humour and absurd situations. It all began when the sky turned grey. Too grey! And all the neighbours decided to paint it: red, green, pink, yellow...

— MANUEL MARSOL (Spain) is the winner of Bologna International Illustration Award 2017. Together with Carmen Chica he is the co-writer and illustrator of this tender and poetic story about time, memory and the little things that happen around us.

— This is a story about a girl who lives by the river. Everyday she leaves her home and lays down at the pier looking at the water. One day she falls in love with a little fish, takes him home and builds an amazing world for him. Only to learn that love is about listening and flowing… — CYNTHIA ALONSO (Argentina) is an up-and-coming talent. Her first picture book is a beautifully illustrated silent story that leaves us floating in our own imagination.

— KIRSTEN SIMS (South Africa) first picture book is stunningly drawn in gouache, watercolour, ink and crayon. Her charming scenes and landscapes take us into an imaginary poetic journey of a polar bear looking for a safe place in the planet. Rights sold WORLD SPANISH

— RUI LOPES (Portugal) and RENATA BUENO (Brazil) create a small format book that invites children to a world of humour and invention. Real barcodes are now a cat, a rocket and a zebra. Or a snake that may hide a surprise...

— MY GRANDAD is a small format book on modern times, sprinkled with artistic references from Jacques Tati to Fernando Pessoa.

— Samuel is a little boy (or so he thinks). One day he finds himself transformed into a hippopotamus. Just like that! Blending humour and nonsense, Catarina Sobral’s book is a true metaphor on a child’s growth.

— One day, a researcher came across a new word: ACHIMPA. Nobody knew its meaning or the word class it belonged to. Still, people started using the word and everyone achimped and would achimp forever, if it wasn’t for a linguist who showed up in this story… WHITE RAVENS 2013 SPECIAL MENTION National Illustration Award 2012 Rights sold BRAZIL | CHINA

— Breaking news: dots go on strike! Pointless to say that life becomes chaos. In sports, math classes, museums and tourist spots. No one could understand an iota of what was written. Using monotype and collage, here is Catarina Sobral’s well spirited (first) book!

Books that look and feel good...