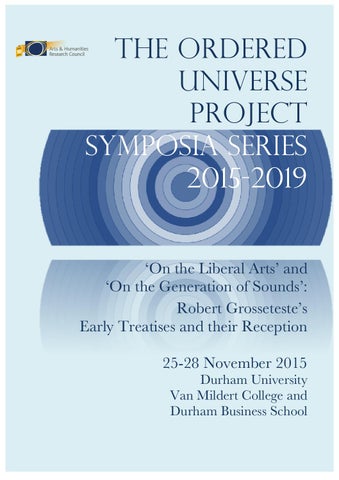 The ordered universe Project Symposia series 2015-2019 ‘On the Liberal Arts’ and ‘On the Generation of Sounds’: Robert Grosseteste’s Early Treatises and their Reception 25-28 November 2015

This is the first of the Ordered Universe symposia under the aegis of the Arts and Humanities Research Council award (of nearly £1million) which provides funding for the project until 2019. The grant started officially on October 15th 2015, and enables the appointment of two post-doctoral research assistantships, nominated in the application and well known to most of you: Dr Sigbjørn Sønnesyn and Dr John Bissell. Sigbjørn will be based at Durham, with primary responsibility for making the primary edition and translation of Grosseteste’s scientific works; John, based in Oxford, will take the lead in formulating the functional analyses of the texts from a modern scientific perspective. Both will draw deeply on the collected wisdom and experience of our wider research team. The existing editions of the De sphaera, the De cometis and the De motu supercelestium by Cecilia Panti are invaluable, as is the work that she and Neil Lewis have carried out on the short but beautifully formed treatise De motu corporali et de luce.

The Ordered Universe began in 2010, with a paper delivered to the then Centre of Medieval and Renaissance Studies, in Durham, by the recently appointed Pro-Vice-Chancellor for Research, Tom McLeish, on what a physicist might make of Grosseteste’s De luce. At the dinner afterwards, the project was born in conversation with Giles Gasper, a medievalist from the History Department. The initial realisation that to investigate Grosseteste’s scientific works required an interdisciplinary forum has been developed as an iterative methodology through the course of some 14 collaborative workshops over the last five years. The collaborative reading process that has evolved remains simple: collaborative reading means that every question is important and every point of view equal, and, mostly, they should at some point make their way to the chair of the session! Our project will take on Grosseteste’s scientific treatises: De artibus liberalibus, De generatione sonoroum, De sphaera, De impressionibus elementorum, De cometis, De luce, De motu supercelestium, De motu corporali et de luce, De diferenciis localibus, De lineis, De natura locorum, De iride (and the De colore), and present them in new editions, translations and multi-disciplinary perspectives.

From Grosseteste much else flows: we will edit and comment on Middle English interpretations of Grosseteste’s science as well as the Latin texts. Academic results will be shared in articles and comment pieces across our respective fields. In a wider context, the Ordered Universe will form part of the award winning Pembroke Access Scheme, bringing a module to young people applying to university; we have a series of public lectures and workshops; we have existing creative partnerships and are creating new ones. Where Grosseteste leads, we will follow. ! ! ! !

The De liberalibus artibus and De generatione sonorum are amongst the earliest, if not the earliest, of Grosseteste’s scientific works. The last Ordered Universe symposium, at Bishop Grosseteste University, organised by Jack Cunningham, focused on both texts. The present symposium will form the final outing for both treatises and the second for the Middle English interpretation. The De liberalibus artibus is generally considered the first of Grosseteste’s writings and sets out a thesis on the identity of arts and their role in correcting human weaknesses. Grammar, Rhetoric and Logic (the Trivium – the Three Subjects), Arithmetic, Geometry, Astronomy and Music (the Quadrivium – the Four Subjects), are the only arts, the only subjects which perform this role. Grosseteste explores various human activities upon which various of the arts act in a corrective manner. Amongst the arts, music and astronomy are given particular prominence in the treatise. The treatise on the liberal arts, of approximately 1724 words, is generally given a date of composition of c. 1200-1215. McEvoy assigns it to the period before c.1209 (against Thomson’s rather more arbitrary decision to place it in the mid-teens of the thirteenth century). Southern concurs, assigning it as an early work within a group composed 1199-1225. Cecilia Panti, in her recent chronological reconstruction, suggests a date closer to 1200 for both the treatise on the liberal arts and on the generation of sounds. The manuscript tradition is, for both treatises, from the later fourteenth to early sixteenth centuries; no earlier copies have been identified. The De artibus is closely related to the De generatione sonorum, in particular the analysis of speech, motion and the vibration of a sounding object struck violently. Where the De generatione seems to show more knowledge of the translation of Aristotle’s De anima by James of Venice (made in the mid-twelfth century), the De artibus shows less. It is plausible, then, to suggest a developing acquaintance with the De anima on Grosseteste’s part, which provoked a re-casting of his thought on the generation of sound. His views on sound would change rather more decisively after his reading of, and commentary on, the Posterior Analytics in the early to mid 1220s. In many ways, the De artibus draws not on new learning, but on that familiar to twelfth-century scholars. The principal authorities for music number Boethius, De institutione musica and Augustine, De musica, especially Book VI. For the other arts, Boethius’s commentary on Cicero’s Topics is a possible source for the remarks on logic, Quintillian’s Institutiones for rhetoric, and Isidore of Seville for grammar. Mathematics is dealt with briefly; astronomy at more length and in integral company with astrology (a position Grosseteste would re-define later in the Hexaemeron, taking the essentially Augustinian line that astrology for prediction is not to be encouraged, but not denying the influence of celestial bodies on sub-lunar motion and behaviour). The astronomical sections involve an alchemical aspect also, and both music and astronomy are invoked as helpful from a medical perspective. ! ! ! !

The De artibus was described by Southern as a meditation and he points to the extended analysis of ‘aspectus’ and ‘affectus’, moving between their astronomical usage where the aspect indicates the situation of a celestial body, the affect the ways in which it influences terrestrial events, and their psychological application. For Grosseteste this means the way in which the mind encounters (aspect) and then fixes and responds to a phenomenon observed (affect). Here again Grosseteste would have been the inheritor of a long literature in the 12th century, and a notable tradition within Benedictine and Cistercian writing, which dwelt on the notion of affectus in a spiritual sense. Grosseteste’s psychological analysis draws heavily on Augustine. For all of this, as McEvoy elegantly expressed it: ‘The beauty of the De artibus consists in its rather breathless economy; for all its traditional flavour, it conveys a sense of excitement and discovery’. Given the consensus on the early date of the treatise, and its commonalities with twelfth-century scholarship, it is the world of late twelfth century Hereford, and the court of William de Vere, that might help to further contextualise Grosseteste’s first works. Lincoln of the same period is also important to examine, and its school which flourished under the guidance of William de Montibus. Grosseteste makes his first appearance in the historical record, probably, as a witness to a charter of Bishop Hugh of Avalon, after 1189 and before 1192, confirming the possessions of the monks of St Andrews in Northampton. It was at Lincoln, presumably, that Gerald of Wales made the acquaintance of the young master Grosseteste and recommended him to William de Vere. Gerald’s letter of recommendation, and the poem to Gerald by Simon du Fresne, a canon of the Cathedral, and scion of a local Herefordshire family from Sutton Freen (about five miles north of the city known today as Sutton St Nicholas) in which he extols Hereford as a centre of the arts, are among the supporting materials for the symposium. Geometry, and astronomy/astrology (along with geomancy) take pride of place. Hereford and the Severn Valley were, throughout the twelfth century, places in which Arabic astronomical texts were copied and their context disseminated. Under William de Vere the episcopal court expanded, and the number of masters employed increased, at the same time as a rise in masters taking up prebendary positions in the Cathedral. It was this world in which Grosseteste first made his mark.

The impact of the De artibus liberalibus is difficult to judge. The manuscript record does not indicate a widely circulated text, as for example the De sphera which exists in over 50 manuscripts. The treatise on the liberal arts was, however, translated into Middle English in the fifteenth century, and forms the basis for a treatise on the seven liberal arts. This exists in a unique manuscript, Cambridge, Trinity College, MS R.14.52. The symposium will also consider this later transmission, and its implications for understanding of Grosseteste’s original.

Two excursus are included in the programme. First, Richard Bower will take us on a guided tour of the Institute of Computational Cosmology and talk about his work on galaxy simulation, the EAGLE project. Second, it is a great pleasure to welcome Dr Nicholas Brown, of Anglia Ruskin University, artist-composer and writer, who presents his vocal performance project on Grosseteste’s On the Generation of Sounds [De generatione sonorum]. This builds on an earlier choral installation piece based on Grosseteste’s On the Operations of the Sun [De operationibus solis]. In addition, Giles Gasper will deliver a public lecture on the world of Robert Grosseteste, with reflections on order, the universe, and Grosseteste’s purposes in writing and thinking. There will also be a display of Grosseteste-related manuscripts from the Cathedral collection in Palace Green Library, including the wondrous A.III.12.

The Creation of the World and the Expulsion from Paradise Giovanni di Paolo (1398-1482, Siena) 1445 Public domain

AM: Arrival of external participants.

Collaborative Reading of the De liberalibus artibus: Part I

A Guided Tour of the Universe

Collaborative Reading of the De generatione sonorum: Part I

On the Generation of Sounds â&amp;#x20AC;&amp;#x201C; Vocal Performance Project

Collaborative Reading of the Seven Liberal Arts: Part I

Review and co-writing of the De generatione sonorum

Review and co-writing of the De artibus liberalibus

Acknowledgements The organisation for this symposium in the Ordered Universe series has been borne by the Durham team, our thanks especially to our Ordered Universe Administrative Assistant Dr Rachael Matthews, Charlotte Imlach from Event Durham for her organisational patience and assistance and to Lisa Di Tommaso, Durham Cathedral Head of Collections and Sarah-Jane Raymond, Durham Cathedral Library for the manuscript display. The symposium takes place under the aegis of the Institute of Medieval and Early Modern Studies at Durham, and its constituent departments. The symposium is the first to take place as part of the AHRC major grant: we are delighted to be supported in this way by the council, and by the Science in Culture theme.

Ordered Universe Symposium: Durham 25th-28th November 2015 'On the Liberal Arts' and 'On the Generation of Sounds': Robert Grosseteste's Early Treatises and their Reception