The Orange County Bar Association - The Briefs May 2022 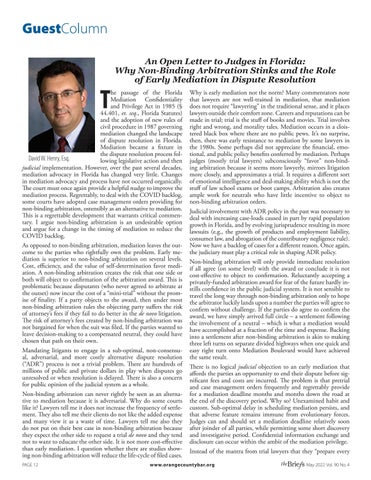 An Open Letter to Judges in Florida: Why Non-Binding Arbitration Stinks and the Role of Early Mediation in Dispute Resolution

he passage of the Florida Mediation Confidentiality and Privilege Act in 1985 (§ 44.401, et. seq., Florida Statutes) and the adoption of new rules of civil procedure in 1987 governing mediation changed the landscape of dispute resolution in Florida. Mediation became a fixture in the dispute resolution process folDavid W. Henry, Esq. lowing legislative action and then judicial implementation. However, over the past several decades, mediation advocacy in Florida has changed very little. Changes in mediation advocacy and process have not occurred organically. The court must once again provide a helpful nudge to improve the mediation process. Regrettably, to deal with the COVID backlog, some courts have adopted case management orders providing for non-binding arbitration, ostensibly as an alternative to mediation. This is a regrettable development that warrants critical commentary. I argue non-binding arbitration is an undesirable option and argue for a change in the timing of mediation to reduce the COVID backlog. As opposed to non-binding arbitration, mediation leaves the outcome to the parties who rightfully own the problem. Early mediation is superior to non-binding arbitration on several levels. Cost, efficiency, and the value of self-determination favor mediation. A non-binding arbitration creates the risk that one side or both will object to confirmation of the arbitration award. This is problematic because disputants (who never agreed to arbitrate at the outset) now incur the cost of a “mini-trial” without the promise of finality. If a party objects to the award, then under most non-binding arbitration rules the objecting party suffers the risk of attorney’s fees if they fail to do better in the de novo litigation. The risk of attorney’s fees created by non-binding arbitration was not bargained for when the suit was filed. If the parties wanted to leave decision-making to a compensated neutral, they could have chosen that path on their own. Mandating litigants to engage in a sub-optimal, non-consensual, adversarial, and more costly alternative dispute resolution (“ADR”) process is not a trivial problem. There are hundreds of millions of public and private dollars in play when disputes go unresolved or when resolution is delayed. There is also a concern for public opinion of the judicial system as a whole. Non-binding arbitration can never rightly be seen as an alternative to mediation because it is adversarial. Why do some courts like it? Lawyers tell me it does not increase the frequency of settlement. They also tell me their clients do not like the added expense and many view it as a waste of time. Lawyers tell me also they do not put on their best case in non-binding arbitration because they expect the other side to request a trial de novo and they tend not to want to educate the other side. It is not more cost-effective than early mediation. I question whether there are studies showing non-binding arbitration will reduce the life-cycle of filed cases. PAGE 12

Why is early mediation not the norm? Many commentators note that lawyers are not well-trained in mediation, that mediation does not require “lawyering” in the traditional sense, and it places lawyers outside their comfort zone. Careers and reputations can be made in trial; trial is the stuff of books and movies. Trial involves right and wrong, and morality tales. Mediation occurs in a cloistered black box where there are no public pews. It’s no surprise, then, there was early resistance to mediation by some lawyers in the 1980s. Some perhaps did not appreciate the financial, emotional, and public policy benefits conferred by mediation. Perhaps judges (mostly trial lawyers) subconsciously “favor” non-binding arbitration because it seems more lawyerly, mirrors litigation more closely, and approximates a trial. It requires a different sort of emotional intelligence and deal-making ability which is not the stuff of law school exams or boot camps. Arbitration also creates ample work for neutrals who have little incentive to object to non-binding arbitration orders. Judicial involvement with ADR policy in the past was necessary to deal with increasing case-loads caused in part by rapid population growth in Florida, and by evolving jurisprudence resulting in more lawsuits (e.g., the growth of products and employment liability, consumer law, and abrogation of the contributory negligence rule). Now we have a backlog of cases for a different reason. Once again, the judiciary must play a critical role in shaping ADR policy. Non-binding arbitration will only provide immediate resolution if all agree (on some level) with the award or conclude it is not cost-effective to object to confirmation. Reluctantly accepting a privately-funded arbitration award for fear of the future hardly instills confidence in the public judicial system. It is not sensible to travel the long way through non-binding arbitration only to hope the arbitrator luckily lands upon a number the parties will agree to confirm without challenge. If the parties do agree to confirm the award, we have simply arrived full circle – a settlement following the involvement of a neutral – which is what a mediation would have accomplished at a fraction of the time and expense. Backing into a settlement after non-binding arbitration is akin to making three left turns on separate divided highways when one quick and easy right turn onto Mediation Boulevard would have achieved the same result. There is no logical judicial objection to an early mediation that affords the parties an opportunity to end their dispute before significant fees and costs are incurred. The problem is that pretrial and case management orders frequently and regrettably provide for a mediation deadline months and months down the road at the end of the discovery period. Why so? Unexamined habit and custom. Sub-optimal delay in scheduling mediation persists, and that adverse feature remains immune from evolutionary forces. Judges can and should set a mediation deadline relatively soon after joinder of all parties, while permitting some short discovery and investigative period. Confidential information exchange and disclosure can occur within the ambit of the mediation privilege. Instead of the mantra from trial lawyers that they “prepare every

The Orange County Bar Association - The Briefs May 2022 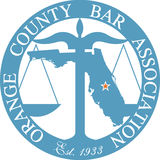