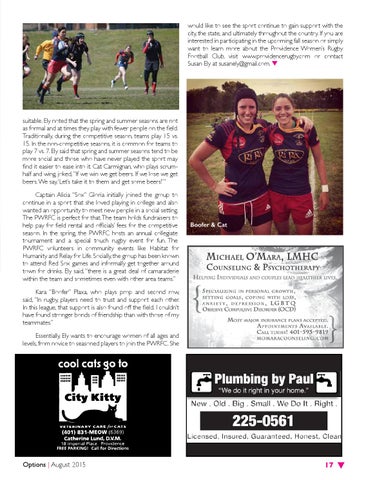 would like to see the sport continue to gain support with the city, the state, and ultimately throughout the country. If you are interested in participating in the upcoming fall season or simply want to learn more about the Providence Women’s Rugby Football Club, visit www.providencerugby.com or contact Susan Ely at susanely@gmail.com. q

suitable. Ely noted that the spring and summer seasons are not as formal and at times they play with fewer people on the field. Traditionally, during the competitive season, teams play 15 vs. 15. In the non-competitive seasons, it is common for teams to play 7 vs. 7. Ely said that spring and summer seasons tend to be more social and those who have never played the sport may find it easier to ease into it. Cat Carmignan, who plays scrumhalf and wing, joked, “If we win we get beers. If we lose we get beers. We say, ‘Let’s take it to them and get some beers!’” Captain Alicia “Sox” Gloria initially joined the group to continue in a sport that she loved playing in college and also wanted an opportunity to meet new people in a social setting. The PWRFC is perfect for that. The team holds fundraisers to help pay for field rental and officials’ fees for the competitive season. In the spring, the PWRFC hosts an annual collegiate tournament and a special touch rugby event for fun. The PWRFC volunteers in community events like Habitat for Humanity and Relay for Life. Socially, the group has been known to attend Red Sox games and informally get together around town for drinks. Ely said, “there is a great deal of camaraderie within the team and sometimes even with other area teams.”

Kara “Boofer” Plaxa, who plays prop and second row, said, “In rugby, players need to trust and support each other. In this league, that support is also found off the field. I couldn’t have found stronger bonds of friendship than with those of my teammates.” Essentially, Ely wants to encourage women of all ages and levels, from novice to seasoned players to join the PWRFC. She 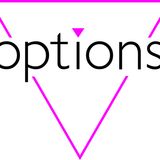