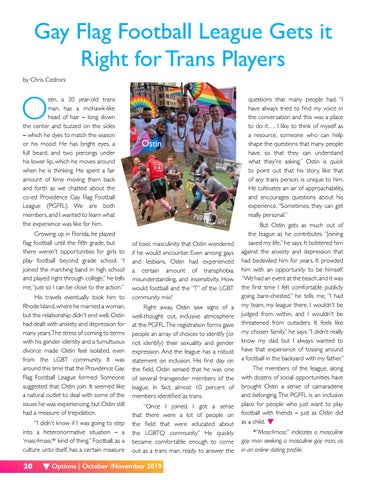 stin, a 30 year-old trans man, has a mohawk-like head of hair – long down the center and buzzed on the sides – which he dyes to match the season or his mood. He has bright eyes, a full beard, and two piercings under his lower lip, which he moves around when he is thinking. He spent a fair amount of time moving them back and forth as we chatted about the co-ed Providence Gay Flag Football League (PGFFL). We are both members, and I wanted to learn what the experience was like for him. Growing up in Florida, he played flag football until the fifth grade, but there weren’t opportunities for girls to play football beyond grade school. “I joined the marching band in high school and played right through college,” he tells me, “just so I can be close to the action.” His travels eventually took him to Rhode Island, where he married a woman, but the relationship didn’t end well. Ostin had dealt with anxiety and depression for many years.The stress of coming to terms with his gender identity and a tumultuous divorce made Ostin feel isolated, even from the LGBT community. It was around this time that the Providence Gay Flag Football League formed. Someone suggested that Ostin join. It seemed like a natural outlet to deal with some of the issues he was experiencing, but Ostin still had a measure of trepidation. “I didn’t know if I was going to step into a heteronormative situation – a ‘masc4masc*’ kind of thing.” Football, as a culture unto itself, has a certain measure

of toxic masculinity that Ostin wondered if he would encounter. Even among gays and lesbians, Ostin had experienced a certain amount of transphobia, misunderstanding, and insensitivity. How would football and the “T” of the LGBT community mix? Right away, Ostin saw signs of a well-thought out, inclusive atmosphere at the PGFFL. The registration forms gave people an array of choices to identify (or not identify) their sexuality and gender expression. And the league has a robust statement on inclusion. His first day on the field, Ostin sensed that he was one of several transgender members of the league. In fact, almost 10 percent of members identified as trans. “Once I joined, I got a sense that there were a lot of people on the field that were educated about the LGBTQ community.” He quickly became comfortable enough to come out as a trans man, ready to answer the

questions that many people had. “I have always tried to find my voice in the conversation and this was a place to do it…. I like to think of myself as a resource, someone who can help shape the questions that many people have, so that they can understand what they're asking.” Ostin is quick to point out that his story, like that of any trans person, is unique to him. He cultivates an air of approachability, and encourages questions about his experience. “Sometimes, they can get really personal.” But Ostin gets as much out of the league as he contributes. “Joining saved my life,” he says. It bolstered him against the anxiety and depression that had bedeviled him for years. It provided him with an opportunity to be himself. “We had an event at the beach, and it was the first time I felt comfortable publicly going bare-chested,” he tells me, “I had my team, my league there. I wouldn’t be judged from within, and I wouldn’t be threatened from outsiders. It feels like my chosen family,” he says. “I didn’t really know my dad, but I always wanted to have that experience of tossing around a football in the backyard with my father.” The members of the league, along with dozens of social opportunities, have brought Ostin a sense of camaraderie and belonging. The PGFFL is an inclusive place for people who just want to play football with friends – just as Ostin did as a child. t *“Masc4masc” indicates a masculine gay man seeking a masculine gay man, as in an online dating profile.