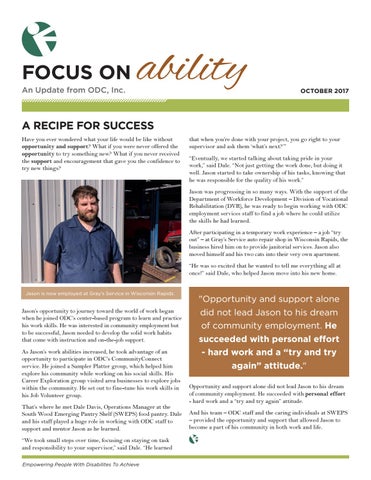 FOCUS ON An Update from ODC, Inc.

A RECIPE FOR SUCCESS Have you ever wondered what your life would be like without opportunity and support? What if you were never offered the opportunity to try something new? What if you never received the support and encouragement that gave you the confidence to try new things?

that when you’re done with your project, you go right to your supervisor and ask them ‘what’s next?’” “Eventually, we started talking about taking pride in your work,” said Dale. “Not just getting the work done, but doing it well. Jason started to take ownership of his tasks, knowing that he was responsible for the quality of his work.” Jason was progressing in so many ways. With the support of the Department of Workforce Development – Division of Vocational Rehabilitation (DVR), he was ready to begin working with ODC employment services staff to find a job where he could utilize the skills he had learned. After participating in a temporary work experience – a job “try out” – at Gray’s Service auto repair shop in Wisconsin Rapids, the business hired him on to provide janitorial services. Jason also moved himself and his two cats into their very own apartment. “He was so excited that he wanted to tell me everything all at once!” said Dale, who helped Jason move into his new home.

Jason is now employed at Gray's Service in Wisconsin Rapids.

Jason’s opportunity to journey toward the world of work began when he joined ODC’s center-based program to learn and practice his work skills. He was interested in community employment but to be successful, Jason needed to develop the solid work habits that come with instruction and on-the-job support. As Jason’s work abilities increased, he took advantage of an opportunity to participate in ODC’s CommunityConnect service. He joined a Sampler Platter group, which helped him explore his community while working on his social skills. His Career Exploration group visited area businesses to explore jobs within the community. He set out to fine-tune his work skills in his Job Volunteer group. That’s where he met Dale Davis, Operations Manager at the South Wood Emerging Pantry Shelf (SWEPS) food pantry. Dale and his staff played a huge role in working with ODC staff to support and mentor Jason as he learned. “We took small steps over time, focusing on staying on task and responsibility to your supervisor,” said Dale. “He learned Empowering People With Disabilites To Achieve 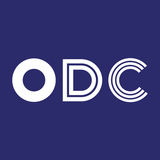 Focus on Ability is a newsletter published by ODC. Our mission is to empower people with disabilities to achieve their work and life goals.

Focus on Ability is a newsletter published by ODC. Our mission is to empower people with disabilities to achieve their work and life goals.