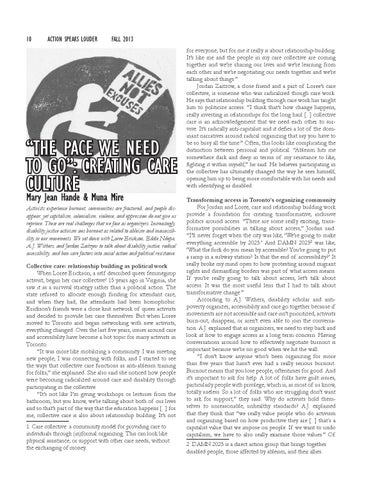 “THE PACE WE NEED TO GO”: CREATING CARE CULTURE Mary Jean Hande & Muna Mire Activists experience burnout, communities are fractured, and people disappear, yet capitalism, colonialism, violence, and oppression do not give us reprieve. These are real challenges that we face as organizers. Increasingly, disability justice activism sees burnout as related to ableism and inaccessibility in our movements. We sat down with Loree Erickson, Eddie Ndopu, A.J. Withers, and Jordan Zaitzow to talk about disability justice, radical accessibility, and how care factors into social action and political resistance. Collective care: relationship building as political work When Loree Erickson, a self described queer femmegimp activist, began her care collective1 15 years ago in Virginia, she saw it as a survival strategy rather than a political action. The state refused to allocate enough funding for attendant care, and when they had, the attendants had been homophobic. Erickson’s friends were a close knit network of queer activists and decided to provide her care themselves. But when Loree moved to Toronto and began networking with new activists, everything changed. Over the last five years, issues around care and accessibility have become a hot topic for many activists in Toronto. “It was more like mobilizing a community. I was meeting new people, I was connecting with folks, and I started to see the ways that collective care functions as anti-ableism training for folks,” she explained. She also said she noticed how people were becoming radicalized around care and disability through participating in the collective. “It’s not like I’m giving workshops or lectures from the bathroom, but you know, we’re talking about both of our lives and so that’s part of the way that the education happens [...] for me, collective care is also about relationship building. It’s not 1. Care collective: a community model for providing care to individuals through (in)formal organizing. This can look like physical assistance, or support with other care needs, without the exchanging of money.

for everyone, but for me it really is about relationship-building. It’s like me and the people in my care collective are coming together and we’re sharing our lives and we’re learning from each other and we’re negotiating our needs together and we’re talking about things.” Jordan Zaitzow, a close friend and a part of Loree’s care collective, is someone who was radicalized though care work. He says that relationship building through care work has taught him to politicize access. “I think that’s how change happens, really investing in relationships for the long haul [...] collective care is an acknowledgement that we need each other to survive. It’s radically anti-capitalist and it defies a lot of the dominant narratives around radical organizing that say you have to be so busy all the time.” Often, this looks like complicating the distinction between personal and political. “Ableism hits me somewhere dark and deep in terms of my resistance to like, fighting it within myself,” he said. He believes participating in the collective has ultimately changed the way he sees himself, opening him up to being more comfortable with his needs and with identifying as disabled. Transforming access in Toronto’s organizing community For Jordan and Loree, care and relationship building work provide a foundation for creating transformative, inclusive politics around access. “There are some really exciting, transformative possibilities in talking about access,” Jordan said. “I’ll never forget when the city was like, ‘We’re going to make everything accessible by 2025.’ And DAMN 20252 was like, ‘What the fuck do you mean by accessible? You’re going to put a ramp in a subway station? Is that the end of accessibility?’ It really broke my mind open to how protesting around migrant rights and dismantling borders was part of what access means. If you’re really going to talk about access, let’s talk about access. It was the most useful lens that I had to talk about transformative change.” According to A.J. Withers, disability scholar and antipoverty organizer, accessibility and care go together because if movements are not accessible and care isn’t prioritized, activists burn-out, disappear, or aren’t even able to join the conversation. A.J. explained that as organizers, we need to step back and look at how to engage access as a long term concern. Having conversations around how to effectively negotiate burnout is important because we’re no good when we hit the wall. “I don’t know anyone who’s been organizing for more than five years that hasn’t ever had a really serious burnout. Burnout means that you lose people, oftentimes for good. And it’s important to ask for help. A lot of folks have guilt issues, particularly people with privilege, which is, as most of us know, totally useless. So a lot of folks who are struggling don’t want to ask for support,” they said. Why do activists hold themselves to unreasonable, unhealthy standards? A.J. explained that they think that “we really value people who do activism and organizing based on how productive they are [...] that's a capitalist value that we impose on people. If we want to undo capitalism, we have to also really examine those values.” Of 2. DAMN 2025 is a direct action group that brings together disabled people, those affected by ableism, and their allies.