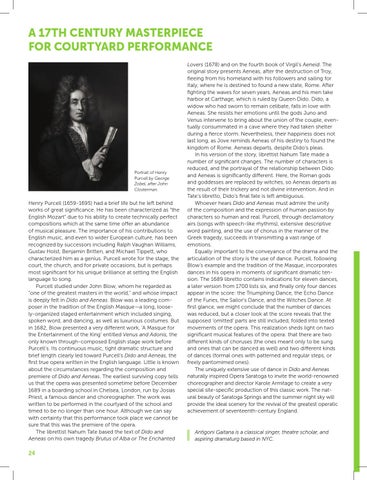 Portrait of Henry Purcell by George Zobel, after John Closterman.

Henry Purcell (1659-1695) had a brief life but he left behind works of great significance. He has been characterized as “the English Mozart” due to his ability to create technically perfect compositions which at the same time offer an abundance of musical pleasure. The importance of his contributions to English music, and even to wider European culture, has been recognized by successors including Ralph Vaughan Williams, Gustav Holst, Benjamin Britten, and Michael Tippett, who characterized him as a genius. Purcell wrote for the stage, the court, the church, and for private occasions, but is perhaps most significant for his unique brilliance at setting the English language to song. Purcell studied under John Blow, whom he regarded as “one of the greatest masters in the world,” and whose impact is deeply felt in Dido and Aeneas. Blow was a leading composer in the tradition of the English Masque—a long, loosely-organized staged entertainment which included singing, spoken word, and dancing, as well as luxurious costumes. But in 1682, Blow presented a very different work, ‘A Masque for the Entertainment of the King’ entitled Venus and Adonis, the only known through-composed English stage work before Purcell’s. Its continuous music, tight dramatic structure and brief length clearly led toward Purcell’s Dido and Aeneas, the first true opera written in the English language. Little is known about the circumstances regarding the composition and premiere of Dido and Aeneas. The earliest surviving copy tells us that the opera was presented sometime before December 1689 in a boarding school in Chelsea, London, run by Josias Priest, a famous dancer and choreographer. The work was written to be performed in the courtyard of the school and timed to be no longer than one hour. Although we can say with certainty that this performance took place we cannot be sure that this was the premiere of the opera. The librettist Nahum Tate based the text of Dido and Aeneas on his own tragedy Brutus of Alba or The Enchanted

Lovers (1678) and on the fourth book of Virgil’s Aeneid. The original story presents Aeneas, after the destruction of Troy, fleeing from his homeland with his followers and sailing for Italy, where he is destined to found a new state, Rome. After fighting the waves for seven years, Aeneas and his men take harbor at Carthage, which is ruled by Queen Dido. Dido, a widow who had sworn to remain celibate, falls in love with Aeneas. She resists her emotions until the gods Juno and Venus intervene to bring about the union of the couple, eventually consummated in a cave where they had taken shelter during a fierce storm. Nevertheless, their happiness does not last long, as Jove reminds Aeneas of his destiny to found the kingdom of Rome. Aeneas departs, despite Dido’s pleas. In his version of the story, librettist Nahum Tate made a number of significant changes. The number of characters is reduced, and the portrayal of the relationship between Dido and Aeneas is significantly different. Here, the Roman gods and goddesses are replaced by witches, so Aeneas departs as the result of their trickery and not divine intervention. And in Tate’s libretto, Dido’s final fate is left ambiguous. Whoever hears Dido and Aeneas must admire the unity of the composition and the expression of human passion by characters so human and real. Purcell, through declamatory airs (songs with speech-like rhythms), extensive descriptive word painting, and the use of chorus in the manner of the Greek tragedy, succeeds in transmitting a vast range of emotions. Equally important to the conveyance of the drama and the articulation of the story is the use of dance. Purcell, following Blow’s example and the tradition of the Masque, incorporates dances in his opera in moments of significant dramatic tension. The 1689 libretto contains indications for eleven dances, a later version from 1700 lists six, and finally only four dances appear in the score: the Triumphing Dance, the Echo Dance of the Furies, the Sailor’s Dance, and the Witches Dance. At first glance, we might conclude that the number of dances was reduced, but a closer look at the score reveals that the supposed ‘omitted’ parts are still included, folded into texted movements of the opera. This realization sheds light on two significant musical features of the opera: that there are two different kinds of choruses (the ones meant only to be sung and ones that can be danced as well) and two different kinds of dances (formal ones with patterned and regular steps, or freely pantomimed ones). The uniquely extensive use of dance in Dido and Aeneas naturally inspired Opera Saratoga to invite the world-renowned choreographer and director Karole Armitage to create a very special site-specific production of this classic work. The natural beauty of Saratoga Springs and the summer night sky will provide the ideal scenery for the revival of the greatest operatic achievement of seventeenth-century England.

Antigoni Gaitana is a classical singer, theatre scholar, and aspiring dramaturg based in NYC.