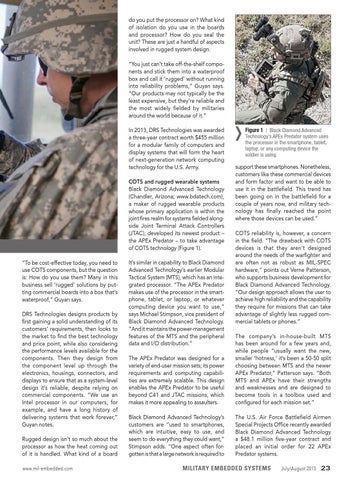 do you put the processor on? What kind of isolation do you use in the boards and processor? How do you seal the unit? These are just a handful of aspects involved in rugged system design. “You just can’t take off-the-shelf components and stick them into a waterproof box and call it ‘rugged’ without running into reliability problems,” Guyan says. “Our products may not typically be the least expensive, but they’re reliable and the most widely fielded by militaries around the world because of it.” In 2013, DRS Technologies was awarded a three-year contract worth $455 million for a modular family of computers and display systems that will form the heart of next-generation network computing technology for the U.S. Army. COTS and rugged wearable systems Black Diamond Advanced Technology (Chandler, Arizona; www.bdatech.com), a maker of rugged wearable products whose primary application is within the joint fires realm for systems fielded alongside Joint Terminal Attack Controllers (JTAC), developed its newest product – the APEx Predator – to take advantage of COTS technology (Figure 1). “To be cost-effective today, you need to use COTS components, but the question is: How do you use them? Many in this business sell ‘rugged’ solutions by putting commercial boards into a box that’s waterproof,” Guyan says. DRS Technologies designs products by first gaining a solid understanding of its customers’ requirements, then looks to the market to find the best technology and price point, while also considering the performance levels available for the components. Then they design from the component level up through the electronics, housings, connectors, and displays to ensure that as a system-level design it’s reliable, despite relying on commercial components. “We use an Intel processor in our computers, for example, and have a long history of delivering systems that work forever,” Guyan notes. Rugged design isn’t so much about the processor as how the heat coming out of it is handled. What kind of a board www.mil-embedded.com

It’s similar in capability to Black Diamond Advanced Technology’s earlier Modular Tactical System (MTS), which has an integrated processor. “The APEx Predator makes use of the processor in the smartphone, tablet, or laptop, or whatever computing device you want to use,” says Michael Stimpson, vice president of Black Diamond Advanced Technology. “And it maintains the power-management features of the MTS and the peripheral data and I/O distribution.”

support these smartphones. Nonetheless, customers like these commercial devices and form factor and want to be able to use it in the battlefield. This trend has been going on in the battlefield for a couple of years now, and military technology has finally reached the point where those devices can be used.” COTS reliability is, however, a concern in the field. “The drawback with COTS devices is that they aren’t designed around the needs of the warfighter and are often not as robust as MIL-SPEC hardware,” points out Verne Patterson, who supports business development for Black Diamond Advanced Technology. “Our design approach allows the user to achieve high reliability and the capability they require for missions that can take advantage of slightly less rugged commercial tablets or phones.”

The APEx Predator was designed for a variety of end-user mission sets; its power requirements and computing capabilities are extremely scalable. This design enables the APEx Predator to be useful beyond C41 and JTAC missions, which makes it more appealing to assaulters.

The company’s in-house-built MTS has been around for a few years and, while people “usually want the new, smaller ‘hotness,’ it’s been a 50-50 split choosing between MTS and the newer APEx Predator,” Patterson says. “Both MTS and APEx have their strengths and weaknesses and are designed to become tools in a toolbox used and ­configured for each mission set.”

Black Diamond Advanced Technology’s customers are “used to smartphones, which are intuitive, easy to use, and seem to do everything they could want,” Stimpson adds. “One aspect often forgotten is that a large network is required to 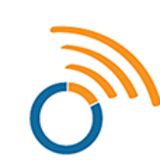