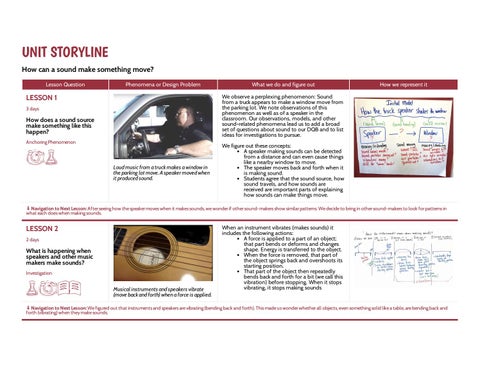 UNIT STORYLINE How can a sound make something move? Lesson Question

We observe a perplexing phenomenon: Sound from a truck appears to make a window move from the parking lot. We note observations of this phenomenon as well as of a speaker in the classroom. Our observations, models, and other sound-related phenomena lead us to add a broad set of questions about sound to our DQB and to list ideas for investigations to pursue.

How does a sound source make something like this happen? Anchoring Phenomenon

Loud music from a truck makes a window in the parking lot move. A speaker moved when it produced sound.

We figure out these concepts: A speaker making sounds can be detected from a distance and can even cause things like a nearby window to move. The speaker moves back and forth when it is making sound. Students agree that the sound source, how sound travels, and how sounds are received are important parts of explaining how sounds can make things move.

What is happening when speakers and other music makers make sounds? Investigation

Musical instruments and speakers vibrate (move back and forth) when a force is applied.

When an instrument vibrates (makes sounds) it includes the following actions: A force is applied to a part of an object; that part bends or deforms and changes shape. Energy is transferred to the object. When the force is removed, that part of the object springs back and overshoots its starting position. That part of the object then repeatedly bends back and forth for a bit (we call this vibration) before stopping. When it stops vibrating, it stops making sounds

All objects move back and forth (vibrate) when making sounds. Objects vibrate further back and forth (deform more) when a greater force is applied, creating louder sounds.

Do all objects vibrate when they make sounds? Problematizing, Investigation

A laser directed at a mirror on a drum, table, and speaker lets us better see the vibrations that happen when those objects make sounds. ⇓ Navigation to Next Lesson: What do we mean by “more” vibrations? Is there a way we can more clearly see how a solid object vibrates more?

How do the vibrations of the sound source compare for louder versus softer sounds?

⇓ Navigation to Next Lesson: We know that pitch is another way sounds are different, and musical instruments have shorter or longer parts that create different pitches, so now we want to make our stick longer or shorter to see how it moves differently to make those different sounds.

We use mathematical representations of Position versus Time graphs generated from a tool used to scale up the vibrations of an object to describe wave patterns and support scientific conclusions about how objects move when they make higherpitch and lower-pitch sounds. We figure out these ideas: Shorter-length bars produce higher-pitch sounds when struck. Shorter-length bars vibrate more frequently than longer-length bars when struck. Sound sources that produce higher-pitch notes vibrate more frequently.

How do the vibrations from a sound source compare for higher-pitch versus lowerpitch sounds? Investigation

A shorter stick vibrates faster than the longer stick, and the graph of the motion of the speaker also shows faster vibrations for higher pitch.

⇓ Navigation to Next Lesson: We figured out that a shorter stick vibrates faster than a longer one and the speaker vibrates faster for higher-pitch sounds. This made us wonder if we can put our ideas about frequency and amplitude together to see if we can explain how any object can make so many different sounds.

We apply our understanding to explain different sounds coming from different objects, complete a summative mid-unit assessment, and return to our DQB.

How can any object make so many different sounds? Putting Pieces Together

A video and graphs of the motion of a harp making sounds are used to model and argue for the different sounds being made. ⇓ Navigation to Next Lesson: We have answered many of our questions about what is happening at the sound source when it makes different sounds, but we still have many questions about how that sound is actually traveling and what happens at the receiver.

We test the idea that the air from the sound source is traveling to the window or our ears by placing a sound source in an airtight container and testing whether we can still hear it. We also record the mass of the container before and after the sound is produced. We use the understandings we gain from these investigations to revisit our initial models to analyze our earlier claims for what’s traveling between the speaker and the window in the anchoring video.

What is actually moving from the sound source to the window? Problematizing, Investigation

By placing a sound maker in a sealed container, we observe that we can still hear sounds coming from inside and that the mass of the container does not change before and after sounds are played.

⇓ Navigation to Next Lesson: After seeing evidence that air doesn’t move from the sound source to the receiver, we wonder if air is even necessary for sound to travel.

Do we need air to hear sound?

Sound can travel through all different kinds of matter (solids, liquids, and gasses), not just air. Sound cannot travel through an empty space with no matter; sound needs matter to travel.

When a sound source is placed in a solid container with liquid or gas inside, we hear sounds coming from inside. When it is placed in a container with no matter inside, we do not hear any sounds coming from inside. ⇓ Navigation to Next Lesson: We know that sound needs matter to travel, but we don’t know yet how to represent sound going through matter. We decide we need to make models to see how matter allows sounds to travel to our ears.

We recall that models of all states of matter have particles, empty space, and motion. We simulate what happens in the surrounding matter as a vibrating object is interacting with it. This model suggests that motion (or energy) might be transferred through the medium from one end to another through particle collisions.

How can we model sound traveling through a solid, liquid, or gas? Investigation

We use our bodies to simulate a sound source hitting a particle, causing it to collide into the particle next to it, transferring energy to the next particle and so on.

⇓ Navigation to Next Lesson: We figured out that particles collide into one another as sound moves through a medium. This made us wonder if we could better see the interactions among particles by using a computer simulation that shows more particles, repeated vibrations of particles, and vibrations of different amplitude and frequencies.

What exactly is traveling across the medium? Investigation

Vibrations of a sound source cause particle bands to push against the particles next to them, creating dark and light bands where there are areas of densely and loosely packed particles.

We manipulate a computer simulation by changing either the pitch or loudness of the sound produced to see how the motion of the particles in the medium is affected. We figure out these ideas: When an object moves back and forth, it produces bands of compressed and expanded particles that move through the medium (bands of compression travel, but particles do not). The density of particle compression gets greater when the amplitude of vibration at the sound source increases. The distance between compression bands appears to change when we change the frequency of vibration. Collisions between the particles in the medium result in compression bands moving away from a sound source. Collisions transfer energy across the medium.

⇓ Navigation to Next Lesson: We figured out that vibrating objects produce bands of compressed particles in the medium in which the sound is traveling. The particles do not travel from the sound source to the sound detector but collide with the particles next to them, transferring energy through the medium. This makes us wonder if we can use our model to explain other sound phenomena.

We develop a model to explain a new phenomenon: salt jumping on plastic wrap when a drum is hit. We develop a checklist that includes the key ideas we have developed about how sounds are caused and how sound can cause other things to move. Then, we apply that checklist to revising the model that explains why a window near the parking lot moved when a truck speaker was blasting music.

How does sound make matter around us move? Putting Pieces Together

Salt on plastic wrap stretched over a bowl jumps up and down when a drum nearby is hit. ⇓ Navigation to Next Lesson: We have a good idea about how sound travels, but we still have a lot of questions about how we actually hear things and what is happening at the sound receiver. We’ve heard that there’s a body part called the eardrum, so we wonder how that might fit in with what we already know about sound.

In order to find answers to their questions about how our ears detect sounds, students read an interview with experts and watch several videos and animations about the structures of the ear and how hearing loss can occur. They synthesize that information to annotate a model showing how energy is transferred through the parts of the ear to the nerve cells that send signals to the brain.

What goes on in people’s ears so they can detect certain sounds? Investigation

An otoscope video of an eardrum examination, an animated diagram, and a reading show the structures in the ear canal and vibrations entering the inner ear. ⇓ Navigation to Next Lesson: Since we’ve learned that both loud sounds (high-amplitude waves) and high-pitched sounds (high-frequency waves) can damage our ears, we want to know which is worse. So, we want to investigate which type of sound wave (higher amplitude or higher frequency) transfers more energy.

We conduct two investigations to measure “What transfers more energy, waves of bigger amplitude or waves of greater frequency?” First, we change how many times a marker representing the sound detector is hit by marbles in a given time period (the frequency) and measure the total distance the marker moved (the amount of energy transferred to the detector). Next, we change the force acting upon the marbles (changing the amplitude) and measure how this changes the distance the marker moves.

A ruler (representing a vibrating object) pushes marbles (representing nearby particles) with greater energy when we increase the amplitude or frequency of the ruler’s vibrations. Increasing amplitude has a proportionally greater effect on energy transfer than increasing frequency.

We revisit the Driving Question Board and discuss all of our questions that we have now answered. Then we demonstrate our understanding by individually taking an assessment. Finally, we reflect on our experiences in the unit.

How can we explain our anchoring phenomenon, and which of our questions can we now answer? Putting Pieces Together

Hitting a cymbal loudly can damage a musician’s ears. This summary document describes the storyline for the OpenSciED unit 8.2 Sound Waves. For more information and access to download the unit f...

This summary document describes the storyline for the OpenSciED unit 8.2 Sound Waves. For more information and access to download the unit f...