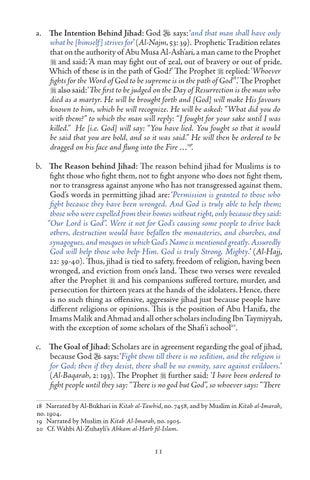 a. The Intention Behind Jihad: God says: ‘and that man shall have only what he [himself] strives for’ (Al-Najm, 53: 39). Prophetic Tradition relates that on the authority of Abu Musa Al-Ash’ari, a man came to the Prophet and said: ‘A man may fight out of zeal, out of bravery or out of pride. Which of these is in the path of God?’ The Prophet replied: ‘Whoever fights for the Word of God to be supreme is in the path of God18.’ The Prophet also said: ‘The first to be judged on the Day of Resurrection is the man who died as a martyr. He will be brought forth and [God] will make His favours known to him, which he will recognize. He will be asked: “What did you do with them?” to which the man will reply: “I fought for your sake until I was killed.” He [i.e. God] will say: “You have lied. You fought so that it would be said that you are bold, and so it was said.” He will then be ordered to be dragged on his face and flung into the Fire …19’. b. The Reason behind Jihad: The reason behind jihad for Muslims is to fight those who fight them, not to fight anyone who does not fight them, nor to transgress against anyone who has not transgressed against them. God’s words in permitting jihad are: ‘Permission is granted to those who fight because they have been wronged. And God is truly able to help them; those who were expelled from their homes without right, only because they said: “Our Lord is God”. Were it not for God&#39;s causing some people to drive back others, destruction would have befallen the monasteries, and churches, and synagogues, and mosques in which God&#39;s Name is mentioned greatly. Assuredly God will help those who help Him. God is truly Strong, Mighty.’ (Al-Hajj, 22: 39-40). Thus, jihad is tied to safety, freedom of religion, having been wronged, and eviction from one’s land. These two verses were revealed after the Prophet and his companions suffered torture, murder, and persecution for thirteen years at the hands of the idolaters. Hence, there is no such thing as offensive, aggressive jihad just because people have different religions or opinions. This is the position of Abu Hanifa, the Imams Malik and Ahmad and all other scholars including Ibn Taymiyyah, with the exception of some scholars of the Shafi’i school20. c. The Goal of Jihad: Scholars are in agreement regarding the goal of jihad, because God says: ‘Fight them till there is no sedition, and the religion is for God; then if they desist, there shall be no enmity, save against evildoers.’ (Al-Baqarah, 2: 193). The Prophet further said: ‘I have been ordered to fight people until they say: “There is no god but God”, so whoever says: “There 18 Narrated by Al-Bukhari in Kitab al-Tawhid, no. 7458, and by Muslim in Kitab al-Imarah, no. 1904. 19 Narrated by Muslim in Kitab Al-Imarah, no. 1905. 20 Cf. Wahbi Al-Zuhayli’s Ahkam al-Harb fil-Islam. 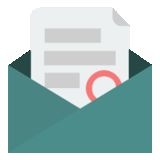