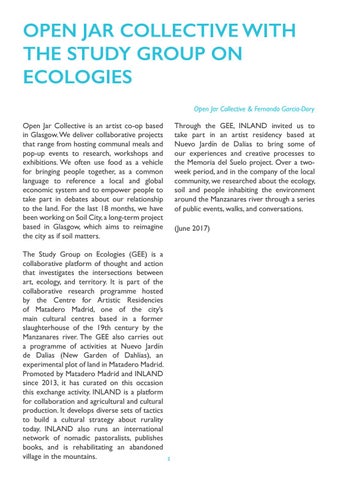 Open Jar Collective is an artist co-op based in Glasgow. We deliver collaborative projects that range from hosting communal meals and pop-up events to research, workshops and exhibitions. We often use food as a vehicle for bringing people together, as a common language to reference a local and global economic system and to empower people to take part in debates about our relationship to the land. For the last 18 months, we have been working on Soil City, a long-term project based in Glasgow, which aims to reimagine the city as if soil matters. The Study Group on Ecologies (GEE) is a collaborative platform of thought and action that investigates the intersections between art, ecology, and territory. It is part of the collaborative research programme hosted by the Centre for Artistic Residencies of Matadero Madrid, one of the city’s main cultural centres based in a former slaughterhouse of the 19th century by the Manzanares river. The GEE also carries out a programme of activities at Nuevo Jardín de Dalias (New Garden of Dahlias), an experimental plot of land in Matadero Madrid. Promoted by Matadero Madrid and INLAND since 2013, it has curated on this occasion this exchange activity. INLAND is a platform for collaboration and agricultural and cultural production. It develops diverse sets of tactics to build a cultural strategy about rurality today. INLAND also runs an international network of nomadic pastoralists, publishes books, and is rehabilitating an abandoned village in the mountains.

Through the GEE, INLAND invited us to take part in an artist residency based at Nuevo Jardín de Dalias to bring some of our experiences and creative processes to the Memoria del Suelo project. Over a twoweek period, and in the company of the local community, we researched about the ecology, soil and people inhabiting the environment around the Manzanares river through a series of public events, walks, and conversations. (June 2017) 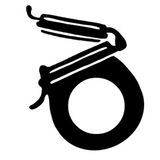 Publication produced after a residency of the Open Jar Collective at Matadero Madrid in June 2017.

Publication produced after a residency of the Open Jar Collective at Matadero Madrid in June 2017.