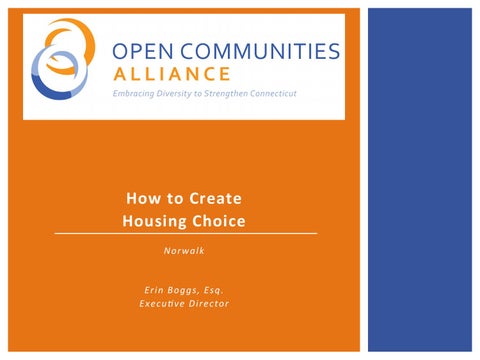 CT IS ONE OF THE MOST RACIALLY, ETHNICALLY, AND ECONOMICALLY SEGREGATED STATES IN THE COUNTRY.

CONNECTICUT BY THE NUMBERS: EDUCATION Connec8cut is home to some of the most severe dispari8es in school performance between White children and La8no and Black children in the na8on.

CONNECTICUT BY THE NUMBERS: UNEMPLOYMENT Connec8cut has some of the widest gaps in unemployment rates by race and ethnicity in the country.

CONNECTICUT BY THE NUMBERS: HEALTH Starkly diﬀerent health outcomes for Black and La8nos and Whites are longstanding and cut across health indicators.

CONNECTICUT BY THE NUMBERS: INCOME DISPARITY Race and income are almost inextricably intertwined and the income gap between the rich and poor is growing in Connec8cut. Since the 1970s, Connec8cut has experienced the greatest increase in the income disparity between the top 20% and boiom 20% of income earners in the na8on.

ACCESS TO OPPORTUNITY 50 years of social science research demonstrates that where we live dictates the opportuni8es we have access to such as thriving schools, safe neighborhoods and social networks that lead to jobs. john powell, of Berkeley and his colleagues have developed a system to measure opportunity.

WHERE DO WE LIVE? OPPORTUNITY BY RACE AND ETHNICITY IN CT

BIG PICTURE SOLUTIONS: ¡ B ring resources to areas that are struggling. §  This has been happening for years, but we can do it beier.

¡ L ink people in groups that have been isolated from opportunity to higher opportunity areas. Through: §  Housing §  Educa8on §  Transporta8on

% of Units in Dispropor8onately Minority Areas

% of Units in High Poverty Areas

% of Units in RCAP Areas

The Preserva8on List is the most comprehensive list available of the subsidized housing stock in Connec8cut, but it does not include the en8re inventory. For example, the number of units of suppor8ve housing listed above represents only a frac8on of the actual total.

The Preserva8on List does not include every unit of subsidized housing in the state, but it is the most comprehensive list available. 26

100% of areas that were redlined in 1937 are very low opportunity areas today.

For over 75 years eﬀorts to help struggling neighborhoods have focused on adding more low income housing to low income areas. It is 8me for a new strategy.

THE POVERTY IMPACT ¡  As of the 2000 census, 40% of families in Asylum Hill are living in poverty. ¡  Urban Studies Professor George Galster of Wayne State University has found: &quot;My review of the U.S. literature suggests that the independent impacts of neighborhood poverty rates in encouraging nega8ve outcomes for individuals like crime, school leaving, and dura8on of poverty spells appear to be nil unless the neighborhood exceeds about 20 percent poverty, whereupon the externality eﬀects grow rapidly un8l the neighborhood reaches approximately 40 percent poverty; subsequent increases in the poverty popula8on appear to have no marginal external eﬀect.&quot; 36

WAYS TO PARTNER ¡  Can we work to iden8fy and create funding resources that support revitalizing struggling areas while ensuring aﬀordable housing for families who love this community and want to stay? ¡  Can we ﬁnd a way to reach low-­‐income residents interested in moving? ¡  Can we work together to promote statewide policies that ensure that every town in Connec8cut takes on its fair share of aﬀordable housing?