UK actions against Islamic State in Iraq and Syria 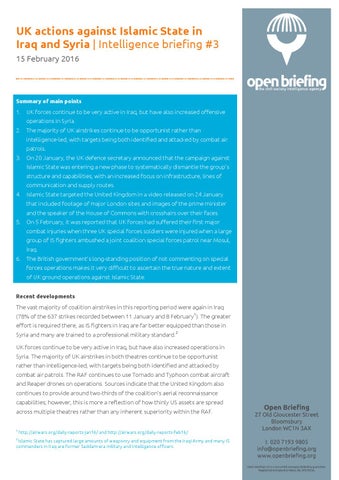 Summary of main points 1. UK forces continue to be very active in Iraq, but have also increased offensive operations in Syria. 2.

The majority of UK airstrikes continue to be opportunist rather than intelligence-led, with targets being both identified and attacked by combat air patrols.

On 20 January, the UK defence secretary announced that the campaign against Islamic State was entering a new phase to systematically dismantle the groupâ&amp;#x20AC;&amp;#x2122;s structure and capabilities, with an increased focus on infrastructure, lines of communication and supply routes.

Islamic State targeted the United Kingdom in a video released on 24 January that included footage of major London sites and images of the prime minister and the speaker of the House of Commons with crosshairs over their faces.

On 5 February, it was reported that UK forces had suffered their first major combat injuries when three UK special forces soldiers were injured when a large group of IS fighters ambushed a joint coalition special forces patrol near Mosul, Iraq.

The British governmentâ&amp;#x20AC;&amp;#x2122;s long-standing position of not commenting on special forces operations makes it very difficult to ascertain the true nature and extent of UK ground operations against Islamic State.

(78% of the 637 strikes recorded between 11 January and 8 February ). The greater effort is required there, as IS fighters in Iraq are far better equipped than those in Syria and many are trained to a professional military standard.

UK forces continue to be very active in Iraq, but have also increased operations in Syria. The majority of UK airstrikes in both theatres continue to be opportunist rather than intelligence-led, with targets being both identified and attacked by combat air patrols. The RAF continues to use Tornado and Typhoon combat aircraft and Reaper drones on operations. Sources indicate that the United Kingdom also continues to provide around two-thirds of the coalitionâ&amp;#x20AC;&amp;#x2122;s aerial reconnaissance capabilities; however, this is more a reflection of how thinly US assets are spread across multiple theatres rather than any inherent superiority within the RAF.

Islamic State has captured large amounts of weaponry and equipment from the Iraqi Army and many IS commanders in Iraq are former Saddam-era military and intelligence officers.

In central Iraq, coalition operations continue on the Haditha-Ramadi-Fallujah corridor. In Kurdishcontrolled Iraq, the RAF continues to support Peshmerga forces around Kirkuk, destroying a major command centre in the city. In northern Iraq, UK assets continued to support Iraqi troops on the primary Mosul-Kisik-Sinjar corridor, and the RAF have repeatedly targeted the IS security headquarters in Mosul. Local media report that a coalition airstrike in northern Iraq killed a senior IS commander, Saudi-born Shobaib Abu Majd al-Kanani, on 6 February.

On 5 February, the Mirror newspaper reported that UK forces had suffered their first major combat injuries when three UK servicemen from the SAS and SBS were injured when a large group of IS fighters 4

ambushed a British, German and US special forces patrol near Mosul. The joint patrol was reportedly aiming to identify IS positions outside Mosul and spot weak areas in the group&#39;s defences. The British governmentâ&amp;#x20AC;&amp;#x2122;s long-standing position of not commenting on special forces operations makes it very difficult to ascertain the true nature and extent of UK ground operations against Islamic State. In Syria, the US-led coalition, including UK forces, continues to target construction equipment in order to hamper IS efforts to repair recent strikes on the vital wellheads of the Omar oilfield. Coalition forces also continue to target Raqqa, the main IS stronghold in Syria. In this reporting period (14 January to 8 February), UK forces have destroyed 38 IS combat positions, 18 ISheld buildings (including command centres and underground complexes), 21 vehicles, five ammunition stores, two anti-aircraft units, nine mortar units, seven heavy machine gun units, four RPG units, three large vehicle-borne IEDs under construction and one sniper unit. See Appendix 1 for a full chronology and a situation map of the known UK airstrikes against Islamic State in Iraq and Syria during this reporting period. The Iraqi army and Kurdish Peshmerga have made many advances against Islamic State in Iraq in recent months. Mosul remains the primary target. Islamic State reportedly executed 300 civilians in the city over 5

the first week of February. On 8 February, the Iraqi army announced it was mobilising 4,500 troops to retake Mosul, which is still Islamic Stateâ&amp;#x20AC;&amp;#x2122;s stronghold in the country. The short-term objective is to cut off supply lines from Mosul to other areas before conducting a ground offensive against the city, though this is not expected until late 2016 at the earliest. In contrast, ground operations in Syria are more limited. Operations there are mainly conducted by progovernment forces and supported by Russian airstrikes, with the targets varying widely from known IS locations to other terrorist groups and rebel forces. It has also been alleged that Russian special forces, 6

predominately from the Chechen region, are assisting on the ground in Syria. Without the rapid training and equipping of opposition and Kurdish forces, ground operations supported by the US-led coalition will inevitably be less effective. In a report published on 3 February, the UN Human Rights Council found that both Syrian government forces and Islamic State have committed war crimes and crimes against humanity 7

and that other terrorist groups and anti-Assad forces have committed war crimes.

Suffering blows in Iraq and Syria, Islamic State has continued to issue warnings to members of both the Russia-led and US-led coalitions. On 8 February, the Russian FSB claimed to have arrested seven members of Islamic State in Ekaterinburg, Siberia. Investigators found explosives at properties linked to the group, and the FSB claims to have evidence that they were planning attacks in Ekaterinburg, Moscow and St. Petersburg. Some members of the group were Russian nationals thought to have returned from Syria. Islamic State targeted the United Kingdom in a video released on 24 January that included footage of major London sites and images of the prime minister, David Cameron, and the speaker of the House of 8

Commons, John Bercow, with crosshairs over their faces. The video also claims to show the nine Paris attackers carrying out beheadings and training in Iraq and Syria some time before the November 2015 attack. In response to the spread of IS propaganda on social media, Twitter announced on 5 February that since mid-2015 it has shut down 125,000 accounts for threatening or promoting terrorist acts, primarily related 9

to Islamic State. This is part of the company’s wider strategy to combat extremism online. Coalition strategy The coalition strategy against Islamic State in Iraq and Syria has remained the same: to target the main Islamic State (IS) strongholds and deny them support from other IS forces, and to assist ground operations being conducted by friendly forces in the two theatres. However, at a conference in Paris on 20 January, in which European and US representatives met to discuss Islamic State, the UK defence secretary, Michael Fallon, said ‘Now the campaign is moving into a new phase where we aim to systematically dismantle Daesh’s structure and capabilities… That means striking harder at the head of the snake, with an increased focus on infrastructure, lines of communication and supply routes.’

The coalition knows that it must go beyond targeting IS strongholds and fighters. The drive to undermine the pseudo-state that Islamic State is creating in Syria in particular is central to ultimately defeating the group. A Western intelligence report from January 2015 indicates that Islamic State requires an annual 11

comparison, Open Briefing estimates that Islamic State has an annual income of $2 to $3 billion. Undermining the finances of Islamic State is therefore considered vital to defeating them.

Oils sales are a major source of income for Islamic State (though less significant than in the past), and the refineries it controls are primary targets for coalition forces. During this reporting period, coalition forces have concentrated on bombing the Omar oilfield in Syria in order to prevent the repair of the wellheads previously destroyed in coalition airstrikes. These raids have included UK forces on two known occasions: 14 and 24 January. Another regular target is construction vehicles and smuggling routes. However, the majority of Islamic State’s income is thought to now come from levying taxes and fines within the territory it controls and from taxing drug trafficking from Afghanistan through its territory.

On 2 February, coalition representatives from 23 countries met in Rome to discuss the conflict. The US secretary of state, John Kerry, claimed that over the last six months Islamic State had lost 40% of its Iraqi territory and 20% of its Syrian territory. Kerry also said ‘we have interrupted their finance mechanisms, 14

they have had to cut the salaries of their fighters, we have interrupted their capacity to get revenues’.

Mosul – One mortar unit and a patrol vehicle destroyed; one compound of three targeted buildings destroyed.

Raqqa – One IS barracks and one vehicle destroyed.

Iraq Ramadi - Two IS buildings, one IS group, an armoured personnel carrier being converted into a VBIED and a stockpile of explosives destroyed.

Ramadi – One command centre, one antiaircraft gun and one ammunition store destroyed. 24 Jan

Sinjar – One mortar team and one sniper team destroyed.

Habbaniyah – Close air support with Iraqi troops; one IS assault group attacked. Between Al-Qayyarah and Mosul – One vehicle destroyed. Habbaniyah – Four IS positions destroyed, including one heavy machine gun unit.

Mosul – One IS ground unit and one weapons store destroyed. Ramadi – One armoured truck and one mechanical excavator destroyed.

Ramadi – One truck bomb, three IS positions, including one heavy machine gun unit, destroyed. Northern Iraq – One IS group and one ISheld building destroyed. Kisik – Three rocket launching units and one vehicle destroyed.

Figure 1. Locations of known UK airstrikes against Islamic State in Iraq and Syria (11 January to 8 February 2016).

Open Briefing is the worldâ&amp;#x20AC;&amp;#x2122;s first civil society intelligence agency. We are a unique international collaboration of intelligence, military, law enforcement and government professionals working tirelessly behind the scenes to make a difference. We provide intelligence, security and training to organisations striving to make the world a better place. We scrutinise the actions of governments and militaries and generate alternative policies. We deliver a public intelligence service so that you know what is really going on in the world. Founded in 2011, Open Briefing is a groundbreaking non-profit social enterprise supported by volunteers. We take no government or corporate funding and rely on charitable grants and public donations. We are your intelligence agency. www.openbriefing.org

UK actions against Islamic State in Iraq and Syria

Briefing on developments in Iraq and Syria during December 2015 and January 2016.