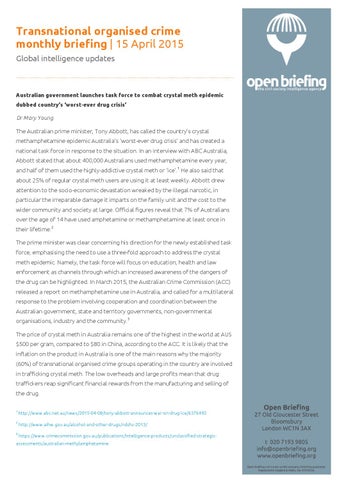 and half of them used the highly-addictive crystal meth or ‘ice’. He also said that about 25% of regular crystal meth users are using it at least weekly. Abbott drew attention to the socio-economic devastation wreaked by the illegal narcotic, in particular the irreparable damage it imparts on the family unit and the cost to the wider community and society at large. Official figures reveal that 7% of Australians over the age of 14 have used amphetamine or methamphetamine at least once in 2

The prime minister was clear concerning his direction for the newly established task force, emphasising the need to use a three-fold approach to address the crystal meth epidemic. Namely, the task force will focus on education, health and law enforcement as channels through which an increased awareness of the dangers of the drug can be highlighted. In March 2015, the Australian Crime Commission (ACC) released a report on methamphetamine use in Australia, and called for a multilateral response to the problem involving cooperation and coordination between the Australian government, state and territory governments, non-governmental 3

organisations, industry and the community.

The price of crystal meth in Australia remains one of the highest in the world at AUS $500 per gram, compared to $80 in China, according to the ACC. It is likely that the inflation on the product in Australia is one of the main reasons why the majority (60%) of transnational organised crime groups operating in the country are involved in trafficking crystal meth. The low overheads and large profits mean that drug traffickers reap significant financial rewards from the manufacturing and selling of the drug. 1

Despite the focus within Australia on outlaw motorcycle gangs, it is probable that most of Australia’s crystal meth comes from the Lufeng district on the southern Chinese border, just 200 kilometres east of Hong Kong. Lufeng houses some of the country’s most prolific synthetic drug manufacturers. Such is the importance of the illegal drug trade to the economies of some villages in this part of China that residents with assault rifles and grenades reportedly guard some villages. With the initiation of the Australian task force, it is highly likely that such villages in southern China will come under increasing international scrutiny and that the Chinese Communist Party will be forced to respond and adopt a tougher stance on combating the widespread corruption that is facilitating the mushrooming illegal narcotics trade. Other developments Calls for the Indonesian government to label illegal, unreported and unregulated (IUU) fishing a transnational organised crime (TOC) may help create the legal regime necessary to combat IUU 4

fishing in the region according to a report in the Jakarta Post. Thirty per cent of the world’s IUU fishing occurs in Indonesia’s jurisdiction, and by recognising it as a transnational organised crime, Indonesia could become a pioneer in pushing forward the international agenda on this issue. Although it could be initially problematic given the varying definitions of a TOC, IUU fishing meets all the specific requirements of a TOC under Articles 2 and 3 of the UN Convention on Transnational Organised Crimes (UNTOC): IUU fishing is transnational (it crosses multiple territorial boundaries) and involves an organised criminal group. It could be reasonably assumed that categorising IUU fishing as a transnational organised crime within the framework of the UNTOC would create a binding authority on states to respond to the problem on unilateral, bilateral and multilateral levels. El Salvador is struggling to cope with the collapse of the February 2012 truce between the country’s largest street gangs, MS-13 and Calle 18. Four hundred and eighty one people have so far died as a result. With an average of 16 people murdered every day in El Salvador throughout March, it was the country’s most-deadly month in a decade. The Salvadoran authorities are quick to blame the insecurity on the MS-13 and Calle 18 gangs. However, international drug traffickers and transnational organised criminals have also played a part by manipulating El Salvador’s weak political and law enforcement institutions and taking advantage of the high levels of corruption that exist. In recognition of the threats posed by maritime organised crime, 21 countries from Europe, the Americas and Africa took part in Exercise Obangame Express in the Gulf of Guinea in March. Focusing on counter-piracy and maritime security operations, the annual at-sea multilateral maritime exercise is sponsored by US Africa Command (US AFRICOM). The exercise seeks to leverage the Code of Conduct for West and Central Africa, which provides a regional framework for cooperation and information sharing on anti-piracy matters. Through enhanced cooperation, detection capabilities and response capability, Gulf of Guinea countries hope to ensure that they are able to tackle various maritime challenges, including deterring drugs traffickers, protecting the fishery trade, safeguarding waters from piracy, and allowing global trade to continue unimpeded.

A Colombian academic has analysed how criminal insurgents exploit transnational networks of insurgency and crime in an attempt to entrench militants beyond the borders of a single state. In his article for Small Wars &amp; Insurgencies, Oscar Palma states that the resulting political, military and criminal activities ‘provide an opportunity for the insurgency to survive when the counterinsurgent offensive is strong within the primary theatre.’

US President Barack Obama met with Caribbean leaders in a summit between the Caribbean Community (CARICOM) and the United States in Kingston, Jamaica, on 9 April. At the summit ahead of the OAS Summit of the Americas in Panama, the president of Haiti, Michel Martelly, drew attention to the increasing challenges posed by transnational organised crime in the Caribbean. In particular, Martelly reiterated his country’s commitment to fighting drug trafficking, money laundering activities, human trafficking, light weapons and cyber crime.