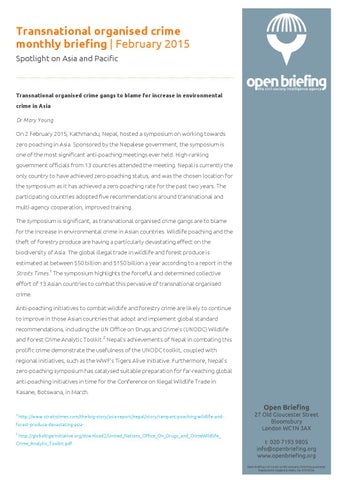 Transnational organised crime gangs to blame for increase in environmental crime in Asia Dr Mary Young On 2 February 2015, Kathmandu, Nepal, hosted a symposium on working towards zero poaching in Asia. Sponsored by the Nepalese government, the symposium is one of the most significant anti-poaching meetings ever held. High-ranking government officials from 13 countries attended the meeting. Nepal is currently the only country to have achieved zero-poaching status, and was the chosen location for the symposium as it has achieved a zero-poaching rate for the past two years. The participating countries adopted five recommendations around transnational and multi-agency cooperation, improved training. The symposium is significant, as transnational organised crime gangs are to blame for the increase in environmental crime in Asian countries. Wildlife poaching and the theft of forestry produce are having a particularly devastating effect on the biodiversity of Asia. The global illegal trade in wildlife and forest produce is estimated at between $50 billion and $150 billion a year according to a report in the 1

Straits Times. The symposium highlights the forceful and determined collective effort of 13 Asian countries to combat this pervasive of transnational organised crime. Anti-poaching initiatives to combat wildlife and forestry crime are likely to continue to improve in those Asian countries that adopt and implement global standard recommendations, including the UN Office on Drugs and Crime’s (UNODC) Wildlife 2

and Forest Crime Analytic Toolkit. Nepal’s achievements of Nepal in combating this prolific crime demonstrate the usefulness of the UNODC toolkit, coupled with regional initiatives, such as the WWF’s Tigers Alive Initiative. Furthermore, Nepal’s zero-poaching symposium has catalysed suitable preparation for far-reaching global anti-poaching initiatives in time for the Conference on Illegal Wildlife Trade in Kasane, Botswana, in March.

Other developments The executive director of the UN Office on Drugs and Crime (UNODC), Yury Fedotov, met with Fiji’s President Epeli Nailatikau to discuss cooperation against drugs, crime, corruption and terrorism in the Pacific region. The meeting, which took place in October 2014, saw Fedotov reaffirm the UNODC’s commitment to Fiji and the wider Pacific. Crucially, the UNODC’s regional programme for Southeast Asia and the Pacific will continue to support the efforts of the Pacific island communities in the fight against transnational organised crime. In 2015, the UNODC will broaden its focus in the region to encompass anti-money laundering activities, and will undertake a detailed transnational organised crime threat assessment across the Pacific. A ground-breaking research paper published as a chapter in Current Issues in Transitional Justice (2015) has identified the importance of transitional justice mechanisms and ‘processes to facilitate women’s empowerment by engaging better with counter-trafficking efforts’ in a bid to combat 3

trafficking in human beings. The authors use Cambodia and Myanmar as country case studies to draw attention to the need to bring human trafficking under the umbrella of transitional justice. They argue that discourse on the subject will facilitate creating policy initiatives ‘that do not occur at the expense of undermining the already fragile status and position of women in transitional societies’. Vietnam’s anti-trafficking law (2011) fails to effectively implement the UN Convention on Transnational Organised Crime (UNCTOC) and its accompanying Trafficking Protocol, according to 4

the author of a paper published in the 2015 edition of International Migration. Hoang Thi Thao Phuong concludes that under Vietnam’s national law there is insufficient implementation of Article 2 of the UN Trafficking Protocol, which addresses the protection of trafficked persons. Under the protocol, trafficked human beings are designated as victims of human rights abuse; however, Vietnam’s anti-trafficking law fails to provide measures for safe migration programmes, and in some cases criminalises the victims of human trafficking. Also of note •

of the 65 anniversary celebration of diplomatic ties between the two countries on 30 January. •

The remote Pacific island of Niue has been implicated in the latest HSBC scandal. Leaked files from the bank’s Swiss private banking arm show that Niue is one of numerous offshore financial centres that have sheltered the proceeds of transnational organised crime and tax evasion (with offshore accounts largely held by companies rather than the individuals who owned the money).

Szablewska, N. and Bradley, C. (2015). Social Justice Within Transitional Justice: The Case of Human Trafficking and Sex-Work in

Cambodia and Myanmar. In Current Issues in Transitional Justice (pp. 261-287). 4

UN Office on Drugs and Crime (UNODC). The Southeast Asia Opium Survey 2014 - Lao PDR, Myanmar highlights that Myanmar is also the world’s second largest producer after Afghanistan. According to the UNODC, Shan State in northern Myanmar, accounts for 89% of all opium poppy cultivation in the Golden Triangle. •

Indonesia faces an ‘emergency level drug problem’ according to the country’s president, Joko ‘Jokowi’ Widodo. In January 2015, six drug traffickers from Malawi, Brazil, Nigeria, the Netherlands, Vietnam and Indonesia were executed in Indonesia. The Indonesian government continues to defend its use of the death penalty, despite widespread condemnation from NGOs and the United Nations.