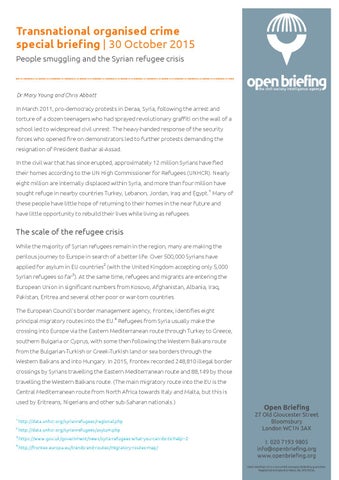 Dr Mary Young and Chris Abbott In March 2011, pro-democracy protests in Deraa, Syria, following the arrest and torture of a dozen teenagers who had sprayed revolutionary graffiti on the wall of a school led to widespread civil unrest. The heavy-handed response of the security forces who opened fire on demonstrators led to further protests demanding the resignation of President Bashar al-Assad. In the civil war that has since erupted, approximately 12 million Syrians have fled their homes according to the UN High Commissioner for Refugees (UNHCR). Nearly eight million are internally displaced within Syria, and more than four million have 1

sought refuge in nearby countries Turkey, Lebanon, Jordan, Iraq and Egypt. Many of these people have little hope of returning to their homes in the near future and have little opportunity to rebuild their lives while living as refugees.

The scale of the refugee crisis While the majority of Syrian refugees remain in the region, many are making the perilous journey to Europe in search of a better life. Over 500,000 Syrians have 2

applied for asylum in EU countries (with the United Kingdom accepting only 5,000 3

Not all who attempt the journey to Europe survive it. On 28 August 2015, the bodies of 71 people from Afghanistan, Syria and Iraq were discovered in an abandoned truck in Austria. On 2 September, the body of three-year-old Aylan Kurdi was found washed ashore on a beach in Turkey, prompting widespread outrage for the first time. On 13 September, 34 people, including babies and children, drowned when their boat sank off the small Greek island of Farmakonisi. On 15 September it was reported that 22 people drowned trying to reach the island of Kos. And on 29 October, at least 22 people drowned when two boats sunk in rough seas near Kalymnos and Rhodes. There were 4,800 known drownings of people attempting to cross 5

the Mediterranean between October 2013 and April 2015 alone.

The tragedies heralded by the worst refugee crisis in Europe since World War II have been facilitated by the organised crime groups that peddle their lucrative trade in smuggling human beings. The European Union’s law enforcement agency, Europol, is currently tracking up to 30,000 people suspected of being 6

involved in the organised crime gangs that smuggle refugees from the Middle East and Africa to Europe.

There are currently 1,400 people-smuggling investigations taking place across Europe. This underlines the magnitude of both the current refugee crisis and also the strength of the organised crime groups that profit from it.

Transnational people smuggling gangs While the European powers disagree on how best to deal with the refugee crisis, organised crime groups are positioning themselves to continue exploiting displaced and vulnerable people. People smuggling is now a multibillion-dollar business, possibly more profitable than the trade in illicit drugs. Organised crime gangs profit from those fleeing the conflict in Syria by offering services that include falsifying documents and identification papers, bribing border guards and arranging the transportation of refugees out of the country and onwards towards Europe. Although some people smuggling networks are organised criminal structures, many are loosely-linked chains of individual criminals, which makes it difficult for law enforcement agencies to dismantle them.

Organised crime groups in the Balkans, Turkey and Greece are traditionally hierarchical and localised; however, they are responding to the crisis in Syria by evolving to become transnational in nature. Transnational organised crime groups are multidimensional in their modus operandi and can respond to the varied smuggling requirements favoured at a particular time, which in this case is the movement of refugees. The European Commission (EC) has also noted the changing nature of the criminal operations smuggling refugees. It states that transportation methods by sea have largely evolved from small, wooden or inflatable vessels to steel cargo ships between 50 and 100 metres long transporting from 250 to 800 migrants at a time. The people on board pay between $5,000 (£3,250) and $7,000 (£4,500) per person for 8

the trip from Turkey to Europe. According to these figures, organised criminal gangs can earn between $1.25 million (£820,000) and $5.6 million (£3.65 million) per trip. Even considering the considerable costs involved in running a smuggling operation, the scale of the potential profits is clear. (In an interview with the Guardian in January 2015, Abu Hamada, the kingpin of the Syrian smuggling network in Egypt, claimed 9

Tackling the problem Trying to combat organised criminal gangs is always difficult. But when the commodity that is being smuggled is people who are willing to go to desperate lengths in order to escape their situation, the gangs will always have the advantage over law enforcement agencies, as people smuggling (as opposed to human trafficking) usually takes place with consent. Furthermore, confronting the organised crime groups involved in people smuggling has traditionally taken a back seat in favour of tackling those involved in the illicit drugs trade or linked to terrorists. However, the Syrian refugee crisis has highlighted the need for efforts to be ramped up in the campaign against people smuggling groups. There are now active steps being taken to regain control of the refugee/migrant crisis and to combat the organised crime gangs profiting from it. On 8 October 2015, EU ministers for home affairs and ministers for foreign affairs met with their counterparts from Turkey, Lebanon, Jordan and the Western Balkans at the Eastern MediterraneanWestern Balkans route conference. The conference adopted a declaration that included increasing support to Jordan, Lebanon and Turkey and transit countries and cooperation to combat the organised 10

crime gangs responsible for people smuggling and human trafficking. At the Meeting on the Western Balkans Migration Route on 25 October 2015, the leaders of Albania, Austria, Bulgaria, Croatia, Macedonia, Germany, Greece, Hungary, Romania, Serbia and Slovenia agreed to step up actions against people 11

smuggling and human trafficking with the support of Europol, Frontex and Interpol.

Other initiatives by the European Union include strengthening the powers of the Network of Immigration Liaison Officers; reinforcing Europol’s Focal Point Checkpoint team, which investigates the facilitation of irregular migration; creating a dedicated maritime intelligence task force, Joint Operation Team MARE, to combat smuggling networks operating in the Mediterranean; and implementing multilateral and unified responses by the law enforcement agencies of member states aimed at dismantling people smuggling operations. In addition, the EU Action Plan against Migrant Smuggling is being implemented in order to change migrant smuggling networks from &#39;low risk, high return&#39; operations into &#39;high risk, low return&#39; 12

ones. Efforts by the European Commission to manage the crisis include the ‘hotspot approach’, whereby Migration Management Support Teams are located at strategic locations, including Italian and Greek islands, and sending out warning letters to member states to fully comply with the Common European Asylum System. Individual member states are also undertaking their own initiatives to tackle the problem of organised crime and people smuggling. For example, in June 2015 the British government deployed a law enforcement taskforce made up of 90 officers from the National Crime Agency, the UK Border Force, the Home Office’s Immigration Enforcement team and the Crown Prosecution Service. The overarching objective of the taskforce is to dismantle the criminal operations smuggling people into Europe. To its shame, however, in October 2015 the British government withdrew the last two Border Force boats carrying out proactive search and rescue operations in the Mediterranean. 10

Ultimately, the organised crime gangs who smuggle refugees out of Syria and Turkey and into Europe are empowered by the lack of coordinated policy action from European countries concerning how and where to home the refugees. Europe’s failure places more Syrian refugees at risk. Indeed, on 15 September 2015, the UNHCR released a statement expressing ‘deep disappointment that European Union member states 13

failed to reach agreement over a wider relocation plan of up to 120,000 people’. If Europe cannot agree on a harmonised and humane policy response to the refugee crisis, organised crime gangs will continue to exploit vulnerable Syrians for profit.

Open Briefing is the world’s first civil society intelligence agency. Founded in 2011, our mission is to keep those striving to make the world a better place safe and informed. We provide groundbreaking intelligence and security services to aid agencies, human rights groups, peacebuilding organisations and concerned citizens. We do this so that a stronger civil society can promote alternatives to armed conflict, protect human rights and safeguard the environment. Key services we provide include: •

Responding to requests for intelligence, security or training from NGOs and journalists.

Developing innovative policy solutions and promoting them to government.

Open Briefing is a bold and ambitious nonprofit social enterprise. We are a unique international collaboration of intelligence, military, law enforcement and government professionals working tirelessly behind the scenes to make a difference. We are challenging the status quo. We are your intelligence agency. www.openbriefing.org