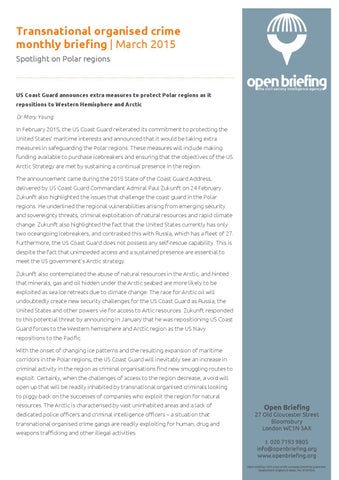 US Coast Guard announces extra measures to protect Polar regions as it repositions to Western Hemisphere and Arctic Dr Mary Young In February 2015, the US Coast Guard reiterated its commitment to protecting the United States’ maritime interests and announced that it would be taking extra measures in safeguarding the Polar regions. These measures will include making funding available to purchase icebreakers and ensuring that the objectives of the US Arctic Strategy are met by sustaining a continual presence in the region. The announcement came during the 2015 State of the Coast Guard Address, delivered by US Coast Guard Commandant Admiral Paul Zukunft on 24 February. Zukunft also highlighted the issues that challenge the coast guard in the Polar regions. He underlined the regional vulnerabilities arising from emerging security and sovereignty threats, criminal exploitation of natural resources and rapid climate change. Zukunft also highlighted the fact that the United States currently has only two oceangoing icebreakers, and contrasted this with Russia, which has a fleet of 27. Furthermore, the US Coast Guard does not possess any self-rescue capability. This is despite the fact that unimpeded access and a sustained presence are essential to meet the US government’s Arctic strategy. Zukunft also contemplated the abuse of natural resources in the Arctic, and hinted that minerals, gas and oil hidden under the Arctic seabed are more likely to be exploited as sea ice retreats due to climate change. The race for Arctic oil will undoubtedly create new security challenges for the US Coast Guard as Russia, the United States and other powers vie for access to Artic resources. Zukunft responded to this potential threat by announcing in January that he was repositioning US Coast Guard forces to the Western hemisphere and Arctic region as the US Navy repositions to the Pacific. With the onset of changing ice patterns and the resulting expansion of maritime corridors in the Polar regions, the US Coast Guard will inevitably see an increase in criminal activity in the region as criminal organisations find new smuggling routes to exploit. Certainly, when the challenges of access to the region decrease, a void will open up that will be readily inhabited by transnational organised criminals looking to piggy-back on the successes of companies who exploit the region for natural resources. The Arctic is characterised by vast uninhabited areas and a lack of dedicated police officers and criminal intelligence officers – a situation that transnational organised crime gangs are readily exploiting for human, drug and weapons trafficking and other illegal activities.

Zukunft concluded his address by outlining the steps that need to be taken to combat the problems highlighted above. Namely, the US Coast Guard will continue to advocate for national icebreaking capability, continue to support and advocate for the United States’ accession to the Law of the Sea Convention, and will invest in partnerships to include all Arctic countries. The focus on these objectives will allow the US Coast Guard to continue to tackle transnational organised crime in the region. Other developments In February 2015, a cargo ship headed for Qingdao, China, was detained in Dutch Harbor on Amaknak Island in Unalaska, Alaska, as part of an ongoing investigation into allegations of transnational environmental criminal activities. Concerns surrounding potential environmental law breaches were raised when the 600-foot container vessel docked in Dutch Harbor on 12 February due to damage incurred during passage from China to Alaska. When coast guard officials boarded the ship to examine the damage they noticed possible environmental crimes, details of which have not been released, as this is an ongoing investigation. It is likely that the potential environmental crimes committed by the crew relate to the illegal harvesting of geoducks – a highly sought after large saltwater clam that is eaten as a delicacy and served as banquet food in Asia. China’s wealthy elite is the principle driver of demand for the mollusc. Half of the world’s harvested geoduck clams come from Vancouver and Alaska. The illegal demand for geoducks has significantly increased since December 2014, when China imposed an indefinite import ban on geoducks and other bivalves from the west coast of the United States after a consignment of the clams harvested from Ketchikan in Alaska was found to contain high levels of algae toxin. In a seminal paper, Dr. Andrea Charron of the University of Manitoba in Canada has questioned the current role of the North American Aerospace Defense Command (NORAD) in light of new security 1

challenges in the Arctic region. NORAD is a combined organisation of the United States and Canada that provides aerospace warning, air sovereignty, air defence and maritime warning for North America. In her paper, Charron argues that there has been an expansion of the meaning of the term ‘security threat’, to encompass new threats posed by transnational organised crimes, which has potentially redefined the role of NORAD in relation to the protection it affords for the Arctic. Specifically, there is an increasing awareness that transnational organised crime gangs and terrorism will permeate the region as northern activity increases and sea ice melts. With the Beaufort Sea, Chukchi Sea and Northwest Passage hosting a mushrooming amount of maritime traffic, NORAD will be required to address the new security challenge in the region. On 16 March 2015, the Russian military launched massive military manoeuvres in the Arctic and elsewhere. The five-day Arctic drills are designed to check the readiness of Russia&#39;s Northern Fleet and the military&#39;s ability to deploy additional forces from central Russia. The exercises involve 38,000 servicemen, more than 50 surface ships and submarines and 110 aircraft. The Russian defence minister, Sergei Shoigu, announced that the military will check its ability to reinforce its forces on the Arctic Novaya Zemlya and Franz Josef Land archipelagos and protect Russia’s borders on land, in the air and at sea. Exercises also took place in Siberia, the Stavropol region and on Sakhalin Island, the Kamchatka Peninsula and other areas in the far east. The military manoeuvres are evidence of Putin’s intention to bolster military strength amid tensions with the West over Ukraine and in the face of increased Western military preparedness.

New legislation to tax and regulate the use of marijuana in Alaska came into force on 24 February. The new legislation allows adults over 21 years of age to legally possess up to one ounce of marijuana and grow up to six plants. 2016 will herald a legitimate marijuana market in Alaska, whereby the drug will be cultivated, tested and sold by licensed, taxpaying businesses.

GRID-Arendal in Norway has been designated as the UN Environment Programme (UNEP) Polar Centre. The work of the UNEP Polar Centre on environmental assessments and early warning issues includes concentrating on threats posed by transnational environmental crime in the Arctic.

The Council of the Baltic Sea States (CBSS), currently under an Estonian presidency, has reiterated its commitment to combating human trafficking and has established, for the next mandate, a strategy for the Baltic Sea Task Force to effectively fight against transnational organised crime.