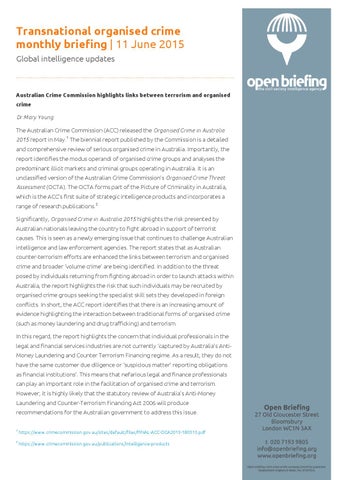 2015 report in May. The biennial report published by the Commission is a detailed and comprehensive review of serious organised crime in Australia. Importantly, the report identifies the modus operandi of organised crime groups and analyses the predominant illicit markets and criminal groups operating in Australia. It is an unclassified version of the Australian Crime Commission’s Organised Crime Threat Assessment (OCTA). The OCTA forms part of the Picture of Criminality in Australia, which is the ACC’s first suite of strategic intelligence products and incorporates a range of research publications.

Significantly, Organised Crime in Australia 2015 highlights the risk presented by Australian nationals leaving the country to fight abroad in support of terrorist causes. This is seen as a newly emerging issue that continues to challenge Australian intelligence and law enforcement agencies. The report states that as Australian counter-terrorism efforts are enhanced the links between terrorism and organised crime and broader ‘volume crime’ are being identified. In addition to the threat posed by individuals returning from fighting abroad in order to launch attacks within Australia, the report highlights the risk that such individuals may be recruited by organised crime groups seeking the specialist skill sets they developed in foreign conflicts. In short, the ACC report identifies that there is an increasing amount of evidence highlighting the interaction between traditional forms of organised crime (such as money laundering and drug trafficking) and terrorism. In this regard, the report highlights the concern that individual professionals in the legal and financial services industries are not currently ‘captured by Australia’s AntiMoney Laundering and Counter Terrorism Financing regime. As a result, they do not have the same customer due diligence or ‘suspicious matter’ reporting obligations as financial institutions’. This means that nefarious legal and finance professionals can play an important role in the facilitation of organised crime and terrorism. However, it is highly likely that the statutory review of Australia’s Anti-Money Laundering and Counter-Terrorism Financing Act 2006 will produce recommendations for the Australian government to address this issue. 1

The Australian Crime Commission identifies four other ‘enablers’ of organised crime in addition to money laundering and the criminal exploitation of business structures: cybercrime, identity crime, public sector corruption and violence. These activities all enable or facilitate organised crime, but are not ends in themselves. Efforts to tackle these enablers are crucial, as they can impact on all of the illicit markets in which those enabling activities are utilised. The report concludes that Australia is likely to see further integration of organised crime into legitimate markets. Organised crime gangs will develop their capabilities, particularly around information and communications technologies, and will adapt to use flexible network structures to increase resilience. Other developments Myanmar has refused to comply with a UN request that it offer citizenship status to the stateless Rohingya people, a Muslim ethnic minority considered to be outsiders by the Buddhist majority. As they seek to flee persecution in Myanmar, the Rohingya continue to be a target for organised criminals operating people smuggling and human trafficking rackets. Indeed, thousands of Rohingya migrants have made perilous and failed attempts to cross the Indian Ocean from Myanmar to neighbouring countries, including Malaysia and Bangladesh. Furthermore, what began as people smuggling – where migrants willingly take the risk – is developing into human trafficking – where women and children in particular are being abducted and sold as child brides or for sex abuse tourism. The call from the United Nations for Myanmar to offer citizenship to an estimated 810,000 people living in Rakhine State has likely been prompted by the discovery in Malaysia in May of 28 illegal migrant transit camps and 139 graves containing multiple corpses. Organised crime groups are becoming increasingly involved with ‘waste crime’ according to a report 3

by the Criminal Justice Inspectorate of Northern Ireland (CJI). The report prompted a call from James Corrigan, Deputy Chief Inspector of Criminal Justice in Northern Ireland, that the Northern Ireland Environment Agency (NIEA) enhances its enforcement and regulation activities and deals more rigorously with offenders involved in environmental crime. The report reviews the NIEA Environmental Crime Unit (ECU) and its responses to serious organised environmental crime. Such crimes include the United Kingdom’s largest illegal dump at Mobuoy, County Londonderry. In 2012, an estimated total of 516,000 tonnes of macerated waste stretching over 1.4 kilometres was discovered near the town. The CJI’s report introduces strategic and operational recommendations to help strengthen the effectiveness of the ECU’s ability to tackle waste crime. On 28 May, the World Health Organisation (WHO) issued a press release calling for an end to the 4

The call came three days before World No Tobacco Day on 31 May. According to the WHO, ‘Eliminating the illicit trade in tobacco would generate an annual tax windfall of US$31 billion for governments’ and also help to curb criminal activity. The illegal tobacco trade is able to offer products at lower prices by operating through a complicated web of criminal manufacturing, counterfeiting, smuggling and tax evasion. The WHO urges member states to sign the Protocol to Eliminate the Illicit Trade in Tobacco Products. As of 28 May, eight countries had ratified the Protocol; 40 countries need to ratify it for it to become international law. 3

Highlighting the fact that organised crime can occur in any sector where profits are to be made, Robert Smith and Professor Gerard McElwee argue in a recently published chapter that there is an emerging international market for stolen tractors and plant in the United 5

Kingdom. Furthermore, this new strand of organised crime is transnational in nature and is controlled by criminal networks, such as the Italian, Polish and Turkish mafias. •

Five researchers from the King Juan Carlos University in Spain have identified the major illegal markets and networks in Spain and argue that the illicit proceeds of organized crime are invested in the legal economy in Spain. As part of a report on organised crime in Europe commissioned by the European Commission, the authors state that the Costa del Sol area is one of the most significant areas in Spain for laundering the proceeds of organised crime through the real estate market.

States (OAS). The report identifies the use of malware as one of the most significant trends because of the increasing sophistication of attackers and their in-depth knowledge of supervisory control and data acquisition (SCADA) systems. •

In an interview with New Europe, the Mexican ambassador to the European Union, Juan Jose Gomez Camacho, states that despite ongoing security challenges in Mexico (primarily related to transnational organised crime and corruption), foreign investment and tourism continue to 8

grow in in the country. According to the Council on Hemispheric Affairs (COHA), China is now Mexico’s second largest trading partner after the United States, with the European Union in third position. •

In a groundbreaking research paper, Kakusa Chiluwa, from the University of Zambia, explores 9

the notion that illicit drug trafficking in Zambia is no longer a crime dominated by men. Chiluwa expands on the theory that the poor socioeconomic position of women generally,

combined with a low level of education and formal employment, strongly influences the position of women as traffickers in Zambia.

Open Briefing is the worldâ&#x20AC;&#x2122;s first civil society intelligence agency. We produce actionable and predictive intelligence on defence, security and foreign policy matters. We tell you what has happened and what is likely to happen next. Most importantly, we tell you why. We do this so that better informed citizens can more effectively engage in peace and security debates and civil society organisations can make the right advocacy choices. Together, we can influence positive policy decisions by our governments. Open Briefing is a bold and ambitious not-for-profit social enterprise. We are a unique collaboration of intelligence, military, law enforcement and government professionals from around the world. Challenge the status quo. Take intelligence into your own hands. www.openbriefing.org 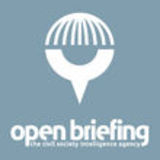