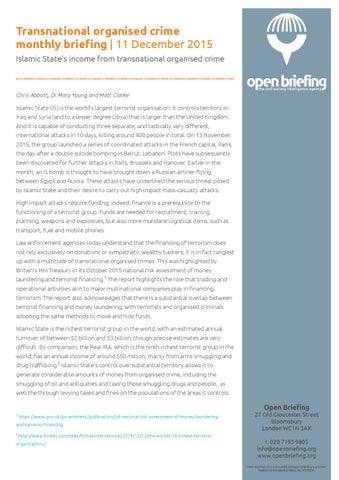 Chris Abbott, Dr Mary Young and Matt Clarke Islamic State (IS) is the world’s largest terrorist organisation. It controls territory in Iraq and Syria (and to a lesser degree Libya) that is larger than the United Kingdom. And it is capable of conducting three separate, and tactically very different, international attacks in 10 days, killing around 400 people in total. On 13 November 2015, the group launched a series of coordinated attacks in the French capital, Paris, the day after a double suicide bombing in Beirut, Lebanon. Plots have subsequently been discovered for further attacks in Paris, Brussels and Hanover. Earlier in the month, an IS bomb is thought to have brought down a Russian airliner flying between Egypt and Russia. These attacks have underlined the serious threat posed by Islamic State and their desire to carry out high-impact mass-casualty attacks. High impact attacks require funding. Indeed, finance is a prerequisite to the functioning of a terrorist group. Funds are needed for recruitment, training, planning, weapons and explosives, but also more mundane logistical items, such as transport, fuel and mobile phones. Law enforcement agencies today understand that the financing of terrorism does not rely exclusively on donations or sympathetic wealthy backers; it is in fact tangled up with a multitude of transnational organised crimes. This was highlighted by Britain’s HM Treasury in its October 2015 national risk assessment of money 1

laundering and terrorist financing. The report highlights the role that trading and operational activities akin to major multinational companies play in financing terrorism. The report also acknowledges that there is a substantial overlap between terrorist financing and money laundering, with terrorists and organised criminals adopting the same methods to move and hide funds. Islamic State is the richest terrorist group in the world, with an estimated annual turnover of between $2 billion and $3 billion, though precise estimates are very difficult. By comparison, the Real IRA, which is the ninth richest terrorist group in the world, has an annual income of around $50 million, mainly from arms smuggling and 2

drug trafficking. Islamic State’s control over substantial territory allows it to generate considerable amounts of money from organised crime, including the smuggling of oil and antiquities and taxing those smuggling drugs and people, as well the through levying taxes and fines on the populations of the areas it controls.

Table 1 outlines Islamic Stateâ&amp;#x20AC;&amp;#x2122;s principal sources of income. This does not include one-off gains, such as the looting of Iraqi banks, or income from legitimate enterprises, such as agriculture. Table 1. Estimated Islamic State income by source.

Tax on drug trafficking (from Afghanistan)

Tax on people smuggling (in Libya)

The group requires substantial funding not only in order to launch attacks abroad but because, unlike most other terrorist groups, it has considerable costs associated with controlling territory with an estimate 8-10 million inhabitants and a standing army of up to 50,000 fighters. One Western intelligence report estimated that Islamic State needed between $523.5 million and $815.3 million a year to run its operations.

Until recently, one of the main sources of revenue for Islamic State was oil smuggling. The group holds oil fields in northeast Syria and, until recently, northern Iraq. The UN Security Council estimates that Islamic State generates an income of between $846,000 and $1,645,000 per day from the sale of oil on the black 9

market. Oil is shipped out of Syria and Iraq to Turkey, Kurdish regions in Iraq, and Jordan. The majority of the oil, however, is sold to local traders who then ship the oil onto other markets or sell it to the Syrian government or opposition forces. Islamic State sells oil on the black market for between $20 and $40 per 10

barrel, though it is currently thought to be closer to lower benchmark, which makes it substantially cheaper than oil on the legitimate market (which is currently at around $40 a barrel).

Syria has 2.5 billion barrels of proven oil reserves. The majority of this comes from the Deir-ez-Zour region, including the Omar oil basin, which Islamic State now controls. This allows them to produce the 25,000 barrels a day that makes up the majority of their oil production. Even at $20 a barrel, oil from this region of Syria nets Islamic State an estimated $500,000 a day. Iraq has proven oil reserves of 125.4 billion barrels, though its main oil fields are far from IS territory. Kirkuk was the main field Islamic State were able to capture in Iraq, but this was retaken and held by Peshmerga forces in February 2015. Until the end of October 2015, the Baiji refinery was also under IS control. The Baiji and Al-Qayyarah refineries were the centre of IS oil production in Iraq. Islamic State does still hold the Al-Qayyarah refinery, which can produce 12

up to 20,000 barrels of oil per day (though actual production is estimated to be closer to 8,000 barrels ). Even at the lower estimates of production and oil price, this field accounts for $160,000 per day for the group. However, local ground forces and coalition airstrikes are focused on retaking the Al-Qayyarah refinery. Before coalition and Russian airstrikes began targeting facilities and transportation associated with oil production, oil generated a level of income that set Islamic State apart from any other terrorist organisation, with double the annual turnover of the next richest terrorist group, Hamas. Therefore, those opposing Islamic State have focussed on disrupting the production of oil to limit the supply they have to sell and sanctioning those buying the oil in order to limit demand. While the sanctions may prove effective against international clients, the majority of the oil is sold to local traders that are somewhat immune to sanctions. As such, the main focus remains on disrupting production. As its oil infrastructure is targeted, Islamic State is refocussing its efforts on other sources of finance. While not believed the be directly involved in either the illicit drugs trade or people smuggling, both of these supply chains cross IS held territory in Iraq, Syria and Libya. The group is thought to be profiting by taxing the trafficking of heroin from Afghanistan, where it has been making gains from the Taliban. Every year 75 tonnes of Afghan heroin is smuggled into Iran and across Iraq and Syria before entering Turkey.

taxing the Afghan heroin trafficked through its territory in Iraq. The group also controls the drugs trade in parts of Libya, where it has a sizable underworld presence and is also accused of taxing the people smugglers. The trans-Sahara migrant smuggling trade along the coast of Libya is now thought to be worth 15

$255-323 million per year, though it is not clear how much Islamic State makes from this. In Iraq and Syria, women and girls are taken from villages under IS control and given to IS fighters as gifts, forced to work in IS brothels or sold at slave auctions for around $150.

Islamic State has also institutionalised the looting of antiquities from the areas it controls. Although items deemed idolatrous or offensive to Islam are destroyed, those antiquities that survive are treated just like any other resource. Islamic State has turned pre-existing looting in these areas into a highly lucrative trade by taxing looted antiquities and controlling access to sites. It has also brought in its own archaeologists, digging teams and machinery and created ‘antiquities ministries’ and a ‘ministry for precious resources’. Artefacts from Iraq and Syria are smuggled out through Turkey or Lebanon and laundered in Switzerland or Germany before being sold in auction houses in London or New York. Iraq’s ambassador to the United Nations, Mohamed Ali Alhakim, has claimed that Islamic State is earning as much as $100 million annually 17

from antiquities trading, though the origin of that figure is unclear. The systematic looting and 18

trafficking of antiquities is certainly thought to have netted Islamic State tens of millions of dollars, with a Western intelligence report purportedly stating that the group earned between $22 million and $55 19

A lesser, though not insignificant, income stream for Islamic State is ransoms. The group captures foreign civilians – predominately journalists and aid workers – and ransoms them back to their governments. These ransom payments are irregular, but each one can be in the multi-million dollar range. In August 2014, Islamic State demanded $136 million for James Foley – the American hostage ultimately beheaded – while in January 2015, the group demanded $200 million for two Japanese hostages, who were also killed. 20

Islamic State did take at least $20 million in ransoms in total in 2014. Sometimes, the group will set a high ransom for an individual foreigner, such as Foley, but often the group will bulk ransom a large number of Iraqis or Syrians at once. The United States and many other countries have long had an explicit and consistently applied no-ransom policy. Indeed, not paying ransoms is considered to be the best way to reduce the risk of kidnappings, as it removes the income incentive. While ransoms can provide an occasional boost to the Islamic State’s finances, it is the territory that it controls that provides the group with its most secure revenue base. By holding territory in Iraq and Syria, Islamic State is able to generate considerable funds through taxes, fines and tolls. Table 2 shows some of 21

the levels of taxation:

Charge for truckers to transport their wares

Annual rent for a market stall

Street cleaning outside a shop

Sales tax on oil sold in a market

Such revenue streams are largely immune to sanctions and air strikes and provide nearly $1 billion a year.

This makes the strategy used against al-Qaeda of cutting the group of from donors in the Persian Gulf largely impotent against Islamic State. One approach is to stop the group getting access to the international financial system. The problem is that Islamic State trades with others within the countries it operates, including the Kurds in Iraq and Bashar al-Assadâ&amp;#x20AC;&amp;#x2122;s government in Syria, and launders money through money-changing and transfer businesses in southern Turkey. Ultimately, until it is dislodged from the territory it controls, Islamic State will have a steady and substantial source of income as a quasi-state that will continue even if its income from transnational organised crime is cut off.

Open Briefing is the world’s first civil society intelligence agency. Founded in 2011, our mission is to keep those striving to make the world a better place safe and informed. We provide groundbreaking intelligence and security services to aid agencies, human rights groups, peacebuilding organisations and concerned citizens. We do this so that a stronger civil society can promote alternatives to armed conflict, protect human rights and safeguard the environment. Key services we provide include: •

Responding to requests for intelligence, security or training from NGOs and journalists.

Developing innovative policy solutions and promoting them to government.

Open Briefing is a bold and ambitious nonprofit social enterprise. We are a unique international collaboration of intelligence, military, law enforcement and government professionals working tirelessly behind the scenes to make a difference. We are challenging the status quo. We are your intelligence agency. www.openbriefing.org