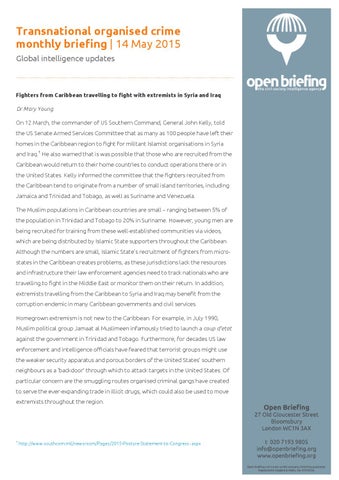 Fighters from Caribbean travelling to fight with extremists in Syria and Iraq Dr Mary Young On 12 March, the commander of US Southern Command, General John Kelly, told the US Senate Armed Services Committee that as many as 100 people have left their homes in the Caribbean region to fight for militant Islamist organisations in Syria 1

and Iraq. He also warned that is was possible that those who are recruited from the Caribbean would return to their home countries to conduct operations there or in the United States. Kelly informed the committee that the fighters recruited from the Caribbean tend to originate from a number of small island territories, including Jamaica and Trinidad and Tobago, as well as Suriname and Venezuela. The Muslim populations in Caribbean countries are small – ranging between 5% of the population in Trinidad and Tobago to 20% in Suriname. However, young men are being recruited for training from these well-established communities via videos, which are being distributed by Islamic State supporters throughout the Caribbean. Although the numbers are small, Islamic State’s recruitment of fighters from microstates in the Caribbean creates problems, as these jurisdictions lack the resources and infrastructure their law enforcement agencies need to track nationals who are travelling to fight in the Middle East or monitor them on their return. In addition, extremists travelling from the Caribbean to Syria and Iraq may benefit from the corruption endemic in many Caribbean governments and civil services. Homegrown extremism is not new to the Caribbean. For example, in July 1990, Muslim political group Jamaat al Muslimeen infamously tried to launch a coup d&#39;etat against the government in Trinidad and Tobago. Furthermore, for decades US law enforcement and intelligence officials have feared that terrorist groups might use the weaker security apparatus and porous borders of the United States’ southern neighbours as a ‘backdoor’ through which to attack targets in the United States. Of particular concern are the smuggling routes organised criminal gangs have created to serve the ever-expanding trade in illicit drugs, which could also be used to move extremists throughout the region.

At present, such fears remain in the realm of the possible, and there are reportedly no known IS plans to attack the United States through such routes. Kelly himself admitted in his testimony to the Senate Armed Services Committee that ‘Islamic extremist organizations are not very well entrenched in my part of the world [Central and South America]. I don&#39;t see any direct terrorist threat right now.’ However, the risk is long-standing, and US security officials will need to better integrate their work tackling drug traffickers and terrorist networks in order to mitigate the dangers this matrix presents. Other developments th

The 13 UN Congress on Crime Prevention and Criminal Justice took place in Doha, Qatar, on 12-19 April. The congress focused on boosting global efforts to tackle transnational organised environmental crime. Countries that attended the Congress will adopt the Doha Declaration (A/CONF.222/L.6) – a document that aims to integrate crime prevention and criminal justice into the wider UN agenda in order 2

to address current social and economic issues. According to TRAFFIC, the wildlife trade monitoring network, the Doha Declaration urges countries to ‘take the fight to environmental criminals’ by enhancing efforts to combat new and emerging forms of transnational organised crime. Such efforts include the implementation of comprehensive criminal justice policies and multilateral, international cooperation. TRAFFIC’s director of policy, Sabri Zain, welcomes the inclusion in the declaration of a call for countries to deal comprehensively with organised crimes that threaten the environment, such as ‘trafficking in wildlife, 3

including flora and fauna, timber and timber products and hazardous waste, as well as poaching’.

During a meeting on 8 May at Parliament Hill with the Filipino president, Benigno Aquino, Canada’s prime minister, Stephen Harper, announced Canada’s provision of counter-terrorism support to police in the Philippines. In a shrewd political manoeuvre to firm up commercial and security ties with the Philippines, Canada is likely to focus on providing support to help Filipino law enforcement agencies combat terrorism and transnational organised crime, including drug trafficking and the trade in human beings. Training counter-terrorism troops in other jurisdictions is not a new move for for Canada. Indeed, in April, the Canadian government committed to a two-year counter-terrorism training programme for Jordanian troops. However, the scope of the Canadian commitment in the Philippines will be considerably smaller than that planned in Jordan. On 4 May, member states gathered at the 22

made a total of 258 recommendations for the Maldives, in anticipation of the United Nation’s 30

session of the Human Rights Council, to be held from 14 September to 2 October 2015. The UPR involves collecting information on the human rights situations in all UN member states. The Maldives has taken part in just two UPRs, and its politicised judicial system and human rights legislation face criticism following a criminal case that the Supreme Court of the Maldives initiated in late 2014 against members of the country’s Human Rights Commission. However, the Maldives rejected 49 of the recommendations, including those allowing freedom of religion, protecting the rights of homosexual people, banning the death penalty and removing a requirement that prevents non-Muslims from being members of the Human Rights Commission of Maldives.

In an article, the Head of Forensic Accounting at Police Scotland, Kenneth Murray, has argued that it is imperative for law enforcement agencies to ‘develop an understanding of organised 4

crime business structures’ if criminal organisations are to be effectively undermined. In his article for the Journal of Financial Crime, Murray states that developing an understanding of illicit businesses and the way in which they operate ‘is a necessary component of a modern effective law enforcement response’ to organised crime in the United Kingdom and beyond. •

Two researchers from the University of Waterloo in Canada, David Hofmann and Owen Gallupe, argue in an article for Global Crime that ‘[e]ffective leadership is a crucial component in organisational success. This also applies to criminal networks that have the 5

added challenge of operating in a high-risk hostile environment’. The authors explore the methods employed by criminal organisations to protect their leaders, including communication and structural practices to act as ‘buffer zones’. The article breaks new ground in its presentation of data collected from a previously unexamined drug-trafficking network, namely the Prada cocaine-trafficking network. •

The Council of the European Union has adopted the draft Fourth Anti-Money Laundering Directive. The most recent changes introduced by the Fourth Directive include a widening of the definition of predicate crimes – this will now include ‘tax evasion’ – and enhanced customer due diligence. It is envisaged that the Fourth Directive will lift the lid on strong banking confidentiality and act as a deterrent to tax evaders and those wishing to launder their illegal proceeds of crime.

and money laundering in Nigeria. In their article for the Journal of Money Laundering Control, Anna Markovska and Nya Adams found that ‘[e]ndemic corruption of the political elite leads to the abuse of the constitutional immunity clause, and significantly impairs the activities of the antimoney laundering agencies.’