What is the current status of missing US freelance journalist Austin Tice? 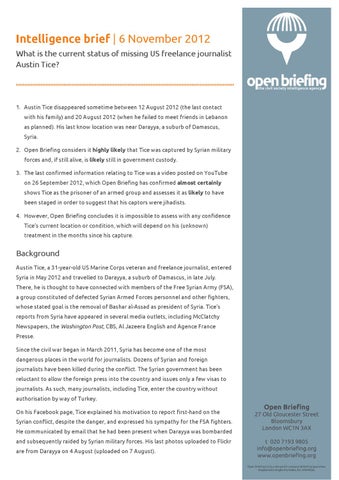 Intelligence brief | 6 November 2012 What is the current status of missing US freelance journalist Austin Tice?

1. Austin Tice disappeared sometime between 12 August 2012 (the last contact with his family) and 20 August 2012 (when he failed to meet friends in Lebanon as planned). His last know location was near Darayya, a suburb of Damascus, Syria. 2. Open Briefing considers it highly likely that Tice was captured by Syrian military forces and, if still alive, is likely still in government custody. 3. The last confirmed information relating to Tice was a video posted on YouTube on 26 September 2012, which Open Briefing has confirmed almost certainly shows Tice as the prisoner of an armed group and assesses it as likely to have been staged in order to suggest that his captors were jihadists. 4. However, Open Briefing concludes it is impossible to assess with any confidence Ticeâ&amp;#x20AC;&amp;#x2122;s current location or condition, which will depend on his (unknown) treatment in the months since his capture.

Background Austin Tice, a 31-year-old US Marine Corps veteran and freelance journalist, entered Syria in May 2012 and travelled to Darayya, a suburb of Damascus, in late July. There, he is thought to have connected with members of the Free Syrian Army (FSA), a group constituted of defected Syrian Armed Forces personnel and other fighters, whose stated goal is the removal of Bashar al-Assad as president of Syria. Ticeâ&amp;#x20AC;&amp;#x2122;s reports from Syria have appeared in several media outlets, including McClatchy Newspapers, the Washington Post, CBS, Al Jazeera English and Agence France Presse. Since the civil war began in March 2011, Syria has become one of the most dangerous places in the world for journalists. Dozens of Syrian and foreign journalists have been killed during the conflict. The Syrian government has been reluctant to allow the foreign press into the country and issues only a few visas to journalists. As such, many journalists, including Tice, enter the country without authorisation by way of Turkey. On his Facebook page, Tice explained his motivation to report first-hand on the Syrian conflict, despite the danger, and expressed his sympathy for the FSA fighters. He communicated by email that he had been present when Darayya was bombarded and subsequently raided by Syrian military forces. His last photos uploaded to Flickr are from Darayya on 4 August (uploaded on 7 August).

On 11 August, he tweeted that he had celebrated his birthday at an “FSA pool party.” He last communicated with his parents on 12 August and has not been heard from since. He did not meet with friends in Lebanon on 20 August as planned; on 23 August, his family reported him missing.

The “Austin Tice still alive” video On 26 September 2012, “khalidfree75” uploaded a short video under the title “the American Journalist 1

a Syrian opposition group, the Network News of the Syrian Revolution. Most parties interested in the case seem to have overlooked this initial posting on an opposition group’s page. Six days later, on 1 October, it was shared on Facebook and Twitter by a pro-Assad group, the Media Channel for Assad’s 3

Syria; it was only picked up by the media at this point. It is unclear when the YouTube title was changed to “Austin Tice still alive.” Open Briefing analysts conducted preliminary imagery and technical analyses of the video and published 4

their findings on 3 October 2012. The salient points from this assessment are: Irregularities suggest this is unlikely to be a jihadist video. The video is short, of low quality and badly edited and produced, with no credits, ident or additional statement, which is highly unusual for Jabhat al-Nusra or other jihadist groups. The captors repeatedly shout “Allāhu Akbar” (“God is great”) and appear to be dressed in approximations of traditional Pashtun/Afghan/Pakistani dress (shalmar kameez), which, curiously, look to be either brand new or freshly laundered and pressed. The prisoner in the video is almost certainly Austin Tice. The prisoner in the video is wearing the same olive green short-sleeved shirt Tice is shown wearing in a photograph used by CNN on 4 September and the bottom of a tattoo is visible on the prisoner’s upper left arm in the same position Tice is known to have a “tribal” tattoo. Tice’s parents and colleagues have since confirmed it is Tice in the video. The video was likely made relatively soon after Tice’s capture. The video will have been filmed sometime between Tice’s last contact with his family on 12 August and the uploading of the video to YouTube on 26 September. Tice’s level of beard growth and the fact he is still wearing his own clothes suggest it was probably filmed relatively soon after his capture rather than weeks later.

Identifying Tice’s captors The lack of corroborated open source intelligence confirming the identity of Tice’s captors means that competing hypothesis must be analysed against the available evidence. As part of this process, Open Briefing identified the groups listed overleaf as plausible captors (recognising that the boundaries between each are sometimes blurred). 1

currently oversees US interests in Damascus). At a 1 October press conference, US State Department spokesperson Victoria Nuland stated that they could not confirm the identity of the prisoner in the YouTube video or verify its authenticity but that to the best of their knowledge Tice was in Syrian government custody.

Executives at McClatchy Newspapers and the Washington Post have confirmed that information gathered from their own sources supports the view that Tice was detained by Syrian government forces. Tice’s family has not publicly speculated on the identity of his captors, but they have issued a plea to the Syrian government to assist in locating him. There has been some speculation that Tice may be in the custody of Jabhat al-Nusra or other jihadist group, and this is clearly what the YouTube video is suggesting. Tice had attempted to arrange an interview with an al-Nusra commander prior to his disappearance, although Matt Weaver, a UK-based Middle East expert and friend of Tice’s, confirms that the interview was cancelled by al-Nusra. In any case, as already mentioned, our own analysis of the video has identified several irregularities that suggest it is unlikely that Tice is being held by jihadists (at least at that point). (It should be noted that it has been suggested that Assad sometimes uses jihadist groups to carry out covert operations). Adding to the confusion of the Syrian conflict is the presence of pro-government militia, such as the Shabiha militia, who allegedly do the “dirty work” of the Syrian government. However, there is no evidence to suggest that these militia were involved in Tice’s disappearance. There is, of course, the possibility that Tice may be being held by the FSA or other armed opposition group. However, this is not supported by any evidence and it is unlikely given Tice’s sympathy and support for the FSA cause and reportedly good relationship with several of their members. Kidnapping a foreign national would not enhance foreign sympathy for its cause – something the FSA has actively sought. Furthermore, pro-FSA press statements, other than citing Western news sources, have offered no new information pertaining to Tice’s whereabouts. A final suggestion is that Tice was kidnapped by a criminal gang. The nature of the YouTube video and the lack of ransom demand make this highly unlikely.

The same analysis of competing hypotheses methodology was applied to the possible motivations for Syrian government forces detaining Tice. Plausible scenarios include: 1. Tice’s was actively targeted by the Syrian government for reporting in Western media outlets that was critical of the Assad regime and sympathetic to the FSA. 2. Tice was actively targeted by the Syrian government as a suspected CIA/Mossad agent supplying weapons and training to the FSA. 3. Tice was in the “wrong place at the wrong time” and detained for being a Western journalist on the ground in Syria, but there was no conspiracy or prior plan to do so. 4. Tice crossed the line from journalist to combatant and was captured by Syrian forces while fighting alongside the FSA, but there was no prior conspiracy or plan to detain him. It should be noted in relation to the second scenario that allegations that Tice is a CIA/Mossad agent have appeared in Syrian and Iranian media and Tice himself tweeted on 2 August that he is often assumed to be CIA. However, it is impossible to assess with any confidence the likely motivation of the Syrian government. A sensible working hypothesis might be that he was detained by government forces for being a Western journalist on the ground in or near Darayya and then used for propaganda purposes by elements of the Assad regime to highlight and exaggerate the threat posed by al-Qaeda extremists in Syria. Further discussion of this, or any other scenario, would be little more than speculation at this point though.

Tice’s likely location and condition The current likely location and condition of Tice are impossible to assess from the available information. It is not known if Tice remains with his original captors, has been passed on to a third party or has been executed. One troubling consideration is that, if the Syrian government has captured Tice and released a discredited “jihadist” video, then they have overplayed their hand and would not want Tice to be discovered in government custody at some later date. The Tice family, McClatchy Newspapers, the Washington Post and the FBI are working to locate Tice. Tice’s family are planning to travel to Beirut, Lebanon, shortly and their presence in the region may encourage individuals to come forward with further information. His appearance in the YouTube video does not offer evidence sufficient to determine his mental and physical condition, other than to say that he was clearly extremely distraught and his overall demeanour and religious comments in Arabic and English suggest that he feared for his life at that time. His current condition will depend on his (unknown) treatment during the months since his capture.

What is the current status of missing US freelance journalist Austin Tice?