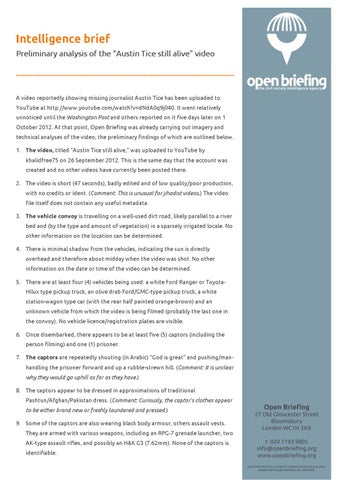 A video reportedly showing missing journalist Austin Tice has been uploaded to YouTube at http://www.youtube.com/watch?v=dNdA0q9j040. It went relatively unnoticed until the Washington Post and others reported on it five days later on 1 October 2012. At that point, Open Briefing was already carrying out imagery and technical analyses of the video, the preliminary findings of which are outlined below. 1. The video, titled “Austin Tice still alive,” was uploaded to YouTube by khalidfree75 on 26 September 2012. This is the same day that the account was created and no other videos have currently been posted there. 2. The video is short (47 seconds), badly edited and of low quality/poor production, with no credits or ident. (Comment: This is unusual for jihadist videos.) The video file itself does not contain any useful metadata. 3. The vehicle convoy is travelling on a well-used dirt road, likely parallel to a river bed and (by the type and amount of vegetation) in a sparsely irrigated locale. No other information on the location can be determined. 4. There is minimal shadow from the vehicles, indicating the sun is directly overhead and therefore about midday when the video was shot. No other information on the date or time of the video can be determined. 5. There are at least four (4) vehicles being used: a white Ford Ranger or ToyotaHilux type pickup truck, an olive drab Ford/GMC-type pickup truck, a white station-wagon type car (with the rear half painted orange-brown) and an unknown vehicle from which the video is being filmed (probably the last one in the convoy). No vehicle licence/registration plates are visible. 6. Once disembarked, there appears to be at least five (5) captors (including the person filming) and one (1) prisoner. 7. The captors are repeatedly shouting (in Arabic) “God is great” and pushing/manhandling the prisoner forward and up a rubble-strewn hill. (Comment: It is unclear why they would go uphill as far as they have.) 8. The captors appear to be dressed in approximations of traditional Pashtun/Afghan/Pakistan dress. (Comment: Curiously, the captor’s clothes appear to be either brand new or freshly laundered and pressed.) 9. Some of the captors are also wearing black body armour, others assault vests. They are armed with various weapons, including an RPG-7 grenade launcher, two AK-type assault rifles, and possibly an H&amp;K G3 (7.62mm). None of the captors is identifiable.

10. The prisoner is a male Caucasian with dark brown hair (curly on top), a moustache and about a week&#39;s worth (?) of beard growth. He is blindfolded and wearing khaki-coloured trousers (with no belt) and a dark olive green short-sleeved shirt. 11. The prisoner says (in Arabic) “In the name of God the Merciful,” and then utters the first half of the Shahadah (Islamic profession of monotheism), saying “there is no god but the Merciful.” (Comment: Here he mispronounces al-Raheem as al-Rahmeen, an important distinction.) The prisoner then says (in English) “Oh Jesus, oh Jesus,” before adding (in Arabic) “God, oh God.” (Comment: The prisoner is clearly out of breath and extremely distraught and his religious comments and overall demeanour suggest he likely fears for his life.)

Conclusion The prisoner shown in the video is almost certainly US freelance journalist Austin Tice. This conclusion is based on: (a) Clothing. The shirt the prisoner is wearing (dark olive green, short sleeved, collared, with two small buttoned breast pockets at the front and no epaulettes) appears to be the same one Tice is pictured wearing in a CNN report from 4 September 2012 (shown below).

(b) Visible distinguishing mark. At 00:00:37 and 00:00:42 in the video, what appears to be the lower part of a black tattoo is visible on the prisoner’s left upper arm, in the same location as a &quot;tribal&quot; tattoo Tice has (confirmed in a photograph, right, from Tice&#39;s family). It is unclear when the video was made but it is a fair assumption that it was sometime in the six-week period between 13 August 2012 (the last time Tice was heard from) and 26 September 2012 (when the video was posted on YouTube). The level of beard growth and the fact he is still wearing his own clothes might suggest it was filmed relatively soon after his capture rather than weeks later. The key question is whether Tice is being held by a radical group (as the video might suggest) or the video has been staged and he is being held by Syrian government forces (as previously reported). The balance of probability remains the later – Syrian government custody – but no reliable conclusion can be drawn either way at present. Further analysis on this issue to follow. Last updated: 3 October 2012.