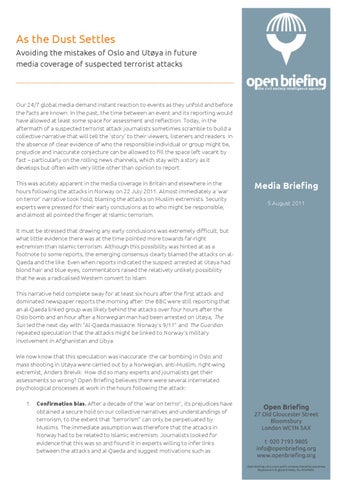 Our 24/7 global media demand instant reaction to events as they unfold and before the facts are known. In the past, the time between an event and its reporting would have allowed at least some space for assessment and reflection. Today, in the aftermath of a suspected terrorist attack journalists sometimes scramble to build a collective narrative that will tell the &#39;story&#39; to their viewers, listeners and readers. In the absence of clear evidence of who the responsible individual or group might be, prejudice and inaccurate conjecture can be allowed to fill the space left vacant by fact – particularly on the rolling news channels, which stay with a story as it develops but often with very little other than opinion to report. This was acutely apparent in the media coverage in Britain and elsewhere in the hours following the attacks in Norway on 22 July 2011. Almost immediately a &#39;war on terror&#39; narrative took hold, blaming the attacks on Muslim extremists. Security experts were pressed for their early conclusions as to who might be responsible, and almost all pointed the finger at Islamic terrorism. It must be stressed that drawing any early conclusions was extremely difficult, but what little evidence there was at the time pointed more towards far-right extremism than Islamic terrorism. Although this possibility was hinted at as a footnote to some reports, the emerging consensus clearly blamed the attacks on alQaeda and the like. Even when reports indicated the suspect arrested at Utøya had blond hair and blue eyes, commentators raised the relatively unlikely possibility that he was a radicalised Western convert to Islam. This narrative held complete sway for at least six hours after the first attack and dominated newspaper reports the morning after: the BBC were still reporting that an al-Qaeda linked group was likely behind the attacks over four hours after the Oslo bomb and an hour after a Norwegian man had been arrested on Utøya; The Sun led the next day with “Al-Qaeda massacre: Norway&#39;s 9/11” and The Guardian repeated speculation that the attacks might be linked to Norway&#39;s military involvement in Afghanistan and Libya. We now know that this speculation was inaccurate: the car bombing in Oslo and mass shooting in Utøya were carried out by a Norwegian, anti-Muslim, right-wing extremist, Anders Breivik. How did so many experts and journalists get their assessments so wrong? Open Briefing believes there were several interrelated psychological processes at work in the hours following the attack: 1. Confirmation bias. After a decade of the &#39;war on terror&#39;, its prejudices have obtained a secure hold on our collective narratives and understandings of terrorism, to the extent that “terrorism” can only be perpetuated by Muslims. The immediate assumption was therefore that the attacks in Norway had to be related to Islamic extremism. Journalists looked for evidence that this was so and found it in experts willing to infer links between the attacks and al-Qaeda and suggest motivations such as

Norway&#39;s military involvement in Afghanistan and Libya, the indictment of the radical cleric Mullah Krekar on terror charges, or the printing of cartoons depicting the Prophet Muhammad in a Norwegian newspaper. 2. Expert bias. The best experts embrace and try to understand uncertainty and complexity, offering conclusions bracketed by caveats. Unfortunately the media preference for simplicity and sound bites all-too-often opens the door to the worst kind of expert: confident that they understand the world and therefore overly confident in their conclusions. This is significant as we generally overvalue the opinion of experts â&amp;#x20AC;&amp;#x201C; allowing credentials to replace logic. Such experts were thus able to powerfully reinforce journalists&#39; initial assumption that this was an al-Qaeda inspired attack and the &#39;war on terror&#39; narrative took hold. 3. Conformity. Given the apparent consensus of views, no expert or commentator wanted to be the lone dissenting voice: it was safer to risk being wrong with the masses than risk being wrong on their own. This was reinforced by the fact that many of the experts first called upon for comment and opinion were largely interested in international terrorism and Islamic extremism. If discussion had focussed on exploring all the likely possibilities, rather than trying to conclude who had committed the attack, then experts on the Scandinavian far-right should also have been called upon and a different narrative might have emerged. The cognitive biases and social pressures outlined above are well-documented, and are processes we are all susceptible to unless efforts are made to avoid them. When news of the attacks in Norway broke, Open Briefing stripped away all assumptions and asked five sets of questions in its initial assessment. It is suggested that these questions form the basis of future assessments in the aftermath of suspected terrorist attacks so that the traps that led to the failures in reporting of the attacks in Oslo and UtĂ¸ya might be avoided. Were there any concrete warnings or specific intelligence beforehand of a possible attack? Though this information may not be in the public domain, security officials, country experts, and open sources (such as social media and websites) might suggest possible suspects. However, analysts must be careful not to look solely for evidence that supports their initial assumption; as noted above, seemingly conclusive, but nonetheless misleading, links can be easily made. Has any individual or group claimed responsibility for the attack? Even if a group is reported to have claimed responsibility, this must be treated with caution and the answers to the other four questions carefully considered. (In a posting on the Arabic jihadi forum Shmukh, a representative of Ansar al-Jihad alAlami wrongly claimed responsibility for the Oslo attack â&amp;#x20AC;&amp;#x201C; a claim he later withdrew.) Are the authorities searching for a specific suspect or group and/or do they have someone in detention or killed at the scene? Although the police and authorities may be slow to release information in the hours following an attack, it is possible that they will release information relating to suspects they are pursuing in order to enlist public vigilance. Obviously the identities of any suspects killed at the scene, if known, will also provide clues as to likely perpetrators and motives.

Who, if anyone, do the targets selected and the tactics used point to? The apparent targets should be reasonably clear and an assessment can be made as to whether they were military, political, economic or civilian in nature. The tactics used should also become reasonably clear fairly soon after the attack, including whether this was a mass casualty suicide attack or not. Different groups favour different modi operandi and information about the targets selected and the tactics used can help suggest one group as a more likely possibility than another. Are there any national or regional security trends pertinent to the country where the attack occurred that suggest a possible group or motive? Terrorist attacks are often related to specific local grievances, such as issues of nationalism and occupation. (In Europe, for example, the overwhelming majority of terrorist attacks in recent years are attributable to separatist movements in Spain and France according to Europol data.) Al-Qaeda inspired international terrorism is actually relatively rare, and so local causes and groups should be carefully considered first. Detailed knowledge of the security dynamic in the targeted country is needed – something that most commentators will not have and so country experts should be called upon. In the immediate absence of any clear suspects from most of these questions, it was question four that pointed Open Briefing towards far-right extremism as a likely motive. It is important to note, however, that others asking themselves these same questions might still have made a connection to al-Qaeda and the like: question five raised the issues of Afghanistan, Libya, Mullah Krekar and newspaper cartoons already mentioned. But considering the tactics and politically-motivated targets, in particular, should have led many more experts to raise the possibility of domestic far-right extremism than was apparent in the early media reporting. For their part, rather than trying to hone in on a single conclusion, journalists and broadcasters should have widened the discussion to have allowed more space for far-right extremism and other possibilities to have been explored. Unfortunately, this has all happened before. Many initial reports after the 1995 Oklahoma City bombing suggested Islamic terrorists were to blame; it quickly transpired that the bomber, Timothy McVeigh, was actually a right-wing survivalist. Similarly, speculation in the media after the 1996 Atlanta pipe bomb attack blamed Islamic terrorists; when the bomber, Eric Rudolph, was eventually caught it became clear he was actually an anti-abortion Christian extremist. Such erroneous conjecture unnecessarily perpetuates prejudices against the suspected community – in this case Muslims – and places individual members of that community at risk of verbal or physical retaliation (as Norwegian media reports suggest happened in Oslo in the hours immediately after the 22 July attack). Furthermore, even when this conjecture is corrected, the human tendency to give more weight to early information and the strong persistence of discredited beliefs can sometimes give rise to conspiracy theories or the false impression in some people&#39;s minds that the suspected group were at least somehow associated with the attacks. Unless journalists and experts are not more thoughtful in future, there is every possibility of the mistakes in the reporting of the attacks in Oslo and Utøya being repeated again. One must ask: in whose interest would that be?

This briefing was prepared by Chris Abbott, the founder and Executive Director of Open Briefing, and published by the organisation&#39;s political violence and dissent desk. Copyright © Open Briefing, 2011. Some rights reserved. Published under a Creative Commons BY-NC-ND 3.0 Licence.

Open Briefing What makes us different?

Open Briefing is a new organisation that will be publicly launched in September 2011. It is the world&#39;s first civil society intelligence agency; an accessible platform for insight and analysis on key defence, security and foreign policy issues. We provide open source intelligence assessments and independent security briefings, so that a better informed civil society can properly engage with peace and security debates and influence positive policy developments in these areas. Open Briefing is different in seven key ways: Open Briefing applies an adapted intelligence cycle to drive activities. Our work is shaped by a process of planning, collection, processing, analysis, dissemination, and feedback. Open Briefing emphasises the evaluation of sources. All items filed by us are assessed using our unique RC(C) Evaluation System for evaluating reliability, credibility and confidence. Open Briefing focuses on atypical sources. We focus on information and analysis not being covered by the mainstream media. Open Briefing promotes a fact-based worldview. Too much policy development is underpinned by ideology-led worldviews; our work is guided by rigorous research in order to promote evidence-based policies. Open Briefing recognises the role human psychology plays in defence, security and foreign policy. We never underestimate the role of personality, interpersonal relationships, social pressures and cognitive biases when we undertake an analysis of trends or events. Open Briefing incorporates social media into everything it does. We use new communication technologies to complement traditional dissemination strategies and allow users to access our material how they want, when they want. Open Briefing is committed to full disclosure, transparency and accountability. We never accept funding from individuals or groups who might jeopardise the independence or integrity of the organisation.

This media briefing seeks to explain the processes that led to the failures in the reporting of the July 2011 attacks in Norway and proposes a series of questions that journalists and experts might ask themselves in the aftermath of suspected terrorist attacks in future.